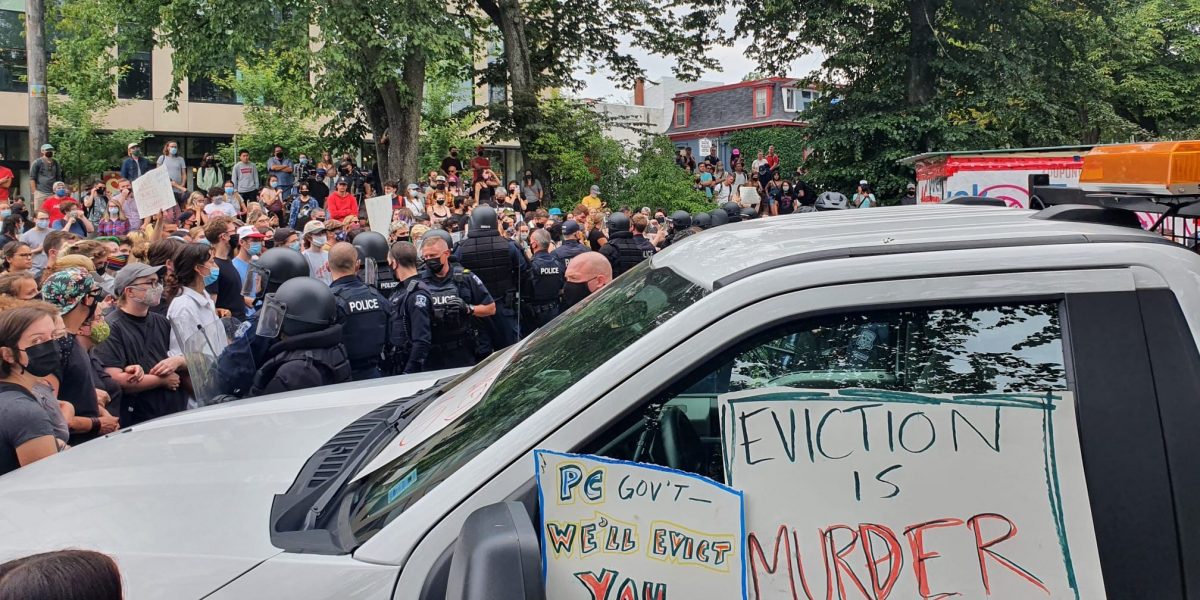 The Halifax Regional Police displaced nearly 50 people when they removed dozens of tents and wooden shelters from parks and green spaces on Wednesday.

In a statement, the Halifax Regional Municipality said that they are offering support to those displaced by the raids through Street Outreach Navigators and housing support workers.

In an earlier statement, the HRM claimed that they are committed to an “empathy-based approach to homeless encampments” that would recognize the dignity of people forced into homelessness while ensuring everyone’s safety.

Despite the claims of the HRM, many people who were evicted said that they were either not offered any support at all or were not told what the support would entail. People being evicted from the encampment at Victoria Park said that the shelters are all full and that they did not know where they would go.

People staying at the encampments were issued tickets of $237.50 for “camping in parks without permission” under city By-Law P-600. Many of them also had belongings taken from them and thrown away, and in some cases were told to leave the peninsula.

In the process of forcefully evicting people and destroying their shelters, the HRP shot pepper spray at people, forced people to the ground, and arrested 24 people. Paramedics were called in to provide medical attention to people who were injured by the HRP. According to several witnesses, the HRP directly struck two children with pepper spray. Many of the police officers removed their name tags.

This comes the day after the Progressive Conservative Party formed a majority government in the Nova Scotia election. While Halifax Mayor Mike Savage said the timing of the evictions had nothing to do with Tuesday’s provincial election, the results of the election have important implications on all of this.

Nova Scotia premier-designate Tim Houston has reiterated that he does not support rent control, signalling an end to the 2% rent cap and thereby forcing more people into homelessness. Houston said that his government’s approach to increasing housing stock would be to lease and sell off public land to developers. Additionally, Houston has not said anything about what his government would do to address the immediate needs of people currently forced into homelessness.

Landlords versus the rest of us

In a questionnaire recently published by Adsum for Women & Children, the PCs repeatedly state their support for private landlords, saying they would deregulate the housing market and give corporate handouts to developers.

This will enrich landlords at the expense of tenants beyond what we have seen so far. In 2020, landlords raised people’s rents in the HRM by over 4% on average, in some cases nearly doubling. CAPREIT, a real estate investment trust that owns many rental units in the HRM, reported a large increase in profits the same year.

Meanwhile, people in Nova Scotia have the lowest after-tax income in all of Canada. Income assistance rates and disability benefits in the province are far below Canada’s official poverty line, and they continue to decrease when compared to inflation. The provincial minimum wage has not kept up with the Low Income Cut Off used by Statistics Canada since it was $10 an hour in 2011. Overall, average hourly wages have barely budged in 40 years. Rent increases continue to rise further above people’s incomes.

As a result of Houston’s pro-landlord politics, there will likely be a large wave of evictions and a massive increase in the number of people forced into homelessness. The actions of the HRM and the HRP on Wednesday offer a glimpse of what many more people could face, starting with the most vulnerable. This could be seen as a test for what those in power are able to do to people and get away with.

This could also be seen as a test for how capable our communities are of caring and fighting for each other. With short notice, several hundred people gathered at the site of the old library on Spring Garden Road to resist and bear witness to people’s shelters being destroyed. Many people continue to gather at other encampments where more people are vulnerable to police attacks. These actions offer a similar glimpse into how we can struggle together for a better world.

Halifax Mutual Aid and Abolish the Police – Halifax/Kjipuktuk have started a GoFundMe to help cover fines. This fund will also cover bail expenses as needed for community organizers and people staying at the encampments who were arrested.