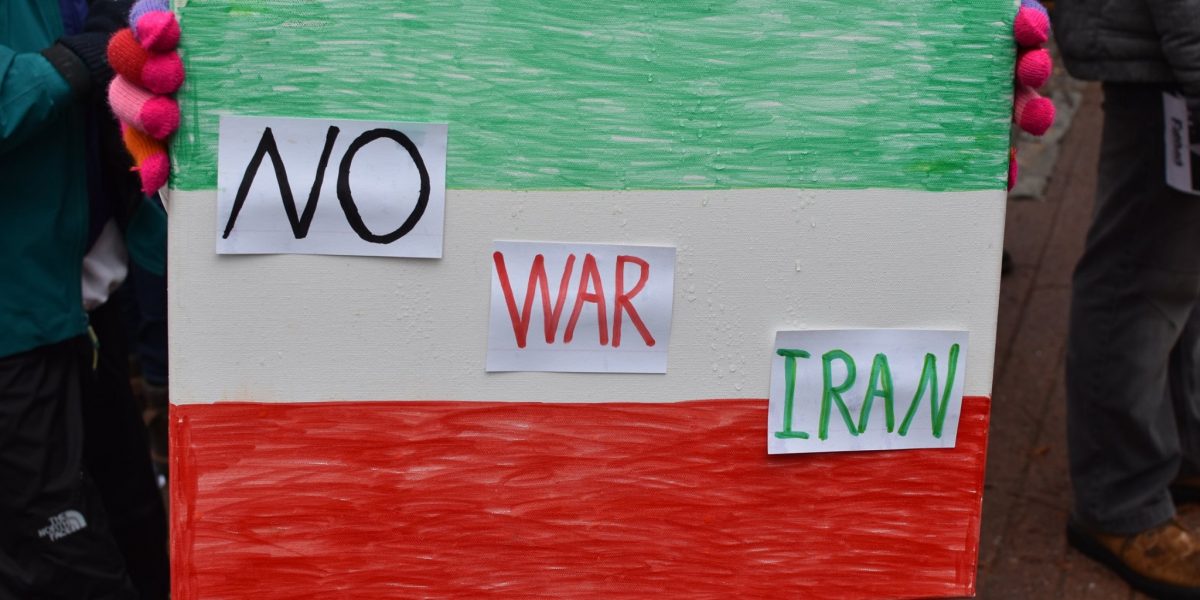 Close to 200 people rallied in Toronto on January 25 for the Global Day of Protest: No War on Iran. More than one hundred cities around the world marked the day, including about a dozen across Canada and Quebec. While the location of the Toronto rally, across from the United States Consulate on University Avenue, highlighted opposition to ongoing American efforts to thwart Iranian sovereignty, speakers and participants did not let the Canadian government off the hook, either.

Amid intermittent chants of “De-escalate! Spread love, not hate”, “Money for education, not for war”, and “From Iran to Wet’suwet’en, no war for oil!”, speakers from a variety of backgrounds urged those in attendance to continue the pressure against war and sanctions. The rally was co-MC’d by Saman Tabasinejad, the lead organizer of the January 4 “No War on Iran” rally in Toronto and an activist in the Iranian-Canadian community, and James Clark, a member of the Toronto Coalition to Stop the War.

The first speaker at the rally was Suzanne Weiss, a member of Independent Jewish Voices and a long-time Palestine solidarity activist. Suzanne recounted her childhood memories of World War Two in France to bring home the message of the horrors of war:

“Trump is threatening war, but most Canadians polled are opposed. Sanctions are crippling the Iranian people. The US has never forgiven the Iranian Revolution of 40 years ago that brought down the US-backed Shah. We say respect the sovereignty of Iran, and of Venezuela and of Bolivia, too! Instead, the US wants Iran to be one of its satellites. Respect Iranians to choose their own way.”

The next speaker was Pouyan Tabasinejad, a member of the Iranian-Canadian Congress (ICC) in Toronto:

“There are 300,000 in the Canadian diaspora and the Congress is their link to Iran. We see the inhumane effects of the sanctions, and shame on all political parties in Canada that support the sanctions. There is a real fear and anger that Trump threatens to turn Iran into Iraq, Libya, and Syria. We know the warmongers couldn’t care less about the Iranian people or any of its protests. The best way to support the Iranian people and their right to self-determination is to stop the sanctions and war.”

Another speaker was Nicholas Thompson, vice-president of the Greater Toronto Area Council of the Public Service Alliance of Canada and president of the Union of Taxation Employees, Local 48:

“We need sovereignty and equality of all members of the United Nations Charter, so why is Canada supporting American interference and aggression? Respect the self-determination of Iran and call on the Canadian government to demand de-escalation. It is a shame that Canada has troops in Iraq, so bring home the troops today. Spend funds on public services and better wages, not war.”

The next speaker was Kim Fry, a member of the Elementary Teachers of Toronto (ETT), which is participating in the rotating strikes against Doug Ford’s education cuts, and co-chair the ETT’s political action committee. Kim has been active in the anti-war movement since the mobilization against the Iraq War in 2003.

“We need to link the teachers’ strike against cuts with the funding of war. Teachers have a role in developing critical thinking, and the government wants to get rid of critical thinking. We know that mass mobilization works. We need to support all workers everywhere and link all struggles. Today is part of a longer anti-war and anti-colonization legacy. Youth are saying no to war, no to climate change, and no to this economic system.”

“We have been in Syria and Iraq and see how Exxon Mobil destroys the soil. Why isn’t the Canadian government speaking out against war? It is no surprise because this government has been engaging in war against indigenous peoples for over a hundred years. Today they are threatening the Wet’suwet’en people.”

Matthew Green, the New Democratic Party Member of Parliament for Hamilton Centre, reminded the crowd of the impact of elected leaders who publicly opposed the Iraq War in 2003 and committed himself to opposing a war on Iran:

“Those who rabidly call for wars are the least likely to fight or to die in them, but are the most likely to profit from them. It is up to the Iranian people and the Iraqi people to decide the futures of their countries. We know the failure of every imperialist war. Every parliamentary discussion will lead to either peace or war. I’m here to listen and learn. I’ll never vote to send troops in. No more ‘maple-washed’ vision of peace when we fight in proxy wars. Organize door to door and teach a new generation to increase solidarity and to increase resolve to fight against war.”

York University student Nasim Asgari is a well-known poet, performer, and spoken word artist who published her first poetry collection, what was swept under the persian rug, in 2018. After performing several pieces, she asked:

“Why has the Iranian Consulate in Canada been closed the last ten years? I and we (Iranian Canadians) don’t want to be here, but we stand in solidarity with Iraqis fighting to get rid of US troops. We support Indigenous people when their land is occupied.”

From one of her poems, Nasim said:

“The tunnels we dig will be visionary. If they stop my way, let them know I’m ready. I told them to never come after us, because they’ll never catch up.”

Lyn Adamson, co-chair of the Canadian Voice of Women for Peace, made the connection between climate change and war:

“We need funds to fight climate change and build social systems around the world. The Canadian government supports NATO and the US, which means they’re not fighting against nuclear weapons. They should stop spending $38 billion on the military. By contrast, they only spend $1 billion on the environment. We need a New Green Peaceful Deal. We need climate and peace.”

The final speaker was Ali Mallah, a founding member of the Toronto Coalition to Stop the War and a former executive member of the Canadian Arab Federation:

“Everything we said in 2003 was true. Islam is not the enemy. We worry about foreign interference in elections but we are okay with Western interference in the Middle East. There were one million people in the streets of Baghdad yesterday calling for the removal of US troops, but there was no coverage in the mainstream media, which is complicit in the war agenda. I am proud to be shoulder to shoulder with all of you to re-new the anti-war movement. There is space for all if we all agree on no sanctions and no war. This method worked in 2003 to keep Canada out of Iraq. We need to spread our rallies to many Canadian cities. Long live freedom and solidarity. The people united will never be defeated!”

Following the speakers, James thanked the crowd for joining the rally:

“We give a shout-out to every single one of you who has come here today, who come out on your own time, who volunteer every single day of the year to advocate for peace and for justice. We stand on the right side of history. We stand for peace, and for democracy, for all oppressed people around the world. So let’s have a huge cheer of solidarity for all of you!”

Saman closed the rally by acknowledging all the groups that participated in the rally and by inviting everyone to continue mobilizing against war:

“We need to remember that these rallies are just the beginning of our movement, and that our spirits won’t be dampened by a little rain. Just as we did during the Iraq War protests in 2003, we’ll keep organizing and mobilizing and building to make sure Canada doesn’t join another US-led war. Talk to your family and friends and co-workers about why they need to join our movement, and take a few minutes to contact your Member of Parliament to tell them to speak out against sanctions and war on Iran.

“No war on Iran! End the sanctions now!”

For more information about upcoming anti-war events in Toronto, or to send a message to your Member of Parliament, please visit this website.

Spring Magazine is hosting two meetings on Iran. We invite you to join us:

See more photos from the rally by clicking here.