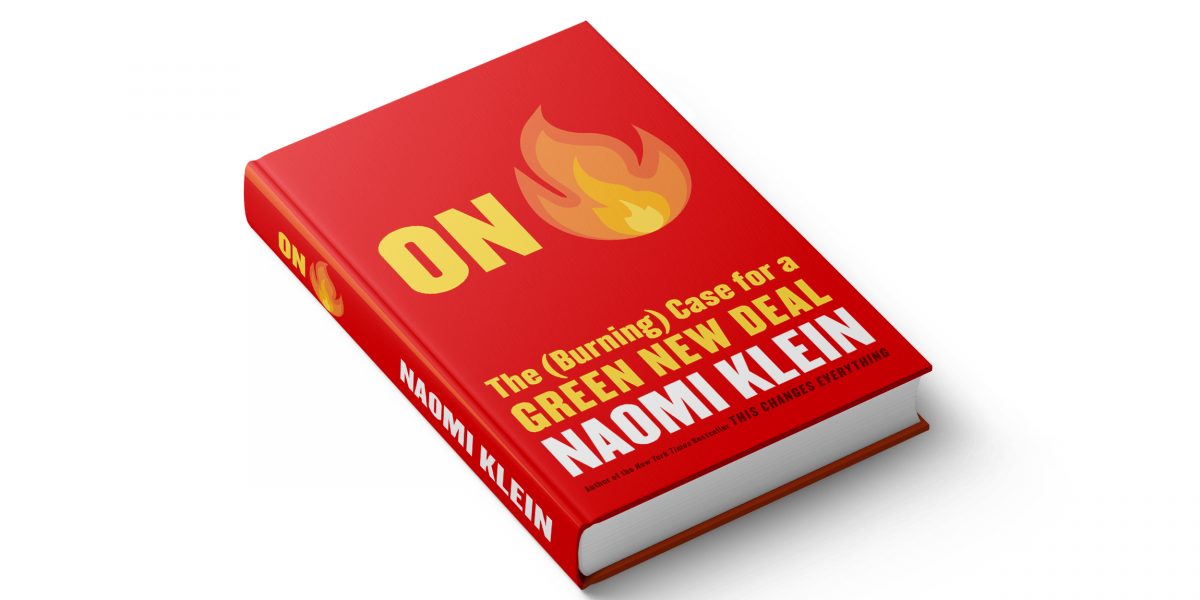 Naomi Klein’s This Changes Everything: Capitalism vs the Climate was published in 2014 in the lead up to the massive People’s Climate March. Her latest book, On Fire: the Burning Case for a Green New Deal, was published in the lead up to the historic climate strikes of September 20-27. The timing is not coincidental: Naomi Klein has become the leading theorist of the climate justice movement because of her involvement in the movement—from documenting disaster capitalism, to launching the Leap Manifesto, to now writing a book to help fight for a Green New Deal.

Over the years she has reflected and contributed to the radicalization that has shifted an environmental movement focused on individual consumerism to one fighting for global climate justice. She has done so by raising the profile of other movement leaders: her latest book is dedicated to Secwepemc leader Arthur Manuel, has an introduction quoting climate striker Greta Thunberg, and includes a description of a video project she did with congresswoman Alexandra Ocasio-Cortez. On Fire includes articles and talks from the past decade, and new writing on the green new deal and climate strikes, which reflect “the evolution of my own analysis as I tested these ideas out in the world and worked in collaboration with countless friends and colleagues in the global climate justice movement.”

In 2001, her first book, No Logo: Taking Aim at the Brand Bullies reflected the anti-globalization movement and focused on big brand corporations—but left open the role of the state. In 2007, in the wake of the Iraq War, The Shock Doctrine: the Rise of Disaster Capitalism looked at the ways in which the state uses violence to further corporate interests. But its focus was on neoliberal ideology that has supposedly highjacked the welfare state: “I am not arguing that all forms of market systems are inherently violent. Markets need not be fundamentalist. Keynes proposed exactly the kind of mixed, regulated economy after the Great Depression.” Influenced by the Indigenous-led climate justice movement, This Changes Everything in 2014 looked centuries further back to the rise of capitalism: “The things we must do to avoid catastrophic warming are no longer just in conflict with the particular strain of deregulated capitalism that triumphed in the 1980s. They are now in conflict with the fundamental imperative at the heart of our economic model: grow or die.”

We can see hints of this evolution through On Fire. The first articles written in 2011 calls for “shredding the free-market ideology that has dominated the global economy for more than three decades” and of “reregulation of the corporate sector.” But in a 2016 article about the origins of the Leap Manifesto she writes that “we couldn’t fall back on a vision that was nostalgic or backward looking—a prelapsarian yearning for a seventies-era nation that that never respected Indigenous sovereignty and that excluded the voices of so many communities of color, that often put too much faith in a centralized state and never actually reckoned with ecological limits.”

In the introduction, she argues that to stop climate change we need to address its roots: “modern capitalism, the economic system of limitless consumption and ecological depletion, is at the heart of the climate crisis. It’s a story that begins with people stolen from Africa and lands stolen from Indigenous peoples, two practices of brutal expropriation that were so dizzyingly profitable that they generated the excess capital and power to launch the age of fossil fuel-led industrial revolution and, with it, the beginning of human-driven climate change.”

Failure to address these issues have not only prevented effective climate action but given support to even worse policies: “The biggest green groups have avoided, with phobic precision, any serious debate on the blindingly obvious roots of the climate crisis: globalization, deregulation, and contemporary capitalism’s quest for perpetual growth…far from learning from past mistakes, a powerful faction in the environmental movement is pushing to go even further down the same disastrous road…Nuclear power and geoengineering are not solutions to the ecological crisis; they are a doubling down on exactly the kind of short-term hubristic thinking that got us into this mess.”

Reflecting the Black Lives Matter and migrant justice movements, she warns that the biggest danger is not those who claim to deny climate change, but those whose version of “adaptation” can only be described as “climate barbarism”: “a culture that places so little value on black and brown lives that it is willing to let human beings disappear beneath the waves, or set themselves on fire in detention centers, will also be willing to let the countries where black and brown people live disappear beneath the waves, or desiccate in the arid heat…What starts as brutality at the border will most certainly infect societies as a whole”

Klein also reflects growing debates about radical alternatives, and what it means to be socialist. “Soviet-era state socialism was a disaster for the climate. It devoured resources with as much enthusiasm as capitalism, and spewed waste just as recklessly…China’s command-and-control economy continues to be harnessed to wage an all out war with nature, through massively disruptive mega-dams, superhighways, and extraction-based energy projects, particularly coal.” It’s true these regimes were as bad as capitalism because they were capitalism: state capitalism, based on a counter-revolution against socialism. But calling regimes socialist when they were state capitalist, or left populist, leads to supporting traditional social democratic governments: “Autocratic industrial socialism has also been a disaster for the environment…and Venezuela’s petro-populism is a reminder that there is nothing inherently green about self-defined socialism. Let’s acknowledge this fact, while also pointing out that countries with strong democratic-socialist traditions (like Denmark, Sweden, and Uruguay) have some of the most visionary environmental policies in the world.”

Klein supports “the surge of movement-grounded politicians and political candidates who are advancing a democratic eco-socialist vision,” but this is not the first time that radical candidates or parties have emerged. She mentioned Venezuela and there was also the Workers Party in Brazil during the anti-globalization movement, or Podemos and Syriza in response to the economic crisis. All these have offered hope but have ultimately chosen to rely on the state. This is where Indigenous socialists play a key role: “From this we can conclude that socialism isn’t necessarily ecological, but that a new form of democratic eco-socialism, with the humility to learn from Indigenous teachings about the duties to future generations and the interconnection of all life, appears to be humanity’s best shot at collective survival.”

While promoting radical politicians like Alexandria Ocasia-Cortez, Klein makes it clear that “movements will make or break the Green New Deal.” As she explain, “any administration attempting to implement a Green New Deal will need powerful social movements both backing them up and pushing them to do more. Indeed, the single largest determining factor in whether a Green New Deal mobilization pulls us back from the climate cliff will be the actions taken by social movements in the coming years. Because as important as it is to elect politicians who are up for this, the decisive questions are not going to be settled through elections alone.” Whereas her earlier works promoted Keynes and only briefly mentioned the movements that pushed Roosevelt to deliver the New Deal, On Fire looks in more detail at the movements then and now:

“It must be remembered that President Franklin D Roosevelt rolled out the New Deal in the midst of a historic wave of labor unrest: There was the Teamster Rebellion and the Minneapolis general strike in 1934, the eighty-three-day shutdown of West Coast ports by longshore workers that same year, and the Flint autoworkers sit-down strikes in 1936 and 1937…The New Deal was adopted by Roosevelt at a time of such progressive and left militancy that its programs (which seem radical by today’s standard) appeared at the time to be the only way to hold back full-scale revolution…Right now, civil society is nowhere near as strong or as organized as it was in the 1930s, when the huge concessions of the New Deal era were won—though there are certainly signs of strength, from movements against mass incarceration and deportation, to #MeToo, to the wave of teachers’ strikes, to Indigenous-led pipeline blockades, to fossil fuel divestment, to the Women’s Marches, to School Strikes for Climate, to the Sunrise Movement, to the momentum for Medicare for All, and much more.”

To rebuild workers struggles they need to be infused with the climate movement, and Naomi Klein has played an especially important role in articulating the climate justice demands for green jobs. As she writes, “climate justice also means that workers in high-carbon sectors, many of whom have sacrificed their health in coal mines and oil refineries, must be full and democratic participants in this justice-based transition. The guiding principle must be: No worker left behind.” In addition, she credits the Leap Manifesto meeting for expanding the concept of green jobs (though she made these points before at a speech at Unifor’s founding convention in 2013)—which has been helpful for the Fight for $15 and Fairness and the movement for decent work: