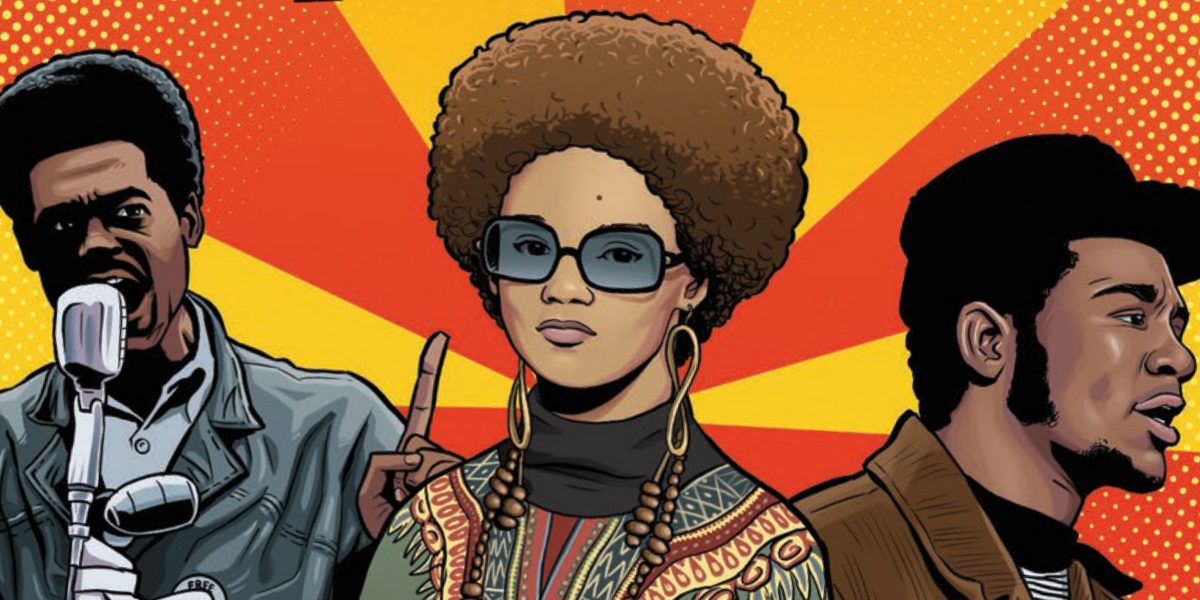 In the afterward of David F. Walker and Marcus Kwame Anderson’s The Black Panther Party: A Graphic Novel History, Walker notes how painful it was to write this book in the shadow of George Floyd, Ahmaud Abery, and Breonna Taylor’s death at the hands of the police.

Writing this book broke my heart. Spending day after day researching and writing about all this death and violence took its toll. Piecing together the events that led to the deaths of Bobby Hutton, 17, and Fred Hampton, 20, left me in tears. Similarly, I know it wasn’t easy for Marcus to draw this book. We talked about the significance of this work, and we checked in on each other often because, inevitably, there was always a senseless killing of a Black person in the news. These killings left us concerned about the safety of our own family and friends and they underscored how nothing had truly changed since the 1966 killing of Denzil Dowell.

The writing and release of this powerful graphic novel is especially important now, in the shadow of the 2020 uprising for racial justice, since those fighting for a better world are trying to figure out how we can actually destroy the structures of white supremacy (be it the police, the courts, or the industrial prison complex). For a few brief years, the Oakland-based Black Panther Party tried to build a mass organization deeply rooted in African American communities, working in solidarity with other marginalized communities of colour, unapologetically challenging the most heinous forces of state violence and oppression. Learning from their experience, their successes and failures, is essential for revolutionaries today trying to build upon their work.

The Black Panther Party: A Graphic Novel History is quite an exhaustive history of the emergence of the organization. It frames the story by exploring how the failed expectations of the Great Migration northward at the end of the First and Second World Wars left a generation of young African Americans angry with the structures of racist oppression and frustrated with the Civil Rights movement’s inability to curtail police brutality and economic injustice. In this context, Huey P. Newton and Bobby Seale formed a tiny group, the Black Panther Party for Self-Defense in Oakland, California, eager to introduce more revolutionary politics into the struggle of African Americans.

Over a very short period, the organization grew dramatically, attracting young people dissatisfied with more conformist elements in the Civil Rights movement. The Panthers willingness to patrol and confront police forces harassing and attacking their community, and to organize important mutual aid programs—like the free breakfast and education programs for African American children in Oakland—attracted thousands of radicalizing youth. Chapters grew in different municipalities, with key branches set up in Chicago and New York, inspired by what Newton and Seale were doing in California. The Black Panthers became a leading organization on the Left and began to inspire well beyond the ranks of its members.

Walker and Anderson take deep dives into all the key players who would form part of the Black Panther leadership. However, they take special care to highlight the work of women comrades. The Black Panthers are often dismissed as patriarchal and there is a certain truth to how easily women members were not taken seriously and pushed aside in favour of male members. However, women always took on important leadership positions in the organization and the book spends time introducing readers to the likes of Tarika Lewis, Elaine Brown, Kathleen Cleaver, Ericka Huggins, Assatta Shakur and of course Angela Davis.

The most striking elements of the book are the detailed accounts of how the FBI’s COINTELPRO disrupted the activity of the Black Panthers. Although relatively small, with limited roots beyond a few cities, FBI Director J. Edgar Hoover felt threatened by the growth of the Marxist-inspired Black Power messaging of the Panthers and used enormous resources to destabilize the leadership. Local police forces, in coordination with the FBI, recruited informants to infiltrate the Panthers and groups they worked with. These informants helped exploit political divisions inside the Panthers and stoked violent interaction with others they worked with. In some cases, they even played an active role in killing important leadership figures. The police murder of Chicago Panther Fred Hampton is the most notorious example of this.

Walker and Anderson account for the significant political debates and divisions inside the Party that played an important role in the eventual demise of the organization, but it was the state intervention against the Panthers that was the most devastating. The leadership of the party faced constant harassment, arrest, imprisonment, and deadly violence from the state. It was impossible for the Panthers to remain effective as a political organization with its head constantly chopped off, despite the best efforts of comrades trying to fill in for persecuted leaders.

The Black Panther Party: A Graphic Novel History is an essential primer for those wanting to learn more about the most radical political forces from the 1960s, to understand the political debates that were had and continued to be had regarding how we overcome/destroy white supremacy and capitalism. It is essential to understand the extent the state will go to stop any attempt to challenge the status quo. A beautifully illustrated book (maybe too much so, to be honest, a grittier aesthetic may have worked better), this is an accessible and compact way for us to learn about the revolutionary tradition of the Black Panthers and talk about the lessons revolutionaries today can learn from their tragic experience.