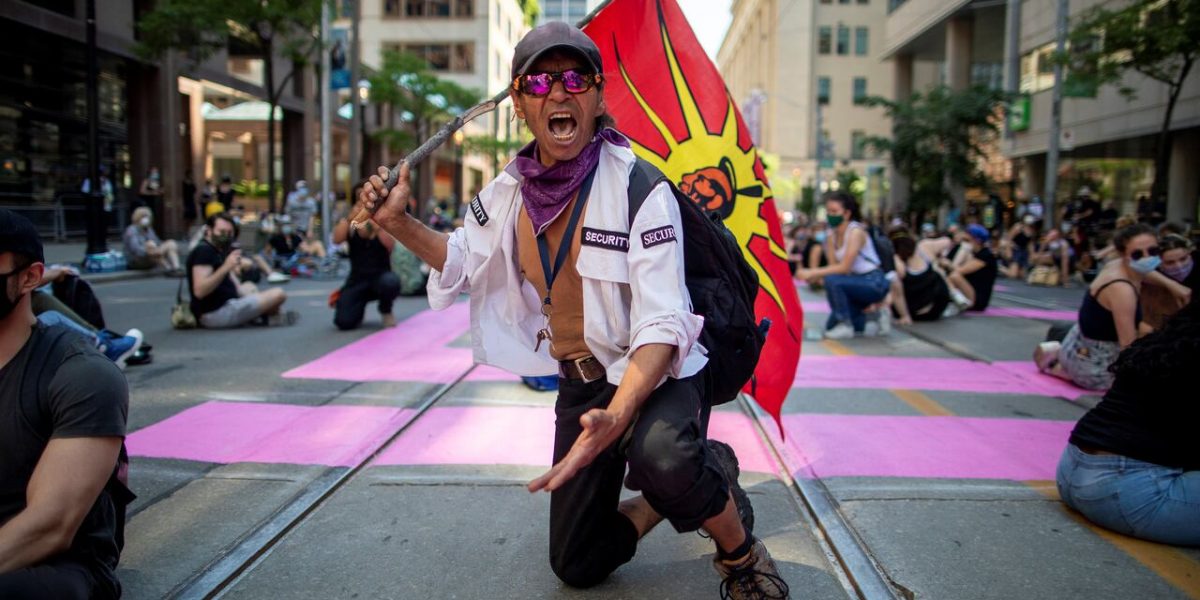 Gary Wassaykeesic, a Land Defender from the Mishkeegogamang First Nation north of Thunder Bay has lived in Toronto for decades and is an Indigenous leader. He was arrested on January 30, 2022 for allegedly taking part in a solidarity action with Wet’suwet’en on November 21, 2021 in Toronto. He was required to report last week to an isolated CP Rail police detachment in Scarborough. Beyond these disturbing facts is the story of a cultural group still being criminalized and harassed on their own land, but also the story of a diverse community determined to unite in support and resistance.

Coastal GasLink (CGL) is currently constructing a pipeline through Wet’suwet’en Territory without any consent, and the Hereditary Chiefs have sent an eviction notice to CGL. As they explained, “Coastal Gaslink has violated the Wet’suwet’en law of trespass, and has bulldozed through our territories, destroyed our archaeological sites, and occupied our land with industrial man-camps. Private security firms and RCMP have continually interfered with the constitutionally protected rights of Wet’suwet’en people to access our lands for hunting, trapping, and ceremony.” But instead of respecting Indigenous law, the RCMP enforced colonial law: on November 18 and 19, the RCMP raided Wet’suwet’en Territory using assault rifles, attack dogs, and even chain saws. They violently arrested over 30 people, including Land Defenders, supporters, legal observers, and journalists.

In response to the arrests in Wet’suwet’en, Land Defenders in Toronto went to the railroad on November 21. For two hours people blocked a train, sending a message of solidarity to those who’d been arrested. Though police were present at the blockade, at no point on that day did they express any concerns. They did not declare it an unlawful assembly and made no arrests. But a week later they began targeting organizers. The Toronto Police showed up at the home of Indigenous Land Defender, Vanessa Gray, and told her she had to turn herself in for attending that event. A week after that, they ticketed Miguel Avila-Velarde with a fine of over $600.

Police also began following Gary Wassaykeesic from November until the end of January. On January 30 they arrested him with those bogus charges that too many Black and Indigenous people find themselves charged with: “trespass and mischief”, the exact charges that colonial usurpers of this land have been guilty of themselves from the beginning. The police, and the mining companies, railroad companies, construction, and oil companies, etc. all tresspass on Indigenous land, then turn around and deliver harsh punishment against Indigenous people. Our government ignores treaties and human rights, including the right to thrive. It is so cruel and unjust to be routinely traumatized and criminalized like this repeatedly in your own homeland.

Gary spoke with me last week about the illogical charge of trespassing for an Indigenous person. Where else would he be? Where else should he be standing? This has always been the homeland of his people; and yet he has never felt any need to routinely arrest any of us for trespassing. We spoke about how governments have it all backwards since they are not the rightful authorities of this land. They have set themselves up as the legal and God-given authority, as if this entire country is their sole property when it never was. They’ve set up a network of violence to try to uphold this lie, doing everything to portray Indigenous people as if they are enemies for merely existing. This is wrong, and so is dragging out already nightmarish generational trauma into long-lasting, re-traumatizing, and unwarranted arrests.

Gary was strategically subjected to this lengthy drawn-out process of police harassment and intimidation tactics. Who gets arrested two months after an alleged criminal activity at an event where police voiced no problems in the first place? As Gary explained, “The Toronto Police stalked me, waited, and then arrested me, traumatizing me in the process. This has become the strategy of the Toronto Police. How many more others are they going to do this to?”

The timing of the arrest was also designed to increase harm and trauma: police arrested Gary after he led a vigil for the 93 children found in those unmarked graves at Williams’ Lake Residential School. They disrespected this community leader by callously arresting him right after this emotional memorial service, as he was mourning the tragic loss and discovery of mass-murdered children from his beloved community. Police heartlessness was a tactic as they watched, waited, and closed in on him shortly after the service ended, waiting until after he was separated from this gathering of fellow mourners. They timed it carefully, waiting until he took a streetcar home so they could storm onto the vehicle and violently pull him off in handcuffs. He was alone, but in front of strangers. Maybe some of the streetcar passengers could see the truth behind who was the real aggressor.

Then a month later police told Gary to report to an obscure, isolated location to get processed, hoping he’d have no real or supportive friends who would come to his aid. Gary had cooperatively provided his address to the police, but later noticed that his file stated he had “no fixed address”. What prompted their failure to make note of Gary’s actual address, and write those three words instead? They willfully replaced the facts with a mainstream stereotype (and this is falsifying police records, isn’t it?). The police wanted Gary to be deemed homeless by not recording his home address that he provided to them. Their omission added to their narrative to assume a mainstream stereotypical story about him having no friends who would care about him. Also, by characterizing him as homeless, they actually reveal the harsh truth of their intentions which indict themselves; if Gary and others of his community are experiencing homelessness, then this is entirely the fault of the colonial state which has literally stolen their homeland!

With all the harassment and legal persecution, Gary told me he’s so thankful for the group of friends and allies who showed up last week to accompany him in this continuing trauma. At least 10 of us waited for him outside, and one entered the building with Gary. When the officer demanded of her, “Why are you here?” Gary’s friend said, “I’m here to support him,” and added that she is a member of an international human rights organization. Upon hearing this, the officer decided to tone down his very intimidating attitude and lower his voice. Gary gave thanks for these caring communities willing to turn up for him, some people even risking incarceration themselves, no matter how cold and icy, no matter how early in the morning. He spoke with all his friends that day, old ones and new ones, some of whom he only just met that morning, many of whom will likely turn up to support him at his next painful court date.

In a previous Spring article I noted the ongoing genocide exposed after the discovery of hundreds of graves of residential school-children. I also recognized it to be physical, psychological, and spiritual genocide. The virulent racism of those who travelled here and systematically stole these lands from the original inhabitants, is responsible for planning and causing the death of innumerable Indigenous children. No matter how long and how much government and church leaders try to deny it, the Indigenous population have been experiencing generations of genocide.

Colonial violence continues through the disproportionate criminalization and incarceration of Indigenous people. It also continues through injustices like the high rate of Indigenous children taken into foster ‘care’ systems. Constant control of the movements of Indigenous people is inevitably the obsessive worry of usurping colonializers. Additionally, the massive wealth gained from the control and criminalization of both Black and Indigenous communities continues to be a big business priority. Gary said this is what he calls the ‘economic genocide’ of his people; and I acknowledge this economic genocide to be quite a large function of capitalism. This includes the federal government’s failure to ensure food security, clean water, or to properly fund First Nation education.

Canada will continue to fall short of reconciliation unless we can all come together alongside Indigenous people to support them. Allyship must include dis-planted people of African descent, as well as settler allies. All our lives depend on it. The aggressors and perpetrators of state-sanctioned violence may not be aware their harassment is actually building up solidarity among traumatized survivors. Our shared trauma and shared humanity results in powerful solidarity and adds strength in resistance to Gary, and his friends and allies.

Amidst the growing violence of our so-called ‘peace officers’, somehow Gary’s circle of friends continues to grow as all of us become more aware of truth. The truth of how deeply frightening it is to live in a society where some of us are literally stalked indefinitely before being charged, fined, incarcerated and beaten as if we are public enemy #1. As if we are less than human in some endless, secretly declared war. As if racialized genocide should remain some sort of natural national habit. But in reality, every single cultural member of this diverse country matters. Just like #BlackLivesMatter, and #EveryChildMatters.

Even throughout this lengthy pandemic, the state remains obsessed with the legal persecution of Black and Indigenous peoples. No doubt it will take all of us to become as equally obsessed with be-friending and defending Elders, Leaders and Land Defenders!  Instead of acting on historical cultural bias and racist division spread by capitalism and colonialism, we need more solidarity! We need more resistance to state-sanctioned violence. We need more compassion and advocacy, more cooperative, caring, and organized movements. And more friends who wield power just by showing up and declaring we are ‘here to support’.