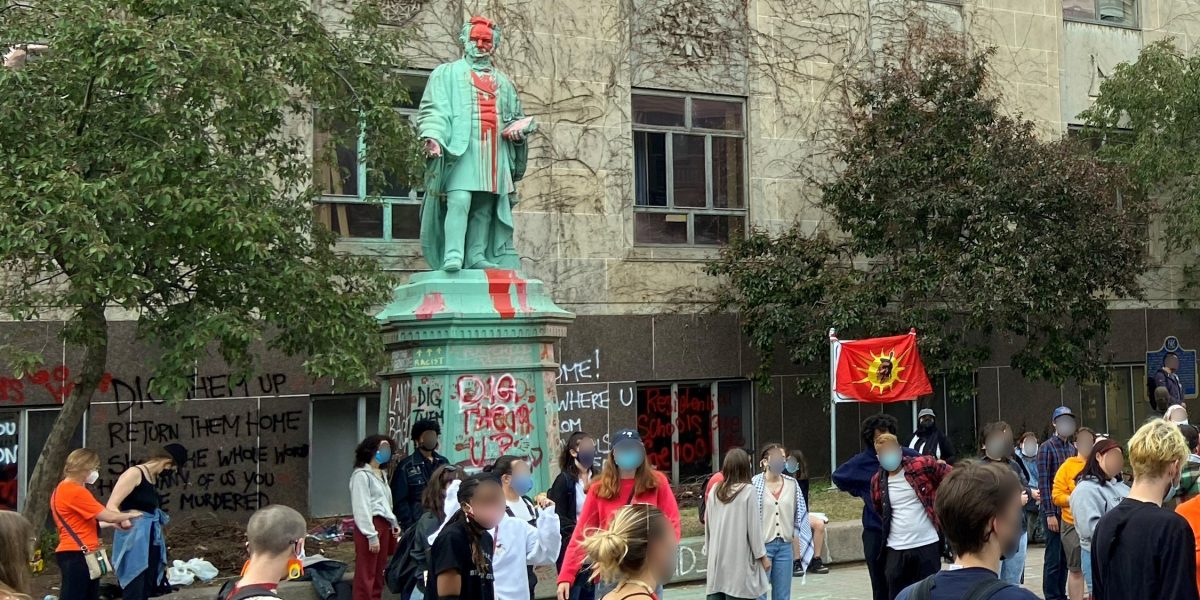 The discovery of the mass grave in Kamloops holding the remains of 215 Indigenous children is a horrendous tragedy, and we should take this time to honour and respect the untold grief of our Indigenous community. We are in solidarity in grieving for this painful loss of so many children too long missing, and finally found.

Although it’s not meant to be compared to the Humboldt tragedy, I know we all recall the extreme heartfelt sorrow we all felt empathetically in that bus accident just a few years ago where we lost kids on the way to a hockey game. As a country we were permitted to grieve long and hard about that accident, and the Humboldt families deserved all our condolences. Many felt strongly that someone should pay for that accident, and the truck-driver was ultimately arrested. It was such a horribly sad tragedy, since no one could restore the precious lives lost forever.

No one can restore the precious lives of those who died in Kamloops. But the victims’ families have been treated very differently. Throughout the years, as they knew their children would not be coming home, Indigenous families did not get to share their loss and grief with everyone in the country as others have. The victims’ families were not even believed or acknowledged when they said their children were missing. Why were we not aware of the need for empathy with the Indigenous parents who have long been grieving losses of so many of their children all this time? Will Indigenous people also be offered our country’s heartfelt comfort and condolences now that their children have been found dead? When did authorities look for these students, let alone seek someone to atone for their disappearance? Who will ever be found to pay for their death?

Not a historical accident, but ongoing genocide

But this was not an accident, it was murder plus a cover-up. Teachers and church leaders like Egerton Ryerson (who Ryerson University was named for, and who introduced the idea of residential schools) deceptively claimed to “properly educate” these children. Instead, brutal hands stole the lives of these 215 children–adding to the thousands previously discovered, and the search for more gravesites is underway.

Indigenous children were in Residential Schools up to 1996 only because they were stolen from their communities by the Canadian government. They were sitting in schools that they were forced to attend by our government. Schools made especially for them, and apparently for this end. Residential schools created by, and led by our own government leaders, our teachers, our church leaders, our women and men. Given the chilling reality of our country’s religious and educational institutions being at the root of these deaths, it’s even more painful to think how racist attitudes may make some Canadians deny the compassion that our Indigenous brothers, sisters and two-spirited family deserve.

These were our children, killed in our back yard. A Brampton podcaster Orlando Bowen noted:

“There is no us and them. There is only us, and we definitely have blood on our hands. At least 215 murdered children. All these young, innocent lives so full of hope, and alive with promise, now gone forever. And it was no accident. So I stand with all my Indigenous brothers, sisters and non-binary family in this country. Going forward, as everyone is now able to mourn worldwide, their families remain traumatized. And as yet no letters of sympathy sent; instead their own communities stigmatized. This is us, right here, and we must commit (or re-commit) ourselves now to living in a spirit of #Ubuntu [humanity towards others] here in Canada. A place where we can see the humanity in each other! Where we will all stand to defend and honour that humanity while working harder than ever to dismantle deadly systems of oppression.”

Indigenous students found in Kamloops graves are victims of the ongoing crime of genocide that the Prime Minister calls ‘history.’ Who will we ever find to even admit culpability and adopt accountability? Can’t our country find some leaders who won’t let genocide slide? Going forward, as everyone is now mourning worldwide, their families who’ve been mourning all this time are re-traumatized. And as yet no official letters of sympathy have been sent; instead Indigenous communities remain stigmatized.

Racism and oppression are killing our children. No matter how long and how much our government leaders repeatedly deny it, the ugly truth is revealed about children being murdered under the watch of our governments. It’s long past time to confront the truth of colonialism on this land. It continues through injustices like the high rate of Indigenous children taken into our foster ‘care’ system, and the federal government’s failure to properly fund First Nation education. Canada will continue to fall far short of peace until we all come together alongside Indigenous people. Allyship must include displanted people of African descent, as well as settler allies. Our children’s lives and our planet’s future depend on it.