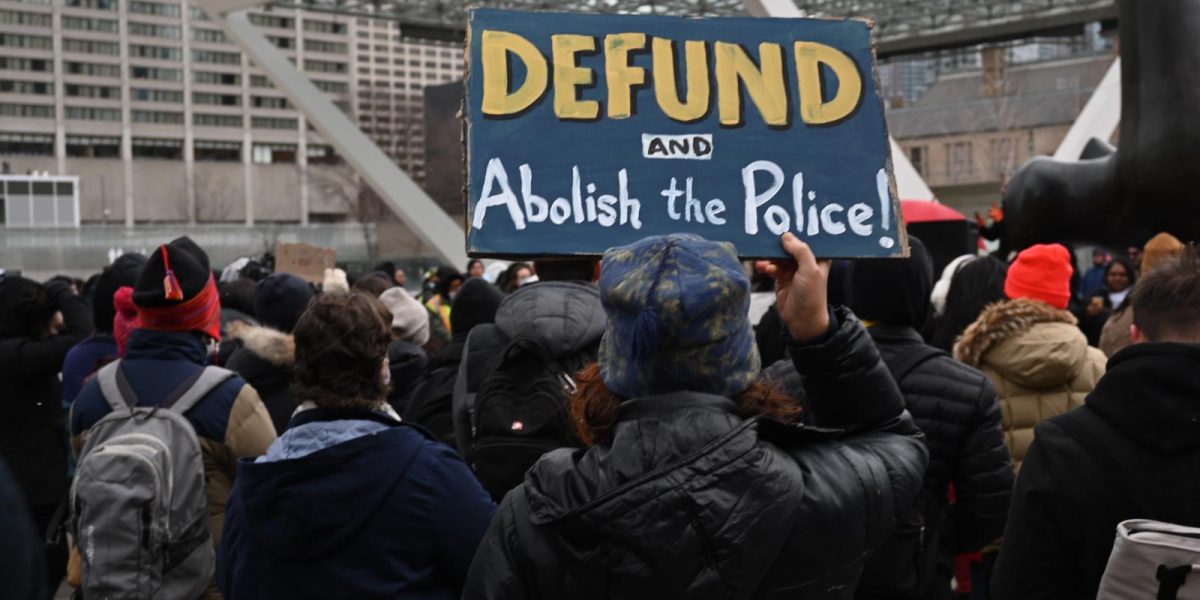 The rally was part of a month of action put together by a broad coalition of abolitionist and anti-racist organizations concerned with police violence and the hollowing out of social services, organized under the umbrella of “Another Toronto is Possible.” To that end, organizers called for the police budget to be decreased by at least 50 percent with the money going toward social services that actually provide what people need to be safe, like housing, transit, libraries, and public health.

Decades of austerity budgets have contributed to poverty and precarity in Toronto. Instead of money being allocated to services that people need to survive and thrive, Toronto’s police budget has more than doubled in the last twenty years, from $611 million in 2002 to over $1.26 billion in 2022. Even this year’s proposed transit budget increase will be used to hire fifty “special constables” to police and harass the racialized, homeless, and poor on the TTC, all while actual transit service sees cuts. Across the city, school staff (teachers, counselors, education assistants) are being underpaid and overworked, and the response to the staffing shortage has been more cops in schools instead of better pay and more hiring of actual staff.

Police violence in Toronto is not the work of individual cops in isolated circumstances, but an inevitability of life in an over-policed and under-resourced city. True public safety cannot be achieved through more policing, and especially not when those same police are largely responsible for violence against Black, Indigenous, Brown, and poor people in Toronto.

Systems of violence enforced by police

At the rally, speakers drew connections between policing and various forms of violence we face in Toronto and across Turtle Island.

Victims of police violence and their families spoke out about the violence they faced when what they needed was compassion and care. Claudette Beals-Clayton, the mother of Regis Korchinski-Paquet who died during a police encounter in May 2020, said that she sees the $50 million increase to the police budget as just another chunk of money they will use to kill others like her daughter. She summarized the emotions in the crowd with a phrase that quickly became a chant: “No more shit!”

Indigenous speakers made connections between the genocide of Indigenous peoples and the police’s role in carrying it out and enforcing it. Despite the state’s insistence upon “reconciliation,” said one speaker, the police budget increase flies directly in the face of reports like the Truth and Reconciliation Commission that name modern-day police as direct descendants of their colonial forebearers, continuing to criminalize, harass, kill, and imprison Indigenous people. Increasing policing while Indigenous services continue to be underfunded is colonialism in and of itself, and it certainly shows the city’s priorities.

Other speakers from various groups spoke about how the police budget increase would harm them. A speaker from TTC Riders pointed out that the city’s transit cuts and hiring of constables means less transit service and more harassment by police, all while the TTC has no funding for mental health supports that riders in crisis may actually need. A speaker from SMASH University of Toronto spoke about how the police, on campus and off, harass, criminalize, and assault racialized students just trying to get to class. Across all, the message was clear: increasing the police budget harms all of us, and what we really need to be safe is investment in public services, not policing.

While mayor John Tory claims that “the people of Toronto” want more policing, those same people delivered a strong rebuttal in numbers on Tuesday afternoon. As Robyn Maynard said at the conclusion of the rally: “Another Toronto is possible. We are building it today.”

The speakers at the rally made it clear that no matter where we are, our lives depend on the defunding, disarming, dismantling, and abolition of the police. Tuesday’s rally was another important step in building a world where we are all safe – a world without police.