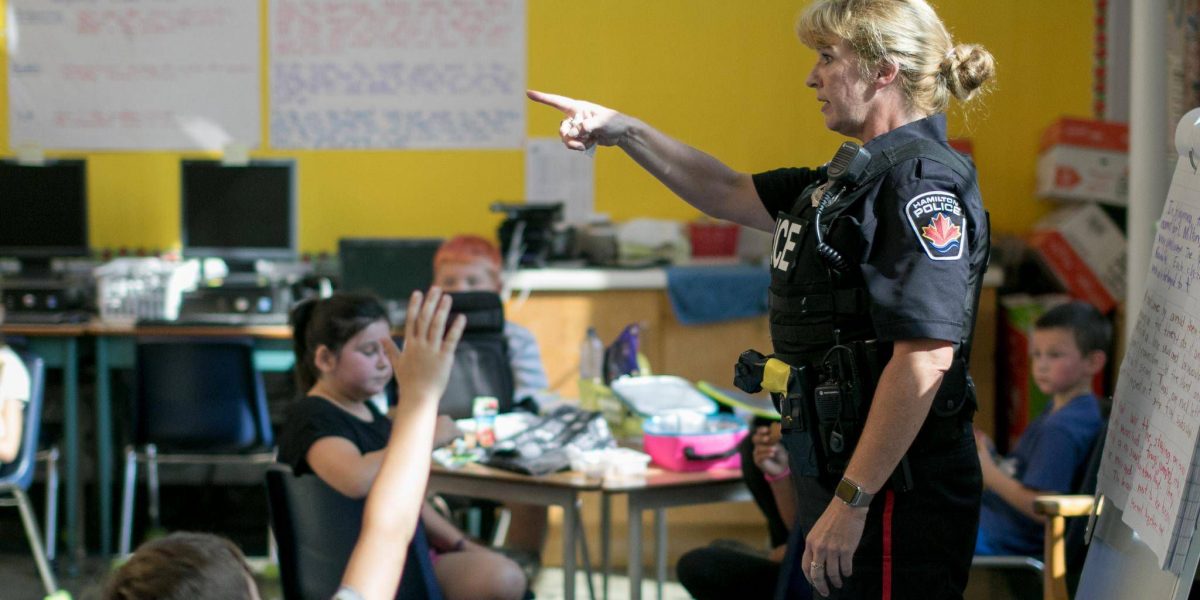 Ontario, students and education workers are sounding the alarm that schools are unsafe. Increased school violence is capturing media attention. We must see this violence in the context of decades’ worth of cutbacks that have removed teachers, support staff and resources from our schools.  It is unacceptable for government and board officials to blame the disorganization and violence caused by these cut-backs on racialized and working-class students and respond by putting police in schools. A massive investment of staff and resources is desperately needed. The call for an official police presence in schools is a repressive cop-out that must be opposed.

“We the students are unsafe. Our school is not safe. Every day we live in constant fear of what will happen,” says Khadijah Saho, a Grade 12 high school student at York Memorial C.I. She was speaking at a press conference for the York Memorial student strike on December 2nd, protesting dangerous levels of understaffing, disorganization and lack of even the most basic supplies (such as toilet paper) in the school. Students also complained of racist remarks and discrimination by staff. York Memorial merged at the start of this school year with another high school, but a York Memorial alumnus said that is no excuse for the neglectful conditions in the school. “This happened even when I was at York Memorial.  Not the exact same thing but very similar.”

Speakers shared stories of students who could not locate a teacher for their class. A parent interviewed by the Toronto Star said, “My son is in Grade 12 in a computer science class and he hasn’t had a teacher, or even a substitute teacher, for two weeks. So his class is not even happening.”

At the start of the school year, York Memorial was disrupted by severe staffing gaps. A teacher from that school, interviewed by the Star, describes the early weeks, saying that it took time before students became agitated by the disorganization. At first, the teacher says, “the majority of students were ‘extremely patient and lovely.’ But some teens could see, ‘it was a chaotic situation…They started pushing boundaries.’  Hall monitors and office staff were ‘overwhelmed,’ temporary administrators came and went, and teachers grew fearful as tensions escalated and problems mounted.”

This crisis of understaffing is not unique to York Memorial. Vice President of Elementary Teachers of Toronto, Nigel Barriffe says, “We have had reports from across the city that supply teaching positions for teachers who are sick are not being picked up.”

Another member on the Elementary Teachers of Toronto’s executive board, Elizabeth So, says that Occasional Teachers (or “OTs,” also known as supply teachers) have been “taken out of the daily OT hiring pool” to fill permanent teaching positions, but without being hired as permanent teachers.  They are still part of the fixed number of occasional teachers employed by the board.  Since they are busy filling long-term positions, “this reduces the number of OTs available to fill in for teachers who are getting sick, especially with RSV, COVID and the Flu going around.”

A similar situation exists for Education Assistants and other school support staff.  Not enough people are available to fill in for sick support workers. Bonnie Dineen, from the executive board of CUPE 4400 representing education workers in Toronto District School Board, says that her union local has long pressed the TDSB to hire a pool of permanent education assistants, based in schools with high needs, who could be dispatched elsewhere in the board when needed. “But, we were told flat-out ‘no,” says Dineen, “as the board has a ‘very robust supply list.'”

And yet jobs go unfilled every day.

One demand made by students at York Memorial is for the hiring of “more teachers who represent our student population.” The staffing shortage described above provides an opportunity for this hiring.  So far, all students have experienced is a stronger police presence.

“I have seen police in my school every single day. Sitting outside. Coming into our school with guns. I have seen police and security guards impose fear into the life of our students,” says Saho. “We wake up and wonder if we will be added to the list of criminals who will be labelled and expelled from school.”

Why are education staff not being hired to meet student needs? Press Progress reports that a survey by the Ontario College of Teachers found, “in 2021, around 4% of its teacher members were unemployed — nearly 20% reported less than full employment.”

Qualified teachers are looking for work.

Barriffe places most of the blame on the provincial government. “From the union perspective,” he says, “we see this as a symptom, an outcome, of two decades of defunding the public education system.  Defunding that started with Mike Harris and continued through successive liberal governments.

“That defunding has caused school boards to have to cut back on much of their resources including human resources such as Educational Assistants, Early Childhood Educators, and the custodians who keep the schools clean.  We are seeing fewer and fewer of them in the building.”

Bonnie Dineen, from the executive board of CUPE 4400, talks to principals and education workers daily about incidents that occur in Toronto schools.  When asked if we have enough staff to keep our students safe, she unhesitatingly said, “No.”

She described a lunchroom supervisor left to supervise 240 children in a lunchroom with no walkie-talkie.  She described understaffed special education classrooms, in which multiple children have life-threatening needs.

Dineen said that a lot of violence could be prevented by having enough staff to help children who struggle to communicate. Instead, according to Dineen, “Violence has been normalized.”

The result is that education assistants routinely come home, “covered in bite marks and bruises,” Dineen says. “And in an environment where the staff can’t keep themselves safe, how could the children possibly feel safe?”

York Memorial students are demanding more professional training for teachers on anti-racism and de-escalation. But over the years, central staff who provide professional training have been cut. In this context of cutbacks and dangerous understaffing, Doug Ford and John Tory suggest sending the police into our schools.

Two of the York Memorial student demands are to “Allocate More Resources to our School” (including human resources) and for “No Police Presence in Our School”. The relationship between these demands is evident from a review of staff positions that have been cut.  Would there even be a safety crisis without so many staff cuts?

Some of what we have lost:

The cutbacks listed above are commonly known to TDSB teachers and were confirmed by Elementary Teachers of Toronto Vice President Nigel Barriffe, unless otherwise cited.

The proportion of adults in Ontario schools has been cut drastically over the last twenty years.  Toronto District School Board is a case in point. Violence is an obvious result of these cuts.  It is unacceptable to fill staffing gaps with school police officers.

Educators and youth are publicly stating that they desperately need staff and resources. We must not allow this cry for help to be answered with police repression.

To view the full York Memorial C.I. Student Press Conference, click here. Parents of Black Children is an advocacy group that helped to promote the press conference. Visit their website [hyperlink] or their Facebook page.