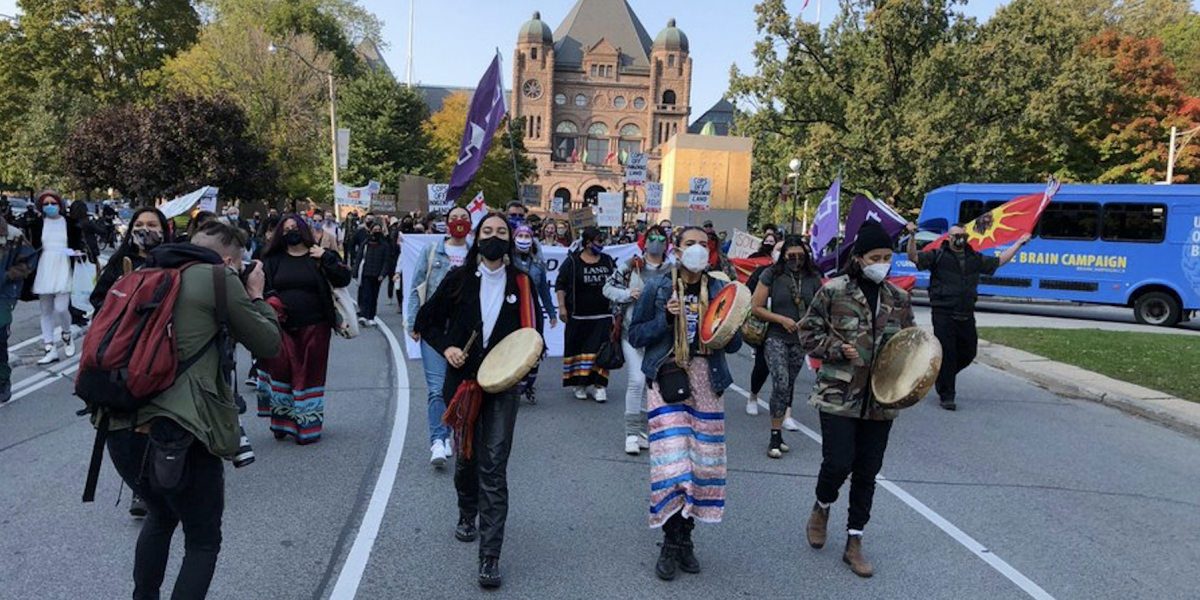 On October 9, about 200 people rallied and marched in Toronto to support the land defenders whose campaign is #1492landback. The event was part of a pan-Canadian day of action to support those who have been defending their Haudenosaunee territory since mid-July. The day coincided with the first provincial court case for those who opposed the injunction brought forward by Foxgate Developments for its McKenzie Meadows subdivision in Caledonia, just west of Toronto and by the Six Nations community.

Following the opening rally at Queen’s Park, activists marched down Toronto’s busy University Avenue to the provincial court house. We took over the intersection of Dundas Street West and University for several minutes, where Indigenous women drummed and sang surrounded by a circle of people dancing and others providing a buffer zone.The rally resumed on University Avenue adjacent to the courthouse. There were great speakers and music performed by Six Nations member Lacey Hill.

The opening prayer was given by Elder Wanda Whitebird who is of Mi’kmaq ancestry. She urged rally goers to be prepared to go to Land Back Lane when the land defenders ask us.  She made links with other Indigenous rights campaigns including the recent tragedy of Joyce Echaquan in Quebec who died in hospital and recorded the racist remarks of the staff there. Wanda reported that the woman’s daughter had to go into the very same hospital the next week to give birth because there are no midwives in that region. She also paid tribute to past defenders like Dudley George, killed by the Ontario Provincial Police in 1995.

“We are here today because land defenders are in court. They have a long history of protecting their territory including in 2006, when they successfully ended another development plan. The court case is because of police arrests for breaking their (state) injunction. The injunction has been extended to October 22. Solidarity actions are happening across the country. Their (defenders’) statement says ‘We have the responsibility to protect our land, a responsibility that cannot be taken away by anyone. We have stopped the development for eighty-three days at 1492 Land Back Lane. In spite of police intimidation people are still visiting us and bringing supplies to support us.”

Six Nations land defender Colin Martin, who lives on the Six Nations community and is part of the External Relations Committee of the Haudenosaunee Confederacy Chiefs Council said:

“We are here today across the country to oppose the criminalization of us protecting our lands. It should not be a crime in this country to stand up with our people for our independence, to protect our lands. Land is the basis for our independence, therefore we need to free the land and how we free this land is to repossess it. And to repossess it we need to occupy it. There will always be demonstrations to support our movement until the land matter is resolved. Injunctions that throw people in jail are not the solution to our problem. They stole our land and are still benefiting from it financially today. But they can never take away our resistance. We are defending our lands for our children and grandchildren and next generations. The band councils elected under the Indian Act are not needed. We have our own Council that gives us democracy today. I have six words for the government of Canada: ‘Give us our fucking land back.’”

Speaker Lela George, member of the Oneida nation of the Haudenosaunee, was the 23rd person among the 33 arrested defenders. She said “I am not Canadian. I follow the original laws of this land. We must work together in peace and solidarity as we did today and expose the false promises of the elected leaders. The answer is simple: keep your promises and honour the treaties.”

Speaker Terri Monture, from No More Silence, is also from Six Nations and has been living in T’karanto. Her father used to drive her and her siblings around through the whole Haudenosaunee territory and find out what parts had been stolen and why it was taken. Monture said:

“We understand the need to defend this…because it is our past and our future, our present day and everything we are. Ontario has no jurisdiction over our land and has no right to use the OPP. The provincial court has no jurisdiction over us. This problem can only stop with nation-to-nation discussions with the federal government, otherwise it probably will happen again and again and again. So your (Foxgate) sorry workmanship and unfair labor practice will no longer be happening on our land.”

Desmond Cole from No Pride in Policing also spoke, telling the crowd:

“These injunctions are a catch and release tool. The government is not afraid of taking people to court for occupying land. The government just wants to move them out of the way so they can develop that land. And that’s why the resistance I saw on Land Back Lane has to continue. This (‘Queen’s Park’) is the same site where the statue of John A. MacDonald was painted. The authorities don’t care about the statue but they are afraid of the solidarity among Indigenous people and Black people across this country. But we won’t let them intimidate us. We need to make sure that those being penalized do not feel alone. We have to get to the point where they need to arrest every single one of us. Our resistance is not going to stop until they do. As Black people our ability to be free is tied to the ability of First Nations, Métis and Inuit people to be free.”

“My trip to 1492 Land Back Lane changed my whole life. It showed us the goals that we’re all working towards. Our project supports people inside institutions. We’ve been fighting for abolition and at 1492 Land Back Lane we saw what abolition looks like. We know what the settler state does when they take land. They build prisons, courts and police. The land defenders keep all of us alive. We have a choice whether to support this vile state called Canada. When we say ‘defund police’ we’re not talking about a city council vote to reduce the budget by 10%. We mean we personally divest all of our interest, all of our money and time and energy and put them to the communities that are taking care of us.”

Workers of the world

Janice Folk-Dawson, executive vice-president of the Ontario Federation of Labour read a statement from the OFL’s First Nations, Metis and Inuit Circle, a group that meets quarterly to discuss and explore support for ongoing campaigns for Indigenous peoples. It noted how corporate actions lead to environmental degradation, the murder and disappearance of Indigenous women and  girls. This needs to be countered with ongoing investment in housing, clean water, and other infrastructure. As she said, the OFL “supports people defending their ancestral lands and resources, which is their right as sovereign indigenous people.”

Sharmeen Khan, with No One Is Illegal, made the important links between the struggles of Indigenous peoples and migrants. She said,

“Often migrant rights and Indigenous rights are pitted against each other. And that’s deliberate. But it’s the same system that criminalizes both. And that benefits the colonial structure. It benefits them when there’s a lack of solidarity between both groups. Capitalism provides the structures that allow the theft of land and exploitation of migrant workers. When have we ever benefited from the profits of land developers? Land defenders are telling us we can have a different world from this. We can have a society based on reciprocity to the land and have great relationships with each other. The land defenders are going against the private developers who make all our lives hell. They make housing that is unaffordable and drive people from their communities.”

The last Speaker was Sue Lynn who, in February, joined others in the Tyendinaga Mohawk Territory to show solidarity with the Wet’suwet’en land defenders. She said “tomorrow is the one-hundredth day of our Wiigwaasikaa camp in the east end of Toronto at 305 Dawes Road. We stand in solidarity with land defenders everywhere.” She described the other camps across Turtle Island including one in Ignace in northwestern Ontario where the women are trying to stop the deposit of nuclear waste. She encouraged us all to visit these camps.

Rally organizers then told us about a phone zap to take place Tuesday October 13. It will be to Foxgate Developments, the corporation that pushed the injunction and wants to build the subdivision on Haudenosaunee territory. Call them on Tuesday morning at 1-905-511-700 and let them know they have no right to build on Haudenosaunee territory and to back down on their injunction and to respect Indigenous rights.