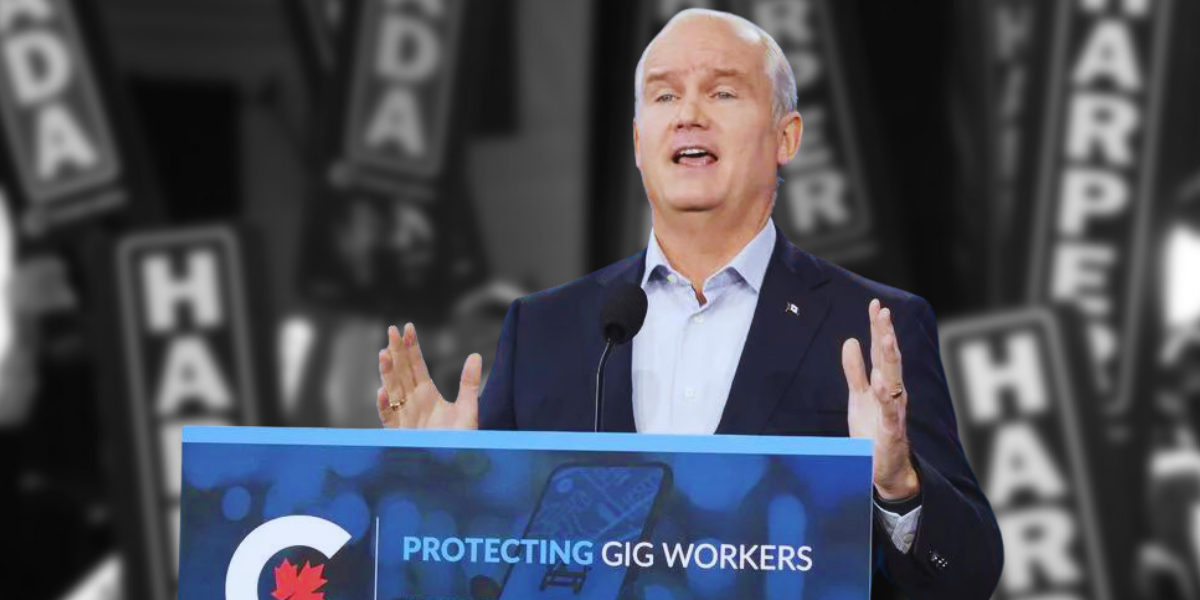 From ads trumpeting worker representation on corporate boards to headline-grabbing announcements about gig workers, Erin O’Toole has spent much of the early election period painting himself as a friend to workers. O’Toole is keen to present the Conservatives as a principled alternative to Trudea’s Liberals, while at the same time softening the edges of the Conservative Party’s reactionary image.

This recalibration of Conservative strategy, leading with pro-worker rhetoric and campaign promises of more spending, has thus far benefitted O’Toole during the election. It also presents a real danger for the left and labour that we can ill-afford to take lightly.

O’Toole was elected leader of the Conservative Party in the Summer of 2020, beating Peter McKay by winning over social conservatives and presenting himself as true blue Tory. O’Toole was first elected as an MP in 2012, winning a by-election in Durham after Conservative MP Bev Oda resigned in disgrace. During his time as a  parliamentary secretary to the minister of international, the Conservatives negotiated and signed a number of job-killing free trade agreements. He was then promoted to a cabinet position in the Harper government, as Minister of Veteran affairs, where he implemented cuts to veteran services at the same time he promised a gentler approach than the previous minister.

O’Toole, whose father was a manager at GM Oshawa and a notorious rightwing Tory MPP in Ontario, has tried to reinvent his image in the post-Harper era of the Conservative Party. He has played up his working class roots in Oshawa, despite coming from a management side family.

After winning leadership by securing support of social conservatives, O’Toole — much like Patrick Brown in Ontario — quickly changed his tune by promising to be a “compassionate, intelligent ‘government in waiting” that united under the mantra “through adversity, to the stars.”

O’Toole kicked off the election with the slogan “Secure the future,” releasing the party’s platform — titled “Canada’ Recovery Plan” — on day two of the campaign. O’Toole’s campaign has thus far been a mixture of traditional Conservative rhetoric about tax breaks and Liberal corruption mixed with more populist positions like advocating for workers on corporate boards.

O’Toole’s campaign promises are designed to capture media attention and sound pro-worker but on the granular policy level most of them will further entrench inequalities and inequities.

His much-touted gig worker plan would simply entrench misclassification and leave gig workers further behind. Conservatives are proposing creating a separate “Employee Savings Account” rather than force Uber and other platform employers to pay regular EI and CPP payments (which they avoid doing due to misclassification). The proposed ESA tier would mean gig workers would not be able to get the maximum EI benefit of $595 a week, but instead get $100 a month.

On top of that, this an attack on public pensions, as they would force gig workers outside the CPP and into the hands of riskier private pension plans. This plan is in perfect lock step with the wishes of Uber, which is moving heaven and Earth to push through their “flex plus” policies at the provincial level, which would cut gig workers out of basic employment standards. As it turns out, O’Toole’s plan is a carbon copy of Uber’s proposals. And this is no accident: O’Toole’s new director of policy was a corporate lobbyist for Uber.

Even if they did, having a seat on a board without a union will do little to ameliorate power imbalances in the workplace. This corporatist-lite model could be used as a way to keep unions out of the workplace by offering a token of worker representation. The entire proposal is scant on details and its lack of a basic enforcement mechanism means it is unlikely ever to be enacted.

O’Toole’s “recovery plan” also promises to make it easier to join a union to “level the playing field between unions and multinationals,” although no specific proposals are put on the table. There are two areas where O’Toole’s proposals would actually benefit workers, their proposal to introduce legislation “to ensure that pensioners have priority over corporate elites in bankruptcy or restructuring” and “preventing executives from paying themselves bonuses while managing a company going through restructuring if the pension plan is not fully funded.”

The other is extending the EI sickness benefit to 52 weeks from its current 15 weeks (to be extended to 26 weeks in 2022). This proposed extension exceeds the 50 weeks that both the NDP and Canadian Labour Congress are calling for.

Part of O’Toole’s pitch to workers leans heavily on nationalism. O’Toole has vowed to institute “buy Canadian” rules when it comes to procurement for government funded projects. This might be bluster in the face of already existing trade deals which prevent this, but it is designed to appeal to workers along a nationalistic basis. Thus, the Conservative platform and rhetoric is quick to stoke xenophobic fears about China stealing jobs.

The Conservatives nationalistic pitch to workers goes hand in glove with their regressive approach to migrants. They want to expand border security, expand the Safe Third Country Agreement, scrap the government assisted refugee program and increase the power bosses have over migrant workers. Unfortunately, the section of the union movement that has pushed “buy Canadian” and “Canadian jobs for Canadian workers” rhetoric has helped paved the wave for O’Toole to put country before class in his appeal to workers.

O’Toole is a real threat. There is little doubt that if the Conservatives were to win the election it would drag the whole political debate to the right. O’Toole’s reactionary nationalism, racism, support for increased law enforcement powers and settler-colonial views would become more prominent in government.

Rather than discussing expanding public services, improving workers’ rights and fighting climate change, the entire left would be forced into defending what we have already won through struggle. O’Toole’s victory would open up the door to more privatization of healthcare and it would deal a major blow to the promise of a much needed national childcare program. It would also be a setback for the fight to strengthen labour standards and the introduction of 10 permanent federal paid sick days, as well as a $15 minimum wage — campaigns that have scored major wins in the last few months.

The Liberals inability to deliver on the promise of sweeping change since coming to power in 2015 and their close ties to big business have made it hard for them to counter O’Toole’s appeal. It is vital that the left support campaigns and movements that are laying the groundwork for real alternatives and improvements for the working class. We need to hammer home that workers and public services saw us through the crisis, not the billionaires. The NDP — when they campaign on the class divide by pledging higher  taxes for the rich and expanding public services — are able to not just point out the faults of the Liberals. They can also counter O’Toole’s dangerous appeal to workers.

Thus far the election has seen O’Toole advance in the polls and it is now a real possibility the Conservatives could win the election. The left and labour shouldn’t undersell the threat of O’Toole’s “pro-worker” appeal. To fight O’Toole and the corporate agenda we need more than the status quo, we need campaigns and movements fighting for bold alternatives that are rooted in and speak to the working class.