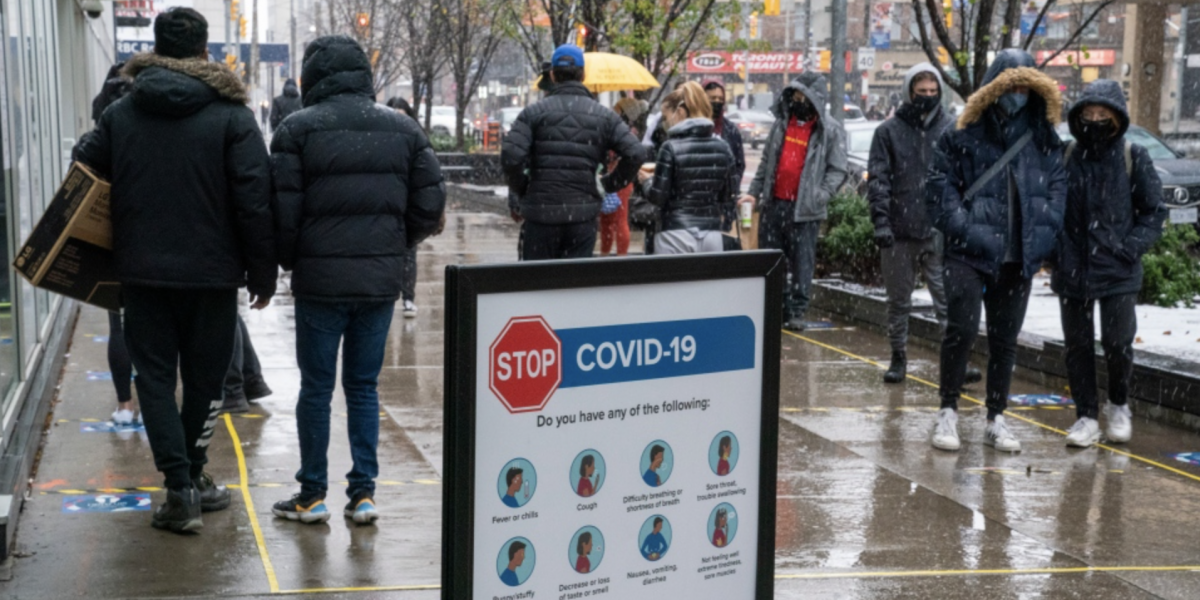 The Omicron variant is driving COVID-19 cases to record highs this year. On Thursday, Ontario saw its daily case numbers rise to 2,400, the highest number in seven months. Sometime in the next week or two, Ontario is expected to see its daily case count exceed previous records. We are in the middle of the fourth wave of the pandemic and it was predictable and avoidable.

Omicron was first identified thanks to South African scientists on November 24. It was almost immediately declared a variant of concern because of its numerous concerning mutations. Now, the rise of cases due to the Omicron is happening all over the world at record speeds. What we know is that Omicron is highly transmissible, even more than the Delta variant, early signs point to it being less severe on an individual level (still too early to know for sure) , but possibly more dangerous on a collective level. In countries with early outbreaks of Omicron like the UK, South Africa and Denmark, it has rapidly spread and become the dominant strain of the virus.

The origins of Omicron are still unknown, but the working hypothesis is that its plethora of mutations arose during a prolonged incubation in an immunocompromised person, much like the origin of the Alpha variant.

The more people who don’t have access to vaccines, the more likely we are to see the rise of variants of concern. If the pandemic has taught us one thing, it’s that robust public health is a global concern. Vaccine access across the planet is key if we are ever going to get this pandemic under control. But global vaccine production and distribution have been guided by corporate profits rather than human health.

The initial development of COVID-19 vaccines was financed by  public funds. But governments in the global North have prioritized the “intellectual property” of Big Pharma, blocking countries of the global South from local production. The billions in profits banked by Pfizer, Johnson and Johnson have trumped the needs of much of the global population, despite what those corporations say about helping poorer nations.

A recent People’s Vaccine Alliance report found that Moderna has only delivered 0.2 percent of their total vaccine supply to low-income countries and Pfizer/BioNTech has delivered less than 1 percent. This irrational approach to public health has increased the likelihood that new, more spreadable variants would arise. But in response, governments of the global North have imposed racist travel bans which punish South African scientists for identifying a new variant, rather than providing the vaccines that would stop variants from emerging.

Even in the global North, there has been no sensible plan to roll out the booster shot. It was clear early on that we were all going to need booster shots as soon as possible. But provincial governments and the federal government were slow to react. The way  booster shots are being rolled out across the country is haphazard and confusing. In Ontario, you can book a vaccine at a clinic or a local pharmacy, but rather than one clear centralized booking system we have a confusing patchwork.

Employers at no stage of this pandemic were held accountable for their actions in putting workers’ lives and health at risk. Time and again we saw that preventable workplace outbreaks at warehouses, factories and LTCs were driving the pandemic. Governments at all levels consistently put the interests of businesses ahead of workers and the public. This is why even now governments are reluctant to bring in public health measures like limiting capacity levels at restaurants, bars and big public events.

Governments and the business lobby have pushed for a reopening of the economy and a return to “normal.” It is unconscionable that the federal government ended CRB before the pandemic was over. A strong public health response involves giving people the supports they need to make good public health choices. We need to permanently strengthen EI, bring back CRB and raise the minimum wage.

Elected officials and many in the media would rather emphasize “personal responsibility” than talk about private sector culpability for the pandemic. But schools were never made adequately safe for students or workers. Proper ventilation has too frequently been missing. Employers in general were totally let off the hook for health and safety by vaccine mandates, giving them a free pass on social distancing, paid sick days, ventilation, rapid tests, and PPE. Vaccines were supposed to be the magic bullets to end the pandemic. But now, despite high vaccine uptake, we are entering another wave, based on the same factors of precarious work that have always fueled the pandemic.

After many months of inaction the rollout of rapid tests in Ontario has been shambolic. The massive lines for rapid tests at a couple of malls really drives home the failure of leadership seen in Ontario, where Ford would rather boost the profits of Shoppers Drug Mart than make rapid tests freely available. But even if workers do use the rapid antigen tests to identify asymptotic infections, what are they supposed to do with this information? Even workers sick with COVID-19 went to work when they couldn’t afford a day off work. Now even more is being asked of asymptomatic workers, who must pay for rapid tests and if positive get a confirmatory test and keep isolating without pay. Like vaccination or the advice to stay home sick, rapid antigen tests offer empty hope without paid sick days.

Workers need at least 10 permanent paid sick days plus two weeks during public health emergencies. But governments have refused or been slow to legislate, and the rapid spread of Omicron will only be made worse due to the lack of access to paid sick days. As the variant spreads rapidly, thousands of workers are likely to fall sick. Disproportionately these workers are low-waged and racialized, workers who already have borne the brunt of the pandemic. The lack of paid sick days legislation in most provinces is a complete and utter failure by our governments. It is good the federal government is bringing in 10 paid sick days for federally regulated workers, although they are creating unnecessary barriers like doctor notes or the accrual process where workers slowly gain access to paid sick days rather than immediate access to 10. The BC government legislated 5 paid sick days starting in January, but all provinces need 10 permanent and two weeks during pandemics.

A government and business failure

A lot of big talk from politicians about being concerned with public health, coupled with inadequate policies and disorganized action, has left people feeling exhausted by the pandemic. Politicians and the media are quick to blame individuals for the spread of the virus. But what is happening now in this fourth wave of the pandemic is not because of everyday people. The rapid spread of the Omicron variant was predictable and preventable, and the fact that it is happening rests squarely on the business lobby and our governments and media, which have put profits before people.

But there is a way out of endless waves and endless variants: amplify movements for vaccine equity, income supports for workers, and workplace protections including paid sick days.