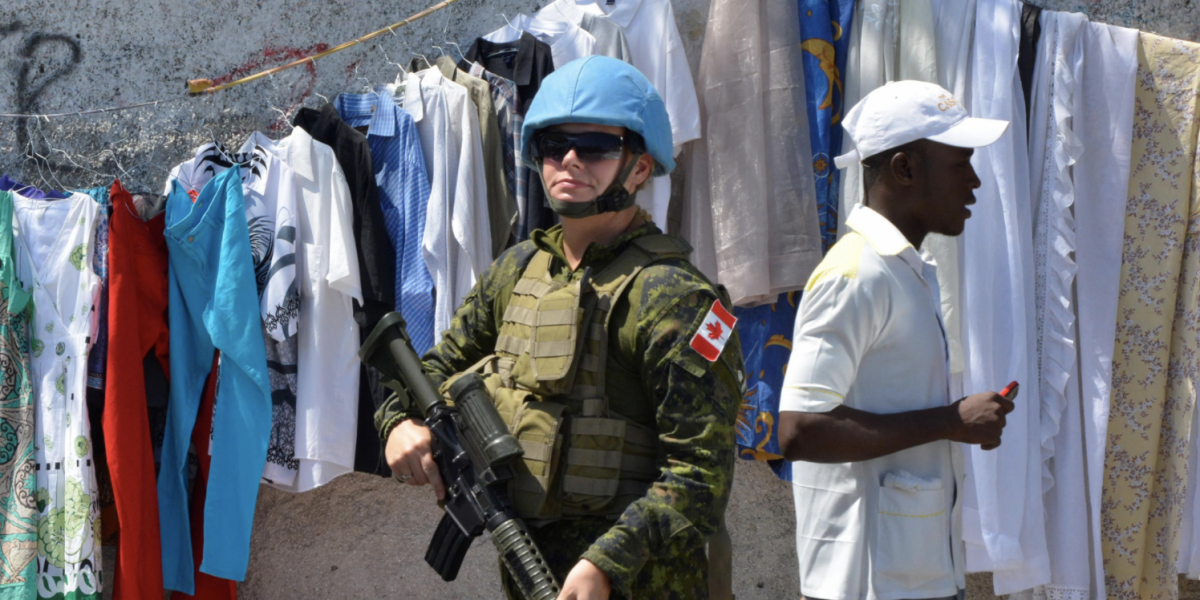 Thirteen months after the “Ottawa Initiative on Haiti” meeting, President Jean-Bertrand Aristide and most other elected officials were pushed out and a quasi-UN trusteeship had begun. Former soldiers were immediately integrated into the Haitian National Police and the armed forces were subsequently re-created. The 2003 Ottawa Initiative meeting is considered the informal beginning of the Core Group of foreign ambassadors that dominate Haiti and recently appointed the country’s leader through a tweet.

Present at the January 31–February 1, 2003, Ottawa Initiative discussion were Canadian health (and later foreign) minister Pierre Pettigrew, US assistant secretary of state for the western hemisphere Otto Reich, another State Department official, Mary Ellen Gilroy, assistant secretary general of the Organization of American States and US diplomat, Luigi Einaudi, El Salvador’s foreign minister, Maria de Avila and France’s minister of security and conflict prevention Pierre-André Wiltzer. They were all invited to the government’s Meech Lake conference centre in Gatineau, Québec by secretary of state for Latin America and minister for La Francophonie Dennis Paradis. No Haitian officials were invited to the assembly that played an important role in consolidating the international forces – particularly the US, France and Canada – that would carry out the February 29, 2004, coup.

Three weeks before the coup, on February 5, 2004, the self-styled “intellectual author” of the armed rebellion against Aristide, Paul Arcelin, met Liberal minister Pierre Pettigrew; 30 JTF2 special forces secured the Port-au-Prince airport the night Aristide said he was “kidnapped” by US Marines; 500 Canadian troops were part of the mission to consolidate the coup; Ottawa cut off aid to Haiti’s elected government and then funneled tens of millions of dollars to the installed government; Paul Martin made the first ever trip by a Canadian prime minister to Haiti to support the post-coup dictatorship. In short, Ottawa played an important role in overthrowing the elected government and supporting the foreign installed regime responsible for thousands of deaths.

Prominent journalist Michel Vastel brought the gathering to public attention in the March 15, 2003, issue of l’Actualité, Quebec’s leading corporate news magazine. In an article titled “Haiti put under U.N. Tutelage?”, Vastel wrote that the possibility of Aristide’s departure, a potential trusteeship and the return of Haiti’s military were discussed by Paradis and Wiltzer during a joint panel.

After the coup Vastel said his source on this private conference was his friend Denis Paradis, and information on the meeting was corroborated by French officials. For his part, Paradis would deny Vastel’s account of the Ottawa Initiative on Haiti, but the story was never retracted by Vastel or l’Actualité. In several post-coup interviews Vastel stood behind his original article and asserted that several follow-up meetings took place involving the same participants, as well as US Secretary of State Colin Powell.

The leak to Vastel was likely a trial balloon designed to gauge the response of the opposition parties, the Haitian community and other social organizations. Documents received through an Access to Information request demonstrate that Foreign Affairs monitored public reaction to Vastel’s story. In an e-mail exchange with Foreign Affairs, Canada’s Ambassador to Haiti Kenneth Cook pointed out that of the 70 letters received by l’Actualité on the topic of regime change, “most were positive.”

While claiming he was misinterpreted by Vastel, Paradis made it clear that a foreign intervention into Haiti was discussed. In a September 2004 interview with Haiti Solidarity activist Anthony Fenton, Paradis explained that “there was one thematic that went under the whole meeting [Ottawa Initiative]… the responsibility to protect.” A showpiece of the Liberal Party’s foreign policy, the “responsibility to protect” doctrine asserts that where gross human rights abuses are occurring, it is the duty of the international community to intervene, over and above considerations of state sovereignty.

In a striking example of subservience to power, the dominant media basically refused to investigate the Ottawa Initiative and has barely mentioned the meeting. A Canadian Newsstand search more than a decade after the 2004 coup found not one single English-language report about the meeting (except for mentions of it by me and two other Haiti solidarity activists in opinion pieces). The dominant media largely ignored the Ottawa Initiative meeting even though information about it was easily accessible online and solidarity activists across the country referenced it repeatedly. Subsequently, Canadian policy followed the lines of what was purportedly discussed.

The US/Canada/France coup led to a 10,000 strong UN mission, which occupied the country for 13 years (a much smaller UN mission remains). Six weeks after the coup the Core Group (US, Canada, France, Brazil, Spain, Germany, EU, UN and OAS representatives) was formally launched. It has significantly shaped Haitian affairs since. The Core Group periodically releases collective statements on Haitian politics and meets among themselves and with Haitian officials.

In the nakedly imperialistic alliance’s most flagrantly colonial measure, the Core Group effectively appointed the country’s current leader after President Moise was killed in July. In rare critical coverage, CBC recently published a damning article on Canada’s role in the Core Group that quoted a member of the Commission to Search for a Haitian Solution to the Crisis, Monique Clesca, who complained that foreign ambassadors selected the leader of the country through a Tweet! A July 17 Core Group statement “strongly encouraged” Ariel Henry “to form a government,” which prompted de facto prime minister Claude Joseph to immediately drop his claim to be PM. “A tweet put Ariel Henry in power,” Clesca told the CBC. How would Canadians feel about the Jamaican, Vietnamese, Pakistani and Zimbabwean ambassadors releasing a collective statement on who should be Prime Minister of Canada?

Seventeen years after the Ottawa Initiative meeting a major media outlet finally investigated the get together. As part of covering the 10th anniversary of the terrible 2010 earthquake, Radio-Canada’s flagship news program “Enquête” interviewed Denis Paradis, the Liberal minister responsible for organizing the meeting, who admitted no Haitian officials were invited to discuss their own country’s future during the get together in 2003. Paradis said the Ottawa Initiative on Haiti meeting didn’t discuss “putting Haiti under tutelage” but rather the “question of is the principle of sovereignty unassailable?” Enquête also interviewed Solidarité Québec-Haïti member Jean Saint-Vil who offered a critical perspective about the discussion to oust Aristide. Additionally, the program linked the Ottawa Initiative meeting to the Core Group, which was framed as the power behind unpopular President Jovenel Moise.

All those across Canada should support such an investigation, and challenge ongoing Canadian imperialism in Haiti. Rather than investing billions in new fighter jets, the Canadian government owes Haitians an apology and reparations.