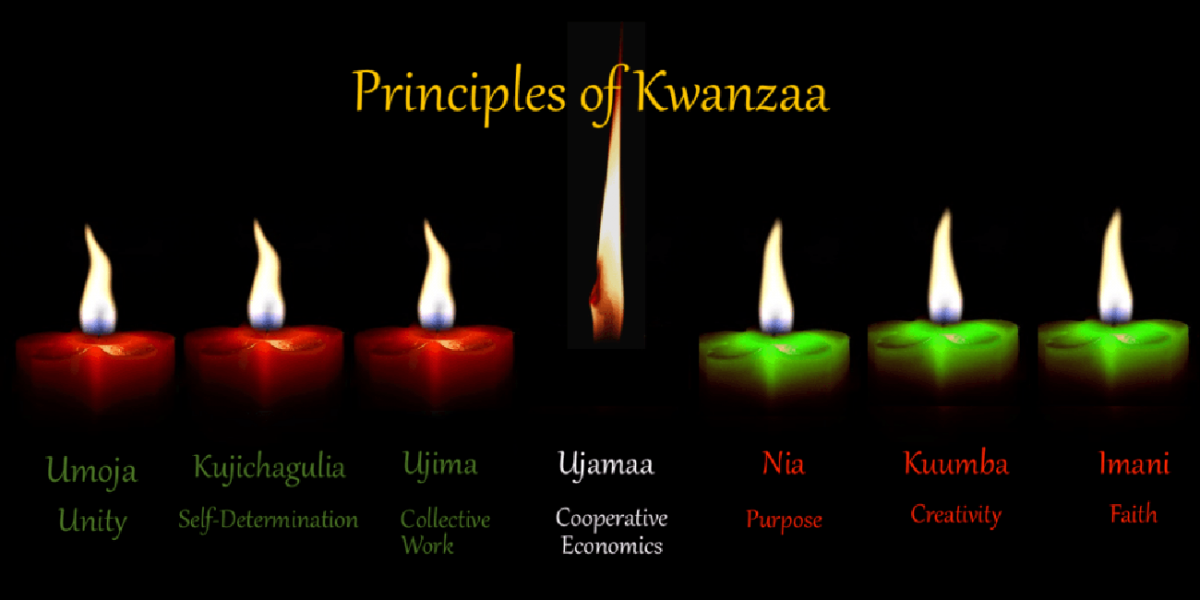 Kwanzaa has come a long way since it was created during the Black Power movement of the 1960s. The holiday rapidly increased to become mainstream, and is now observed by millions of Black folks around the world between December 26 and January 1. People of African descent interested in honouring our heritage have embraced Kwanzaa. Millions adopted Kwanzaa celebrations because it highlighted a deep truth that the myth of white Santa was too ludicrous to continue to entertain in our communities. In its modern day form it is not actually meant to replace Christmas, although it is intentionally meant to be African-centered.

People of African descent recognized that we are afforded very little if any opportunities for pride in our own cultural heritage. Particularly due to the negative light that any history of Africa was presented in North American schools, literature, and the media — Black History Month would not be established until years later. Kwanzaa was initiated in 1966 in the context of the Black Power movement. Emerging the same year as the slogan “Black Power”, it reflected the movement’s drive for self-determination and cultural expression.

Maulana (Ron) Karenga was head of a group called the ‘Us Organization’ (“us” referring to Black people, as opposed to “them” the oppressors). He felt strongly that people of African descent should have our own version of a holiday and should not have to perpetually participate in traditions that uplifted the dominant white society but ignored and erased African/Black culture. As he explained, the goal was to “give Blacks an alternative to the existing holiday and give Blacks an opportunity to celebrate themselves and their history, rather than simply imitate the practice of the dominant society.” Later as a university professor, Dr. Karenga re-stated that Kwanzaa is a cultural celebration, but not a replacement for Christmas—so as to not alienate the millions of Black American Christians who celebrate Christmas. Both Christmas and Kwanzaa are currently celebrated by many.

Kwanzaa reflected the pan-Africanism of the movement, including its terminology and its principles. “Kwanzaa” is a Swahili word meaning “first fruits”, as many African countries did have a history of seasonal first fruits celebrations in timing with harvesting of crops. Indigenous populations across the world have certainly celebrated this. What’s intriguing is that Kwanzaa is not only an agricultural and cultural event; practicing it authentically also requires self-reflection in the establishment of character towards building an equitable community.

During the seven days of Kwanzaa, each celebrant is meant to do serious reflection on important ways of existing, both personally and collectively. Practicing each of the seven guiding principles of what it means to be human, African, and part of a community is at its core. For each night of Kwanzaa we light a green, black, or red candle to observe one of the ‘Seven Guiding Principles’ that respect our African heritage. Each candle stands for one of the following guiding principles:

This is clearly a commendable and very worthwhile family tradition to adopt. But still there are many Black people across North America and the world who do not yet regularly light Kwanzaa candles to ignite these principles.

The main reasons for Kwanzaa remaining the ‘underdog’ would be the deliberate promotion of colonialist European Christmas traditions of the ruling classes in America and around the world. This promotion is part and parcel of capitalism, which is captained by white supremacy and fueled by racism. Capitalism would never support unity, self-determination, or cooperative economics. Also, remember that Kwanzaa’s creation was firmly rooted in the Black Power movement, born out of America’s Civil Rights struggle.

The socialist principles of Karl Marx and the principles of Kwanzaa have a similar resonance, if not a singular vision for racial, social, and economic justice. Marx’s famous 11th thesis on Feuerbach stated, “The philosophers have only interpreted the world, in various ways; but the point is to change it.” Guiding principles are meant to be acted upon to do just that. Imagine if building on these connected guiding principles could lead to creating a new, united working-class consciousness. Imagine if promoting the values and practices of Kwanzaa could assist in strengthening the working-class to rise up against capitalism. Together these cultural and socialist principles can help the working-class to build on its multi-racial unity.

The Black Power movement of the 60’s and the Black Lives Matter movement of today are supported and strengthened by the socialist goals for a fair and just society. Socialists, including members of Spring, already understand that uniting the working-class will give us the strength we need to succeed in the struggle for revolution. We also understand that successful unification cannot really happen without actively opposing racism within our own working-class ranks. Sexism, racism and other forms of oppression exist in every society, and it is crucial for socialists to unite globally to dismantle these divisions.

Connecting the Black Lives Matter movement to the struggle of all oppressed workers everywhere is of great importance to the socialist revolution. To be clear, revolution is the means, but transforming society is the goal. A broad and unified working-class movement that can achieve international solidarity will have the ability to transform society, as envisioned by people of the world thirsting for social, racial, climate, and economic justice. A genuinely democratic, harmonious and equitable existence for Indigenous people and people of African descent equals a more peaceful and equitable society for all people. How can we spread this message globally? I would start by wishing every one of us here and around the world a resounding ‘Happy Kwanzaa!!’