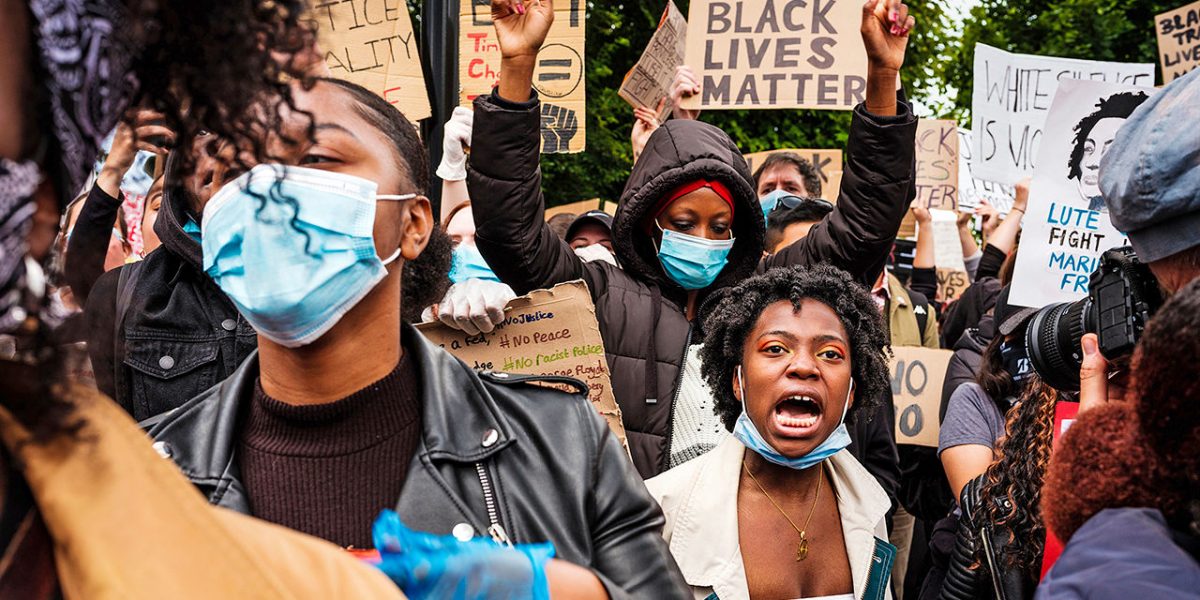 My heart celebrated when I read that the Minneapolis city council had committed to fully defunding their police and, more recently, the city of Hamilton had kicked officers out of their schools. Despite all the heckles and fears that this Black Power movement would not result in change, victories came that we hadn’t dared to think would happen in our lifetime. The vision of a community free of inhumane law enforcement has not only reverberated across Turtle Island, sparking more promises to slash police budgets, but also back into history.

In the 18th century, the goal of the abolition movement to end slavery was even more unthinkable, after four centuries of the cannibalistic institution. However, two actions of the campaign that galvanized the public were disseminating images of the ultimate carceral space, the inside belly of the slave ship, and horrific news of the Zong massacre in 1781, when the ship’s crew threw 130 Africans overboard to collect insurance. Those two flashpoints made the brutality as undeniable as the nine-minute killing of George Floyd did. Today, those who shout, march, and write are walking in the tradition of rebelling slaves like the Black Jacobins inspired by the French Revolution, former slaves turned abolitionists, the authors of slave narratives, British Parliamentarians, Quakers, and more.

That lineage of revolution is beautiful to contemplate. This current iteration of abolitionism is focused on analyzing the structures of power in white supremacist societies and how they intersect with capitalism—like the birth of modern policing, the school to prison pipeline, and the criminalization of the poor, homeless and mentally ill. There is also much being written about how the manufactured poverty and disenfranchisement has made the novel coronavirus more lethal. Yet I worry that the protests are not making enough connections between systemic racism and the very recent economic crimes being perpetrated under the guise of a pandemic response.

Pandemic of capitalism and racism

What has just happened is perhaps the greatest robbery in modern history: leaders have given gigantic bailouts to the oligarchic elite with our tax dollars while leaving crumbs for us to dine on. That hideous upward transfer of wealth will only serve to further entrench the gap between the rich and poor. That gap is already a yawning chasm that prevents most from leading a stable, healthy life, if they live at all. Poverty already kills, but if we take a moment to reflect on the recent neoliberal policies enacted, we will realize they will be as deadly and racist as that white knee on a Black neck.

In Canada, it is unknown how many people of colour have been infected with COVID-19 because the Liberal government hasn’t even bothered to collect data on race. But we can safely imagine the worst because other news stories paint a very clear picture that marginalized communities are being hit the hardest. To start with, migrant workers on farms and in meat plants, who are largely from the Global South, are working, sleeping, and dying with the virus. They feed us but in return for their necessary labor, Trudeau gives them no protections, no health care, and no permanent residency. The pandemic pay that Doug Ford promised frontline workers two months ago still has not been received by the largely female, racialized workforce in hospitals, long term care homes, and supermarkets. And of course, there is the abhorrent lack of personal protective equipment. Still more frightening is the wave of evictions to come across the country since there has been no rent or mortgage forgiveness. One would think billions of dollars is enough for the banks to weather the storm, but instead they’ve only approved mortgage deferrals. Infuriatingly, it appears they are doubling their income: cash from the bailout and debt-collecting from us.

The little money that CERB offers has largely been sucked up by landlords, especially in a city of sky-rocketing rents like Toronto. No doubt, racialized groups make up a significant portion of renters, and now many are fearing joining the ranks of the homeless, who are also marginalized peoples. Bill 184 makes it seem like the Premier is eager to toss Ontarians out of their homes once the moratorium on residential evictions is lifted. Even small business owners who could never have imagined coming so close to the poverty line are losing their leases. And in all likelihood, the banks and corporations with their newly flooded cash reserves will buy up the vacated real estate. It’s been said enough times that small businesses are crucial to job creation, and one only has to think about the staff at all the restaurants and retail companies, a large percentage which are also disadvantaged groups. A lot of workers in those industries are also youth. How terrified students and recent graduates must be, crushed with student loans and hit with a second recession before they can even launch their careers.

I was stunned when I discovered that CERB is taxable. The measly two thousand dollars, which the federal government isn’t even willing to give to every single human being living in Canada, will be partially clawed back next year. Not to mention last year’s taxes that still have to be paid by September 1st this year. By the way, these tax deferrals were counted in the financial aid package, but getting new funds, not keeping money you already have, is aid. All this means that many will survive the virus only to be devastated by the financial ruin that all this short-sighted inhumanity is ensuring. And when millions are languishing in debt, the government will then ask for some of the “benefit” back. This makes Trudeau’s legislation to go after fraudsters a sadistic joke.

The coronavirus is a crisis, but the economic fallout in the making is a preventable catastrophe. A large share of the money given to banks and big businesses should have gone to the 99% who would spend it, an obvious solution for restarting the economy. We cannot let the skilled performances of politicians across the spectrum trick us. I see little difference between the Liberal Prime Minister and the Conservative Premier of Ontario. I was completely unmoved by Doug Ford’s crocodile tears after the report on long-term care homes came out, just as I scoffed at Trudeau’s vague promise to do better for migrant workers. Their words cannot drown out their neglect; only progressive policies can. Trump is not the only leader who needs a death clock named after him.

We must consider the collective consequences of these terrifying policies and negligence now, when the air is so pregnant with the energy of revolution, because for the very same communities the Black Lives Matter protests are fighting, the impact will be multiplied. As a Black woman, I fear for the lives of Black and Brown people at the hand of the police; I also fear the slow strangulation by the hands orchestrating future long-term unemployment, insurmountable debt, bankruptcy, food insecurity, and explosive homelessness. Like many others, when I watched and read about the killings of Floyd and Regis, rage was steaming in my blood; I was also livid when I learned that government is choosing to borrow money for its pandemic spending from private banks rather than the Bank of Canada that could provide interest-free loans! Austerity cuts to public services are typically justified by the need to “balance the budget”. Yet there would not be such a deficit built up over the decades if the both Conservative and Liberal were not invested in making private lenders wealthy, and cutting corporate taxes.

Defund the police and dream big

We need a renewal of the Occupy movement with a clear set of demands. If, as Angela Davis says, racism and capitalism are inseparable, that means simultaneously resisting the cannibals not only in the form of cops but also the rich and the politicians they’ve bought. We need to unite numerous campaigns: status for all, abolish the police and invest in communities, abolish prisons and invest in transformative justice, forgive rent/mortgages and make CERB accessible to all, provide free transit and a Green New Deal, paid sick days for all, and free healthcare and education.

Of course, conservatives will ask their well worn-out question that has become a knee-jerk reflex at the sound of money being spent on the majority rather than the minority: how will you pay for that? However, this objection is rendered moot by the sudden emergence of billions of dollars for capitalist corporations during recessions. All can be paid for by a wealth tax proportional to the decades of astronomical pillaging over the decades. Time to tap into the tax shelters that the seemingly forgotten Panama and Paradise Papers scandalously exposed. Certainly, the Loblaws family should give back a significant chunk of the profits they’re raking in.

Just as we cannot fall for the empty symbolism of cops kneeling, we can also not afford to miss the opportunity for a true and permanent redistribution of wealth. If the BLM protests were to expand into a more radically anti-capitalist movement, they would undoubtedly bring onboard new allies from the multi-racial working class. The work of Fred Hampton and Martin Luther King, both murdered in part because of their attempt to reach across the colour line and build solidarity among the working class, proves this. I recognize that indeed there are many advocates and organizations that have been pushing for these demands for decades, certainly longer than I have. But what I admired about Occupy was how it brought millions together under the same umbrella of class consciousness. Oh, if we could marshal all our fighting forces and unite them into one laser beam targeted at the morally bankrupt cabal of the super rich, the architect of all these miseries, what a revolution we would have.