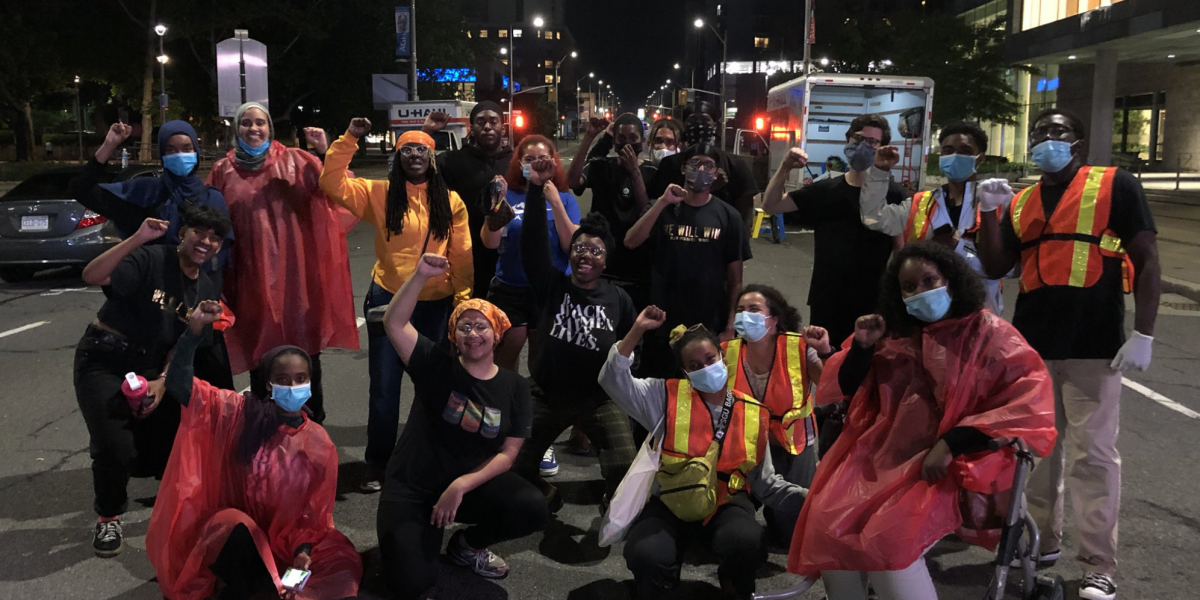 A movement led by Black and racialized students forced the Hamilton Wentworth District School Board to remove police from schools.

Around 5pm on Monday, hundreds of students and supporters occupied Main Street in front of Hamilton City Hall. Six hours later, demonstrators cheered and danced when trustees voted to cancel the relationship between the school board and Hamilton police.

Gachi, a student and community activist, stood on the back of a moving van and addressed the jubilant crowd: “Guys… We just won! Through tireless community advocacy and efforts, we have successfully pushed for the complete termination of the police liaison program!”

Students have fought for years to end a program that embeds police violence and racism at the heart of their schools. The group HWDSB Kids Need Help led the campaign to end the Special Resources Officer (SRO) program because “police officers in schools intimidate and harass Black, racialized, poor, immigrant, queer, trans, disabled, poor and immigrant students.”

Research by the group collected experiences of Hamilton-Wentworth District School Board (HWDSB) students and staff. In the words of one student, “the SRO program is unsafe and racist. My Latinx and Black classmates and I would always be called to our lockers first when the cops would do ‘random’ searches of lockers. They were supported and accompanied by the vice principal. All students knew where they would start.”

While celebrating their victory in the streets Monday night, several former students said they’ve been “fighting for this for years.” Ruby told the crowd, “this termination should have happened sooner. Black and Indigenous students should not have had to suffer waiting for this vote.”

Masked and physically-distanced, through hours of the live-streamed trustee board debate, demonstrators on Main St. cheered speakers and poets, shared hand sanitizer and snacks, and booed amplified voices of trustees when they praised police.

Sabreina led an impromptu teach-in while power to the board meeting live-stream was restored. She paced slowly while telling seated demonstrators that “the school board doesn’t want to do this work. They’re doing it because we forced them to.”

Sabreina contrasted the mere hours it took the board to suspend the Black Mentorship Program when officials didn’t like its report on racism in February, with the board’s ongoing, years-long refusal to act on student demands to end the police liaison program.

Even last week, a majority of trustees continued to support the SRO program. They used procedural stall tactics in hopes of deflating the surge in student power amid the global rebellion against anti-Black racism and police violence.

“We don’t stop until racism stops!”

When dark clouds gathered in the sky at sunset, organizers handed out blue and yellow ponchos. Music filled the street while people danced and laughed in the rain. A voice cried out: “We don’t stop until racism stops!”

The storm passed as quickly as it had arrived. As clouds broke, demonstrators chanted: “I believe that we will win.”

A few hours later, they had.

Reflecting on the win, Layla drew links between the student campaign and anti-capitalist organizing. “Police-free schools are just one step toward a safer community,” Layla said. “The ultimate goal of this work is abolition. It is a world without prisons, which serve to separate people from their communities and create generational trauma. It is a world without policing, which acts as a tool of the state to surveil and criminalize Black and Indigenous peoples. It is a world without capitalism: a system that pits us against one another, and forces us to leave one another behind. It is reimagining from its roots a system that will care for every person in our society.”

“WE WON! TONIGHT CELEBRATE, WE REJOICE, WE CRY AND LAUGH! TOMORROW WE ORGANIZE, MOBILIZE, AND WIN.”

Activists in Hamilton have struck a major victory and given serious momentum to movements to defund, disarm, dismantle, and abolish police everywhere.