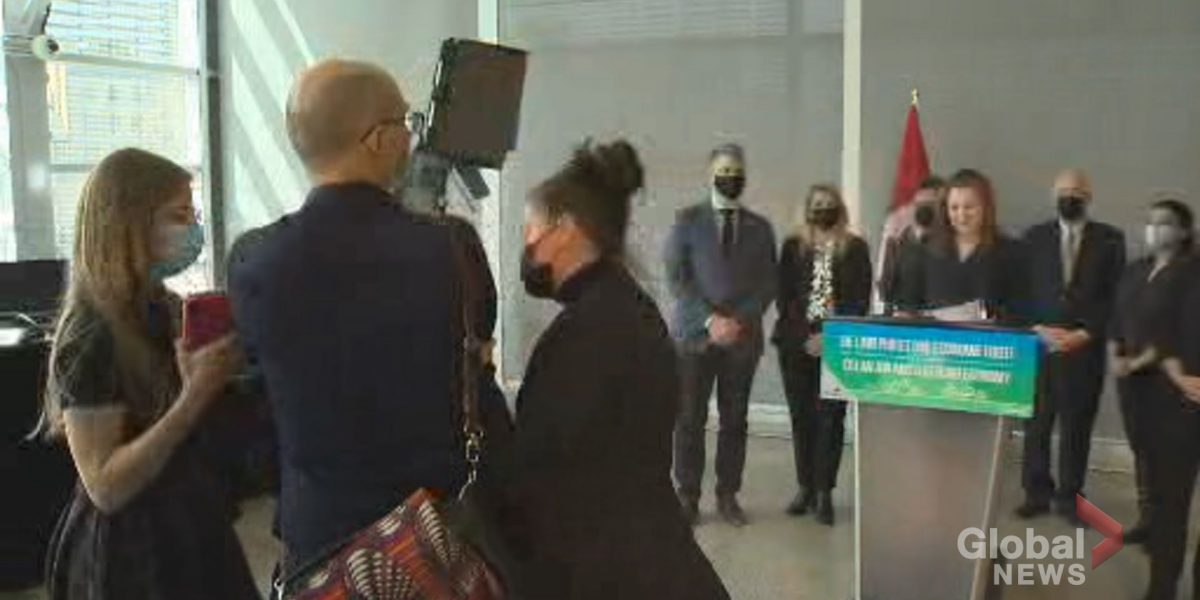 On Monday I interrupted Deputy Prime Minister Chrystia Freeland at a press conference to ask if she’s a warmonger. I criticized her for devoting half a billion dollars in last week’s budget for new weapons to fight Russia. I also questioned her support of NATO expansion and failure to support the Minsk accords for a negotiated solution to the monstrous war.

Taking advantage of the large platform granted the finance minister, Freeland called for escalation of the war during her recent budget speech. “The world’s democracies—including our own—can be safe only once the Russian tyrant and his armies are entirely vanquished”, she declared. While Russia’s invasion is illegal and is horrific, this is a call for nuclear war since “vanquishing” the Russian military would likely elicit a nuclear response.

Freeland put Canadians’ money where her mouth is. In an unprecedented move, the budget earmarked half a billion dollars in funding for arms to Ukraine (in addition to $90 million worth of “offensive” weapons announced and delivered since the end of February). The Liberals also added $8 billion over five years to a Canadian military budget already receiving significant annual increases. In 2016 military spending was $18.9 billion and by 2026 it is set to reach $40.7 billion (this doesn’t include $6 billion devoted annually to Veterans Affairs).

Long before Russia’s February 24 invasion, Freeland framed the smoldering fighting in eastern Ukraine as a global battle between good and evil. In November 2019 she declared that Ukraine was at the “forefront of the struggle between democracy and authoritarianism” and that “modern Ukraine is the country where the struggle is ongoing and the future of the rules-based international order and genuine democracy in the world will be determined.” But democracy has never been a genuine concern for the hardline nationalists in Freeland’s family. Her grandfather, Michael Chomiak, was a Ukrainian Nazi collaborator and propagandist during World War II.

It’s not only on Ukraine that Freeland is hawkish. During a visit to Israel in 2018 she announced that should Canada win a seat on the United Nations Security Council, it would act as an “asset for Israel” on the Council. In 2020 Venezuelan foreign affairs Minister Jorge Arreaza pointed out that the Trudeau government’s Venezuela policy took a sharply belligerent turn after Freeland replaced Stéphane Dion as foreign affairs minister in January 2017. Freeland helped establish the Lima Group and participated in a half dozen meetings of the anti-Venezuelan government coalition. As the Globe and Mail reported, “Freeland spoke with Juan Guaidó to congratulate him on unifying opposition forces in Venezuela, two weeks before he declared himself interim president” in January 2019.

When Freeland became foreign minister, the US embassy in Ottawa sent a memo to the State Department in Washington entitled “Canada Adopts ‘America First’ Foreign Policy.” Uncovered through a freedom of information request by Jay Watts, the largely redacted cable concluded that Trudeau promoted Freeland “in large part because of her strong U.S. contacts” and that her “number one priority” was working closely with Washington.

In launching a foreign policy review in June 2017, Freeland outlined Trudeau’s doctrine of imperial feminism: recalling Canada’s role in creating the neoliberal institutions from the IMF to the World Trade Organization; praising Canadian militarism from the Suez Canal to the Balkans, and from Afghanistan to Iraq; promising billions for militarism and border security, and support for NATO; and justifying this by sprinkling in references to feminism.

But Liberal militarism will never advance women’s equality, and never bring peace and justice. We need to get Canada out of NATO, and redirect military spending from warfare to welfare.