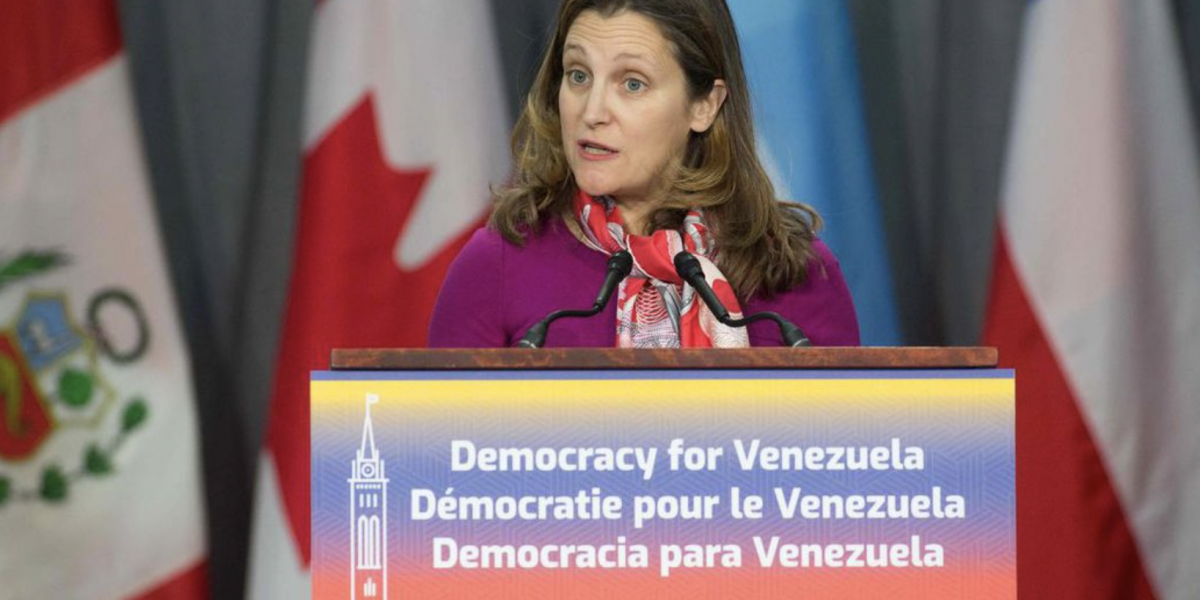 Three-years ago Juan Guaidó declared himself president of Venezuela in a Caracas park. The same day Canadian foreign minister Chrystia Freeland formally recognized the little-known opposition politician. In subsequent days Canadian diplomats boasted to reporters that they played an important role in uniting large swaths of the Venezuelan opposition behind the plan to ratchet up tensions by proclaiming the new head of the opposition-dominated National Assembly president. They also told the Globe and Mail and Associated Press that Canada played an important role in building international diplomatic support for claiming the relatively marginal politician was president.

Amidst the exuberance the Liberals quickly organized a meeting of the Lima Group of states opposed to the Venezuelan government. At the February 4, 2019, meeting in Ottawa Trudeau declared, “the international community must immediately unite behind the interim president.” The post Lima Group “Ottawa Declaration” called on Venezuela’s armed forces “to demonstrate their loyalty to the interim president” by removing the elected president.

During these heady days Canada’s Prime Minister called the leaders of France, Spain, Paraguay, Ireland, Italy and others to convince them to join Canada’s campaign against the Venezuelan government. When Japanese Prime Minister Shinzo Abe visited Ottawa in April 2019 Canada’s post meeting release noted, “during the visit, Prime Minister Abe announced Japan’s endorsement of the Ottawa Declaration on Venezuela.”

At the end of that month Guaidó, opposition politician Leopoldo Lopez and others sought to stoke a military uprising in Caracas. Hours into the early morning effort Freeland tweeted, “The safety and security of Juan Guaidó and Leopoldo López must be guaranteed. Venezuelans who peacefully support Interim President Guaidó must do so without fear of intimidation or violence.” She followed that up with a statement to the press noting, “Venezuelans are in the streets today demonstrating their desire for a return to democracy even in the face of a violent crackdown. Canada commends their courage and we call on the Maduro regime to step aside now.” Then Freeland put out a video calling on Venezuelans to rise up and requested an emergency video conference meeting of the Lima Group. Later on April 30 the coalition issued a statement labeling the attempted putsch an effort “to restore democracy” and demanded the military “cease being instruments of the illegitimate regime for the oppression of the Venezuelan people.”

While this failed insurrection marked the end of any realistic chance Guaidó had at becoming president, Trudeau openly supported him for months longer. In January 2020 Guaidó was fêted in Ottawa, meeting the Prime Minister, international development minister and foreign minister. A picture of Trudeau and Guaidó taking a selfie together was released by the Prime Minister’s Office and Trudeau declared, “I commend Interim President Guaidó for the courage and leadership he has shown in his efforts to return democracy to Venezuela, and I offer Canada’s continued support.”

Since then, Canadian support for Guaidó has become more muted. But they continue to recognize his representatives even though Guaidó’s term as a national assembly member ended and he has lost most of his domestic and international support. Even Lima left the Lima Group.

As we approach the three-year anniversary of Guaidó declaring himself president on January 23, it’s worth asking how long the Liberals will continue the charade. Another year? Five years? Or is the plan to just wait until Washington changes its position?