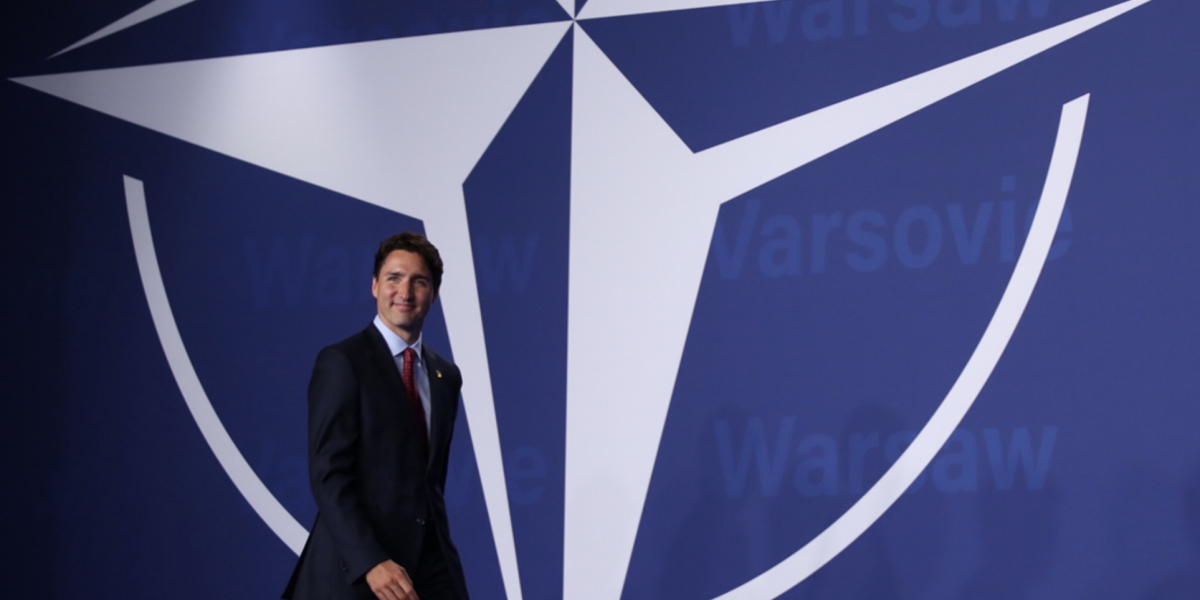 Justin Trudeau is currently in Brussels to attend a special summit of the North Atlantic Treaty Organization (NATO). Canada’s prime minister will likely praise an alliance that has become more belligerent – with wars in Yugoslavia, Afghanistan and Libya – as its Cold War pretext fades further from view.

After French President Emanuel Macron criticized NATO as “brain-dead” in November 2019 Trudeau immediately defended the alliance. A month later he declared, “for 70 years, NATO has been fundamental to Canada’s security and defence, and we remain committed to this alliance. In recent years, Canada has strengthened its engagement in NATO, taking on vital leadership roles. Today, Canada is leading NATO missions in Latvia, Iraq, and NATO maritime forces in the Mediterranean Sea and the Black Sea.”

But NATO is one of the most dangerous and violent alliances in human history, and Canada needs to get out.

Some believe NATO was a Canadian idea. At the UN General Assembly in September 1947 External Affairs Minister Louis St. Laurent warned the floor that if the Security Council’s veto crisis were not resolved countries would establish a NATO-type organization. His speech was the “first public proposal by a cabinet minister in the Atlantic area for an alliance for that region”, notes Maureen Patricia Cronin in Canada and Nato. In March 1948 Canada participated in top-secret talks with Britain and the US about the possibility of creating a North Atlantic alliance.

Since 1949 NATO is “the alliance to which Canada had devoted perhaps 90 percent of its military effort”, explained military historian Jack Granatstein in 2007. More recently, Canada’s representative to the North Atlantic Council, Kerry Buck, boasted that Canada has “participated and contributed to every NATO mission, operation and activity since NATO’s founding.”

From the early 1950s to early 1990s over 100,000 Canadian troops were stationed in Europe as part of NATO missions. In the late 1960s the Canadian air force had some 250 atomic bombs at its disposal in Europe.

At the end of his career Lester Pearson described the “formation of NATO”, not UN peacekeeping, as the “most important thing I participated in.” In 1963 Pearson told Parliament, “NATO has been the foundation of the foreign policy of Canadian governments ever since it was formed in 1949, and it will continue to be so.”

NATO and the military industrial complex

As a sign it wasn’t designed to protect Western Europe from Soviet aggression, Canada supported expanding NATO after the Cold War. Despite promises to Soviet officials that NATO wouldn’t expand one inch eastward if they accepted German reunification, Prime Minister Jean Chretien immediately pushed to bring in new members upon taking office in 1993. Without so much as a debate in Parliament, Canada was the first NATO country to approve the enlargement of the alliance in 1998. Canada has continued to push NATO expansion, including incorporating Ukraine.

During the alliance’s 1999 bombing of Yugoslavia, Canadian fighter jets flew 10% of all “strike missions” while 40,000 Canadians fought in Afghanistan in the 2000s. A Canadian general led NATO’s 2011 bombing of Libya.

NATO is attractive to Ottawa for a series of reasons. At the outset, the alliance was designed to suppress western European leftwing parties and to bring the declining colonial powers under the US geopolitical umbrella. No country was better placed to benefit from growing US hegemony (and as a colonial settler state without formal colonies outside its borders, Canada had little reason to fear US encroachment in the Global South).

Continuing/expanding the alliance after the demise of the Soviet Union undercut European centric security initiatives, which weaken Washington’s influence. Soviet leader Mikhail Gorbachev’s call for a “Common European home” with security and economic arrangements from Lisbon to Vladivostok was a threat to North American power.

Alongside US domination of Europe, NATO is also about the military industrial complex. The more emphasis placed on interoperability among NATO members, the better for US arms manufacturers. Not only does the US have by far the most advanced military, the US also places various restrictions on foreign weapons purchases so NATO standardization overwhelmingly takes place on US terms. Since many Canadian weapons companies are branch plants of US firms, NATO interoperability is also good for Canadian industry. Additionally, the 65-year-old Defence Production Sharing Agreement gives Canadian companies’ unique access to bid on US military contracts and they often provide components to weapons US firms export internationally.

Those who want peace and who are opposed to the military-industrial complex must call for Canada to get out of NATO.