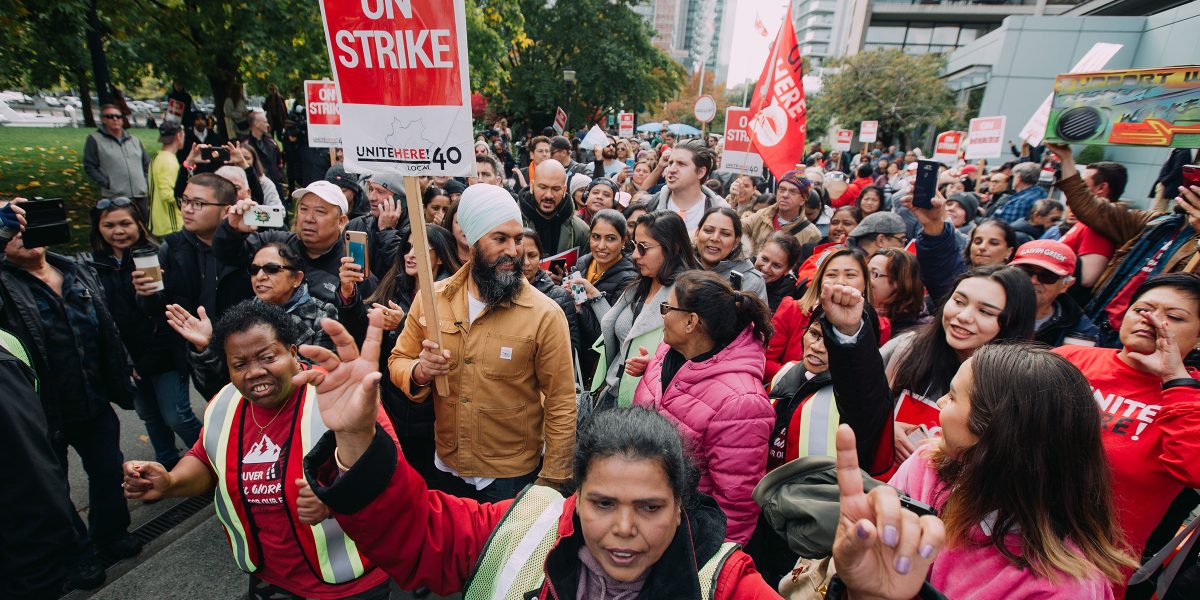 It’s Election Day! What was shaping up to be a ho-hum election has turned out to be anything but. If the polls are to be believed, the NDP and the Bloc Québécois are surging and Canada could be staring at its first minority government since 2011.

The polling and messaging for the months leading up to and the first couple of weeks were remarkably stable. The Liberals and Conservatives were neck and neck, while the NDP and Green Party were vying for third place, well behind the front-runners—and the NDP’s troubles were being blamed on Jagmeet Singh. It seemed like the only way to fight Scheer was to vote Liberal, and the only way to support the environment was to vote Green. But something curious happened on the way to the ballot box: the return of mass politics.

While climate was among the leading issues heading into the election, after the climate strike, it became the top issue for voters. No other issue saw as big an increase in priority as climate change did during the election.

The climate strike happened on September 27, but did not immediately benefit any particular party. This is unsurprising, as no party was front-and-centre organizing it. Every single party was playing catch-up to the movement. The Greens, Liberals, and NDP all tried to pivot to capture this sentiment on stump speeches, in social media, and in new ads after the September 27 strike. But it was clear the Liberals were in trouble after the climate strike. Their support amongst young people sank by 12 points in the days after the climate strike. Trudeau was put on the defensive over the Liberals’ horrid record on pipelines, access to clean drinking water, investing in the fossil fuel industry, and the lack of action to lower carbon emissions. Trudeau was exposed, and from that point on, both the Tories and Liberals struggled to regain the narrative. Green Party support also dropped after the climate strike, reflecting its tepid stance on issues around pipeline construction, Indigenous sovereignty, and market-based reforms to tackle climate change.

The NDP increase in the polls began roughly ten days after the climate strike, and really took off after the debates. But it is noteworthy that, when the NDP really turned hard to focus on climate issues, they began to catch on with voters who were disappointed with the Liberals. For instance, following the climate strike (which gave a platform for Grassy Narrows), Singh amplified the situation with his visit and press conference. Later, the NDP cheekily made hay of Trudeau’s climate change rhetoric, by issuing a media release that points out his government bought a pipeline (although the NDP’s record on this also not great).

The mass character of the climate strike helped boost the confidence, expectations, and imagination of people across Canada when it comes to climate change. Seeing the Tories, Liberals, and Greens fall short it, while the NDP was expressing a challenge to corporate power, inequality, oil subsidies, and the failings of reconciliation, the NDP’s appeal grew. NDP activists and leadership became more confident after the climate strike and more easily demarcated themselves from the Liberals. Polls showed it was only the NDP that saw an increase in confidence in their handling of climate change during the course of the campaign.

The climate justice movement and campaign groups such as the Migrant Rights Network have used the opening created by the climate strike to draw links between the climate crisis, racism, and migration, challenging the racist logic of nationalism and borders along class terms. This explains why, even though Scheer and Bernier have been hammering hard on the issue of immigration as a way to stir up hatred and racism, polls show that concern over “immigration” has dropped by half since the start of the campaign.

But the Liberals are trying to use toxic nationalism to rebuild their support, and we shouldn’t fall for it. This week’s “controversy” of Andrew Scheer’s not standing for the national anthem in protest over its polarization was a masterpiece display of cynicism by both the Liberals and Conservatives.

First, the Liberals are using very reactionary nationalistic language and line-of-attack on Scheer, painting him as having divided national loyalties. The left should reject the temptation to pile on this colonial and reactionary logic of being outraged by people’s lack of patriotism, of not “appreciating” Canada enough. This is the danger of the dual-citizen critique. If we give that line room, it will be used on the left.

In case anyone feels bad for Scheer, the Tories and the far right have for years used hyper-nationalistic rhetoric to shut down debate and bully opponents. Rebel Media, the Sun, and all the right-wing media are giving Scheer a pass, while for years they have been raking the likes of Colin Kaepernick over the coals for the very same method of protest.

Lessons of the campaign

Whatever the outcome on E-day, this election showed two things. First, that mass movements, protests, and extra-parliamentary campaigns can absolutely change the political terrain, even during an election. People’s ideas and confidence change in action, and that shifts the entire political debate about what is possible, and what they expect.

Second, that campaigns matter. Over the summer, the NDP looked as if they were in real trouble: they had no money, were tied with the Greens in the polls, and were dealing with internal dissent over Singh’s leadership. But during the course of the campaign, Singh was able to connect with real issues and movements. The NDP has run on a more left platform than they have in the last 15 years, which is good. But it was amplifying and connecting with social struggles that helped the NDP move the needle.

This is not to discount the impact of the quality campaign that Jagmeet Singh ran. Clearly, his performance in the debates and his campaign events and speeches resonate with voters. He effectively communicated the need to take on racism, to tackle inequality, and to address climate change. His personal popularity saw a major jump during the election. If Mulcair were still leader, or if the NDP were running on a more milquetoast platform, there is little chance they would have seen a breakthrough.

But at the root of the NDP revival in the polls and the source of the election shakeup was the climate strike. Simply put: no September 27, no NDP resurgence. This should also be a lesson for the NDP after the election: that the way to stay relevant and build support is not to focus on parliamentary maneuvers, but to keep following the lead and amplifying the voices of the movements outside Parliament.

A vote for Singh and the NDP is a rejection of the Tories’ and the Liberals’ failed leadership on issues of climate change, inequality, reconciliation, and public services. It is also a vote to reject racism. The stronger the vote for Singh and the NDP, the better position the broader left will be in to fight the racists and corporate interests. This isn’t because the NDP in power will simply hand workers reforms, far from it. The NDP’s record in office at the provincial level is disappointing.

The NDP, despite its many limitations, is the only party that links the labour and environmental movement. Unlike the Tories or Liberals, the NDP is seen in the media and wider society as the party representing working-class interests. And unlike the Greens, the NDP has a clear stance on basic questions like raising the minimum wage and defending a woman’s right to choose.

After this election, expect big fights to emerge in places like Alberta, Manitoba, and Ontario—and over education, public services, and workers’ rights. There is also a real possibility that the Canadian economy is heading towards troubled waters in 2020. Add in the possible political instability of a minority government at the federal level and this means the broader left is in for some real political fights in the coming months.

So vote NDP and, after Election Day, get ready to fight in the streets and workplaces because, as the climate strikers showed us, that is where our real power lies.