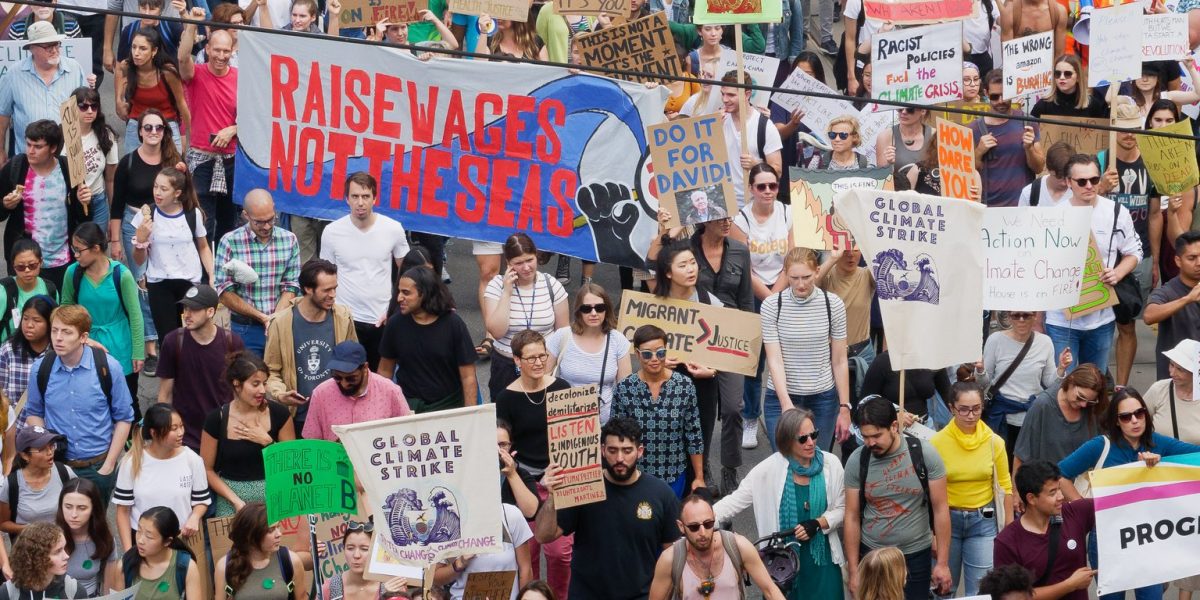 The global climate strike was historic. Taking place one week after the September 20 climate strike, the turnout across Canada and Quebec far-exceeded expectations: Halifax saw roughly 10,000 people hit the streets, Quebec City 30,000, Toronto 40,000, Winnipeg 12,000,  Vancouver 100,000, Victoria 20,000 and in Montreal a half a million people took part in the climate strike demonstration.

With 800,000 people in Canada taking to the streets, the climate strikes were some of the largest demonstrations in Canadian history. Considering the relatively scant union support for these demos outside of Quebec these numbers are outstanding. The fact that these demonstrations took place on a Friday in the middle of the day makes them doubly impressive. What is most significant, however, is that they took place during an election, when traditionally the pull of electoralism tends to tamp down extra-parliamentary expressions of politics.

While electoral parties participated in the climate strike, they were far from the dominant force inside the protests. The climate strikes were organized by young climate activists. For the past week climate issues have dominated the news cycle and forced politicians to talk about climate issues much more than they otherwise would have. Rather than endless discussions on Trudeau the person, the climate strikes have helped to put Trudeau’s policies on the hot seat. They have also put the Tories on the defensive, and highlighted the contradictions of the NDP.

Over the last four years the Liberals have spent a significant amount of political capital trying to be seen as taking action on climate change. Trudeau, eager to reboot his campaign after photos of him in blackface appeared, attended the Montreal Climate march but was dressed down by Greta Thurnberg in their one on one meeting and was reduced to a sideshow when he attended the climate strike. The demand for immediate and significant action on climate change helps exposes the Liberal’s empty rhetoric.

Trudeau announced a rash of green policies last week in a bid to get out in front of climate issues. He promised the Liberals would plant 2 billion new trees, conserve 25 per cent of Canada’s land oceans by 2025, and bring in interest-free loans for green renovations. Trudeau even promised to have net-zero emissions in Canada by 2050, through strategies such as tax cuts for small clean energy businesses–a vague and distant proposal that lacks any substance. Absent a vibrant climate justice movement, these promises may have buoyed Trudeau’s green image, but in light of the massive protests demanding immediate action the Liberals’ new promises look a new coat of paint on dilapidated house.

When it comes to the climate the Conservatives are in an extremely uncomfortable position. A good chunk of the Conservative’s base and a great deal of Conservative MPs do not even believe in human caused climate change. But carrying this position in public is no longer tenable if they hope to achieve any sort of electoral success. Even rightwing media news outlets like the Toronto Sun no longer challenge the basic facts of climate change. Instead they want to slow the discussion down, make it more “reasonable” and protect children from mental issues arising from, I kid you not, alarmism of climate change rhetoric. For the right, talking about climate change is much worse than actual climate change.

Scheer has already announced he would scrap the Liberals carbon tax and replace it with fines on heavy emitters (essentially another carbon tax). He has been making much hay out of campaigning to scrap the carbon tax, and without the mass climate demos this could have dominated discussions. Instead, the movement has pushed all the parties to at least pay lip service to the climate, and Scheer has announced a tax credit for green home renovations. But the Conservatives are wary of the climate issue: talking too much about addressing climate change threatens to wedge open a whole of contradictions within the Conservatve’s ranks. So it was no surprise that Scheer skipped the climate strike, spending the time making his own climate announcement, more money for roads, which will supposedly reduce greenhouse gas emissions by reducing idling. The next day he committed to developing a national energy corridor to transport fossil fuels from coast-to-coast.

The NDP, which already released a platform with proposals addressing climate change, spent the week reiterating its plans to invest billions of dollars into measures such as ending fossil fuel subsidies, electrifying all public transit by 2030, and retrofitting homes by 2050. Through the process they plan on creating 300,000 green jobs.

In response to Truduea’s promises of making Canada a net-zero emissions country by 2050, the NDP responded with a cheeky press release that stated “You. Bought. A. Pipeline.” While this exposes Trudeau’s two-faced position on climate issues, it also is more than a little hypocritical coming from the NDP. Yes Trudeau bought a pipeline, but it was at the insistence of the provincial NDP government in Alberta that had sided with oil and gas industry. For years the federal NDP has waffled on pipeline construction precisely because it has placated the Alberta NDP’s pro-pipeline agenda–and because the federal NDP leadership wanted to reassure Bay Street that the NDP could defend the interests of the Canadian state and its corporations. Even the BC NDP, which opposed the Trans Mountain pipeline, has used state force to invade Wet’suwet’en territory to ensure the LNG pipeline is developed.

These contradictions have created an audience for the Green Party, and the climate strikes could widen their base; but the mass demonstrations and the growing focus not just on emissions but on climate justice show that people shouldn’t settle for a single issue party that is unclear on whether they support women’s rights, and that pushed the BC NDP to stall on a higher minimum wage. The NDP’s shortcomings won’t be solved by voting for the Green Party, but by continuing to build the movement outside Parliament.

The NDP’s contradictory position on climate issues is a perfect example of why extra-parliamentary movements are so important for pushing politics to the left in Canada. Those subscribing to an electoralist approach to social change aim to reflect what they think are viable set of politics to win at the ballot box. NDP realists on the right hope to win on a Liberal-lite program while those on the Left think the road to victory comes through a more radical platform. Both versions of electoralism aim to tap into what they think is a winning constituency.

But the climate strike shows us another way to do politics, aiming to change people’s ideas through action. Climate justice organizers are not simply reflecting political ideas as they are, they are aiming to shift the political terrain to the left, change the consciousness of the working class and draw the masses into the political arena. This is a winning approach for the Left, both to shift the terrain during an election and to prepare the ground for after.

If you are in Toronto, on Wednesday October 2 Spring is hosting “System Change not Climate Change“, a talk featuring Climate Justice organizers Simran Dhunna and Mary-Alexis. The event is at the Workers Action Centre, doors open at 7pm.