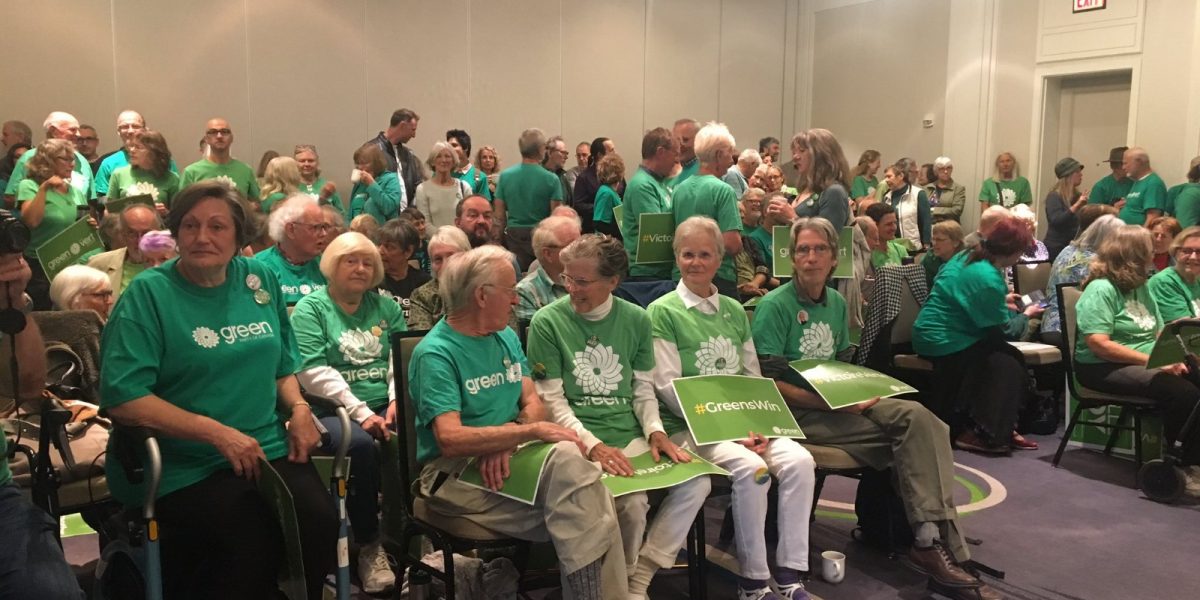 The Green Party has long tried to position itself as an alternative to the NDP to those who want to prioritize environmental issues, but for the most part have failed to capture the attention of enough voters to have a breakthrough. Unfortunately, recent NDP governments have provided fodder for the Greens to attract those rightfully concerned about catastrophic climate change. But they provide no alternative for the ecological crisis, or the economy that drives it.

The BC NDP campaigned on opposing the Site C dam but once in office supported it, despite the negative environmental impacts and opposition from Indigenous communities. Concerns about the government’s environmental policy only grew this year with legislation granting tax cuts to LNG projects producing and refining natural gas and petroleum, largely through fracking. While the government has stood steadfast in its opposition to a pipeline to the coast, pushing back against climate change means drastic cuts to the reliance on carbon fuels. Tax cuts encouraging the production of petroleum and natural gas goes against this.

Much worse, however, is the legacy of the Alberta NDP government, which was swept out of power earlier this year by the United Conservative Party. Rachel Notley was elected four years ago on the promise of a progressive government that would overturn the legacy of 40 years of Tory rule and ween the province off its dependency on oil production. Although she did not campaign as an anti-oil candidate, many NDP supporters insisted this was necessary for the party to have any chance of winning. Instead, the government turned into an obsessed cheerleader of the oil industry, desperate to be seen as on the side of oil production. Notley refused to change the royalty structure for the industry, which could have provided significant capital to start shifting the economic dependency on petroleum. Every chance Notley had she championed the Trans Mountain pipeline project to the west coast, going to verbal war against the federal and BC governments and even encouraging a boycott of BC wines. Despite all her efforts to depict herself as a champion of oil, the right-wing united forces and defeated the NDP in the subsequent election, overturning much of the progressive legislation and labour reforms that the NDP had passed.

Federally, the NDP has been better although getting there has been awkward, as Singh tried to figure out how to position himself on environmental issues while not upsetting his provincial counterparts. Only after losing a by-election in British Columbia in May did Singh come out resolutely against fracking and the LNG project. He has embraced the Green New Deal, a concept popularized by socialist congress member Alexandra Ocasio-Cortez in the United States, but the details the NDP are offering remain murky. While Bernie Sanders is putting together a radical environmental plan aimed at 100 percent renewable energy by 2030 and total decarbonization by 2050, the NDP’s Green New Deal is either short on specifics or significantly less ambitious, with retrofitting all houses by 2050 and non-carbon public transportation by 2030. In terms of a just transition, Sanders has offered 20 million new jobs and a five wage guarantee for those displaced. Singh, in contrast, offers 300,000 new jobs (a fraction of Sanders commitment, even with population difference factored) and access to EI for those displaced. How Sanders, a viable candidate for the Democratic Party nomination for president, can offer such sweeping visions, while the federal NDP, sinking in the polls and with nothing to lose, offers something so much meeker, speaks to why it is struggling to be taken seriously by those prioritizing climate change.

Green Party: neither left, nor right, nor an alternative

All that said, Greens posturing themselves as an alternative to the NDP as a progressive voice is all bluster and no substance. It isn’t simple enough to dismiss the Greens as “Tories on Bikes” as some do, since many earnestly see them as an anti-establishment voice, not spoiled by the lure of government or burdened by a spotty history of selling out when achieving power. In different places across the country, they have attracted candidates who have long records as community activists, such as Paul Manly, a former NDPer who was denied the party’s nomination in 2015 for what many believe was his vocal support of the Palestinian cause. But dig deep and we find a party that offers no political solution to the environmental crises and pushes economic policies that are regressive. As Green Party candidate Mark de Bruijn said recently, “Conservatives have some very good ideas. They are fiscally conservative, as are Greens. We have a lot in common with conservatives at their ideological core.”

Andrew Weaver, the leader of the BC Greens, has supported the BC NDP government through a Confidence and Supply Agreement. However, when it comes to limiting the government’s actions its focus has been largely on progressive economic changes. Weaver assured that British Columbia would not follow suit of other major provinces that had moved quickly to get minimum wage up to $15 per hour, a mark the province won’t reach until 2021 as a result. The Greens also blocked proposals to introduce card check to the union certification process, which would make it easier for workers to join a union. A higher minimum wage and unionization are not just good economic policies but good ecological policies—raising the wages of low-carbon low-wage workers, and supporting unions to make their workplaces more environmentally friendly. Not only have the greens ignored the ecological consequences of economic policy, but they can’t even be counted on to oppose bad climate policies: when it came to Site C or the LNG project, Weaver huffed and puffed but did not threaten to bring the government down on the issue.

Federally, the party has shown that opportunism may be guiding its approach this election. Just two months ago May suggested she would prop up a minority Conservative government. Now May says she won’t support any party because of the existential threat of climate change, but her plan to stop it includes continuing the tar sands. As a frustrated Quebec Green Party member pointed out, the party’s focus on using “Canadian oil” is a nationalist response that continues the massive emissions of the tar sands rather than rapidly building alternatives. The party’s climate commitments are only slightly better than the NDPs in some regards (retrofit houses by 2030, instead of 2050) but it also pales in comparison to Sanders in the US (60% carbon reduction by 2030, compared to Sanders 71%). But most alarming, there are no specific commitments in regards to job creation and protection to those being displaced, which are absolutely essential to getting broad public buy-in. Most shocking, however, has been May’s courting of incredibly reactionary opinions, suggesting that she had no problem with her MPs voting to curtail women’s reproductive rights and reopen the abortion debate.

Vote NDP and build the movement

This federal election will pose incredibly serious questions to those on the left. On the one hand, the two corporate parties will be battling for government, with the Liberals pushing hard on NDP and Green supporters to back them to stop a Conservative government. Despite backing tar sands to the point of buying the Trans Mountain pipeline, Trudeau will offer the bleak promise of Prime Minister Andrew Scheer as a way to pressure voters. But just as important will be the fight on the left about what kinds of politics can offer an alternative to the endless musical chairs of Con-Lib governments.

The NDPs collapse and the Greens ascendency show that the approach the NDP has taken for several decades of moderating its image and embracing neoliberal assumptions about the economy no longer excite people or mobilize forces to its cause. But the Greens will offer no alternative for truly remaking our economy and stopping climate change. The BC Green example shows that when it comes to the environment, it will not prioritize it in the narrow sense of stopping harmful projects—let alone the broader sense of supporting green jobs.

The NDP is the only mainstream party that links labour and environmental and movements, however partial their demands and however disappointing their record in office. But these limitations won’t be solved by voting for a fiscally conservative party that reinforces the false division between workers and the planet and that prioritizes the balance of power in Parliament over the balance of the ecosystem.

For socialists, right now the only choice is to vote NDP on October 21, but beyond that our priority should be to build the climate strikes this month and the climate justice movement after the election. We need radically different politics than on offer from any mainstream party, one that builds a Green New Deal from the bottom up—which prioritizes the needs of Indigenous and working class communities and is driven by democratic control of the economy, not quick fix market solutions that fall way short.