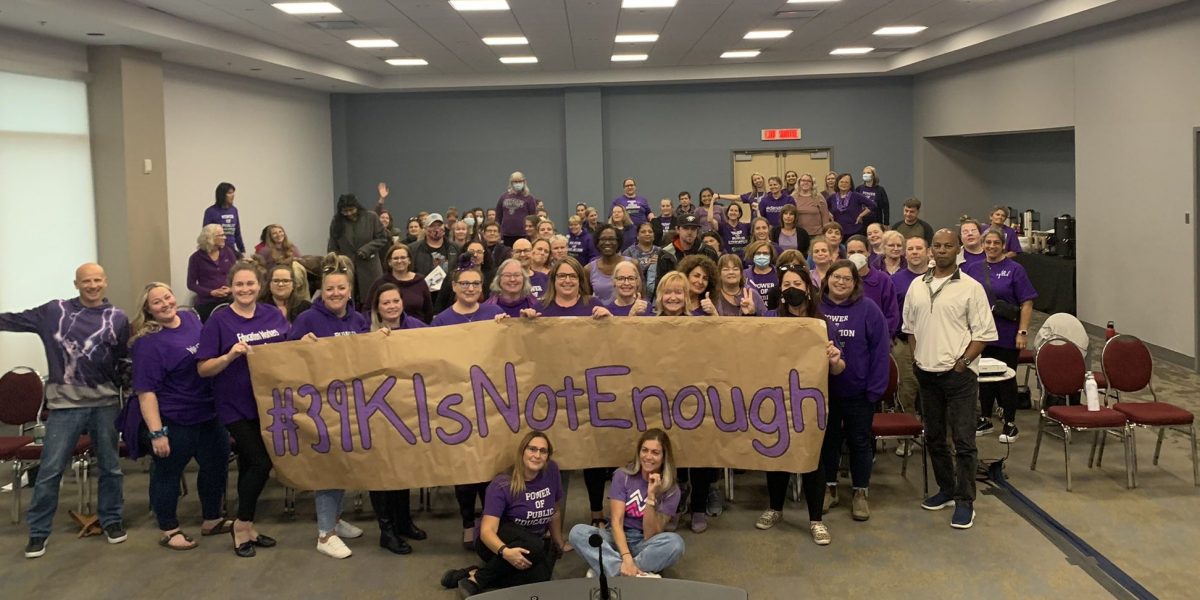 Ontario’s education workers have voted in record-breaking numbers to deliver a massive strike mandate to their union leadership. Over 45,000 out of 55,000 members of CUPE’s Ontario School Board Council of Unions (OSBCU) voted 96.5% in favour of striking if the current round of bargaining fails with the province. The turnout was an historic 82.6%.

In the last ten years, education workers have faced an 11% wage cut in real terms, as successive Liberal and Conservative governments have imposed wage freezes or caps on them. Many of them work two or three jobs just to make ends meet. They are fighting for decent wages, equal pay for equal work, improved staffing levels, and minimum standards for full-time hours.

These demands are at the heart of CUPE’s $39,000 is not enough campaign, which aims to counter the misinformation coming from Minister of Education Stephen Lecce and the Doug Ford government. It is also a space where education members can speak for themselves about the work they do and the impact their wages have on their lives.

Following the successful strike vote, the union is now in a position to file a “No Board” report, which could establish a strike deadline just weeks from now.

The stakes couldn’t be higher. The outcome of the fight for decent wages and better work conditions by education workers will set the stage for all other rounds of bargaining that follow it, including for teachers’ unions OSSTF, OECTA, and ETFO.

But it will also have an impact on all other workers who are struggling with skyrocketing inflation and the cost-of-living crisis. In more and more cases, workers are turning to strike action to fight back and, like the carpenters during their strike in May, winning big wage hikes.

When workers strike and win, it builds the confidence of other workers to do the same. It also has the potential to hold back governments and corporations that are trying to make workers pay for the economic crisis.

But when they face defeat, it can have a demoralizing and demobilizing effect on other workers. In a period of worsening precarity, and with right-wing politicians like Pierre Poilievre trying to blame inflation on social programs and government spending, activists must do all they can to support those workers who are willing to fight–and to show that workers’ self-activity is the best way to defend, and improve, their standards of living.

This fight is not without its fault-lines. The 96% strike vote is a remarkable achievement, and will give momentum to workers throughout the sector, but there is an urgency to deepen solidarity among rank-and-file members of other education unions, especially teachers, who are looking for ways to support their education colleagues and who don’t want to cross picket lines in the event of a strike.

There is also the real threat that Ford will simply legislate education workers back to work if they strike or, worse, pass preemptive legislation that deems them “essential workers” and strips them of their right to strike.

This would be a watershed moment for Ontario’s labour movement, as it would open the door to a wholesale gutting of the right to collective bargaining in the province. Without a mobilized rank-and-file, many union leaders may feel as if the only way to fight back would be a years-long court challenge or trying to elect the ONDP in 2026.

Either of these strategies would be a major set-back. If workers are showing the willingness to fight back now, we need to build their fights and the confidence of all other workers to join them.

It won’t be enough, however, to simply put demands on union leadership and wait for them to build a rank-and-file fightback. Trade union and decent work activists must start that work now and, where it’s already underway, expand it.

We need to talk to our co-workers, in our own workplaces and in others, and invite them to be part of this struggle. And we need to talk to parents, neighbours, and people in our communities, to get them on side, too.

In the wake of the inspiring strike vote, here are some immediate steps all of us can take to show our support for education workers:

With a strike deadline possibly weeks away, it’s crucial that we use every moment between now and then to build broad public support for education workers and their demands, and to mobilize workers in other workplaces and sectors to be part of the fightback.

If education workers win, we all win, and every other fight with the Ford government will be stronger for it.