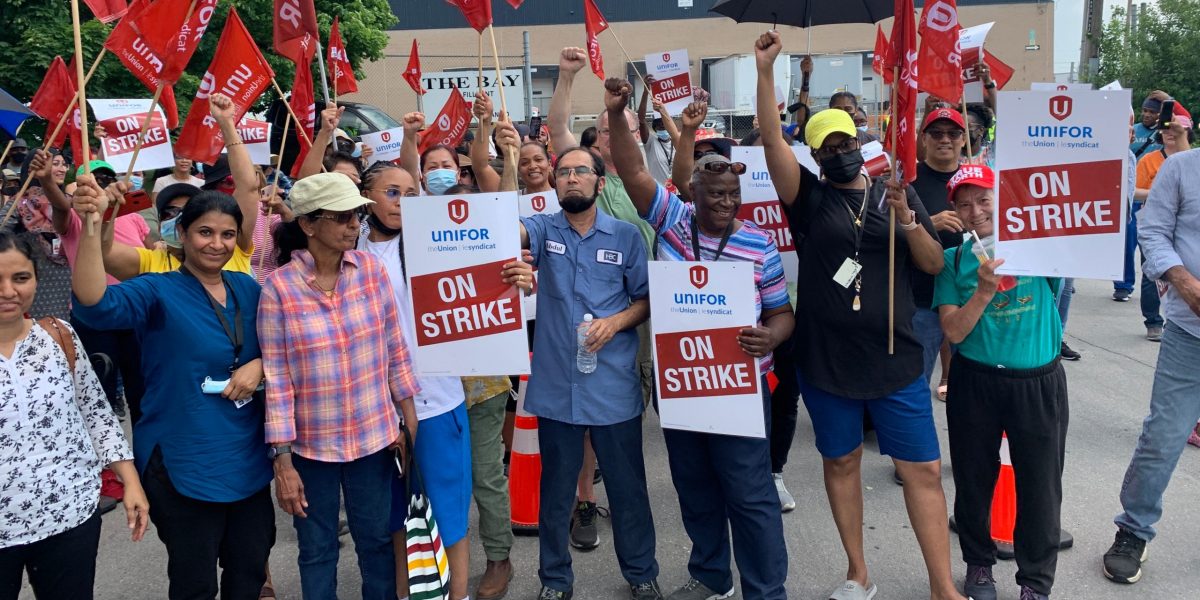 The cost of living is going up and workers are struggling to keep pace. Walk into any grocery store and you will find your weekly food budget gets you less and less. Whatever you need and wherever you get it, chances are its price is increasing. The rising cost of living is spurring workers across the Canadian state into industrial action.

Workers on the move

In recent months, labour stoppages have taken centre stage amid skyrocketing prices. In May, roughly fifteen thousand Ontario members of the International Brotherhood of Carpenters and Joiners of America went on strike across the province over wages not keeping up with inflation.

As president of the Carpenters’ District Council of Ontario Mike Yorke put it, “the carpenters are standing up for working people and to try to get a better cost of living assessment in the middle of this crisis in our country. Cost of living is through the roof.” After three weeks of construction projects grinding to a halt, carpenters won a new agreement.

In June, 750 signals and communications workers at CN Rail went on strike across Canada. The workers, part of the IBEW, cited wages and benefits as the primary motivators for walking off the job. Workers reported that CN offered them an 8% wage increase over three years with a 2% signing bonus (which CN had the nerve to call a 10% increase). But with reports that Canada’s inflation rate hit 7.7% in May, even an immediate 8% raise would just barely cover rises in the cost of living.

Though the union and employer have agreed to binding arbitration, the strike forced CN’s hand and drew attention to the untenable living situation working class people are facing across the country. CN’s offer revealed the gulf that exists between what the working class needs to survive and what stingy bosses are willing to offer.

While these two strikes have had high profiles and large numbers, a variety of smaller (but no less important) actions continue to emerge across the country. Warehouse workers for the Bay recently ended a nine-day strike that saw workers win, among other victories, a 13.3% wage increase. Last month, Kleenzone workers in Toronto ended a ten-day strike and won a wage increase of 19%. Around the same time, cannabis workers in Québec ended their strike with a 34% wage increase in hand.

When the cost of living rises, stagnant wages are shrinking wages—the same paycheque cannot buy the same necessities and cover the same payments from one week to the next. Throughout the pandemic, CEOs and bosses have taken home record profits while workers have had to navigate the stress and turmoil of the pandemic.

As inflation continues to rise, politicians, bosses and the media are looking to paint workers asking for pay increases as exacerbating the problem. But inflation is not the result of wage-price spiral; it is a product of the capitalist system. Supply chain crises, profits, war and pandemic speculators are driving the cost of living up and workers are just trying to keep their heads above water. For the ruling class, raising interest rates, increasing unemployment, and driving the economy into a recession is not about solving inflation—it is about making workers pay the price for the current crisis.

Higher inflation is leaving workers with no other choice but to organize and fight, one workplace struggle at a time. While the bosses try to pin inflation on the working class, striking workers show us that we have nothing to lose and everything to gain in fighting for higher wages.