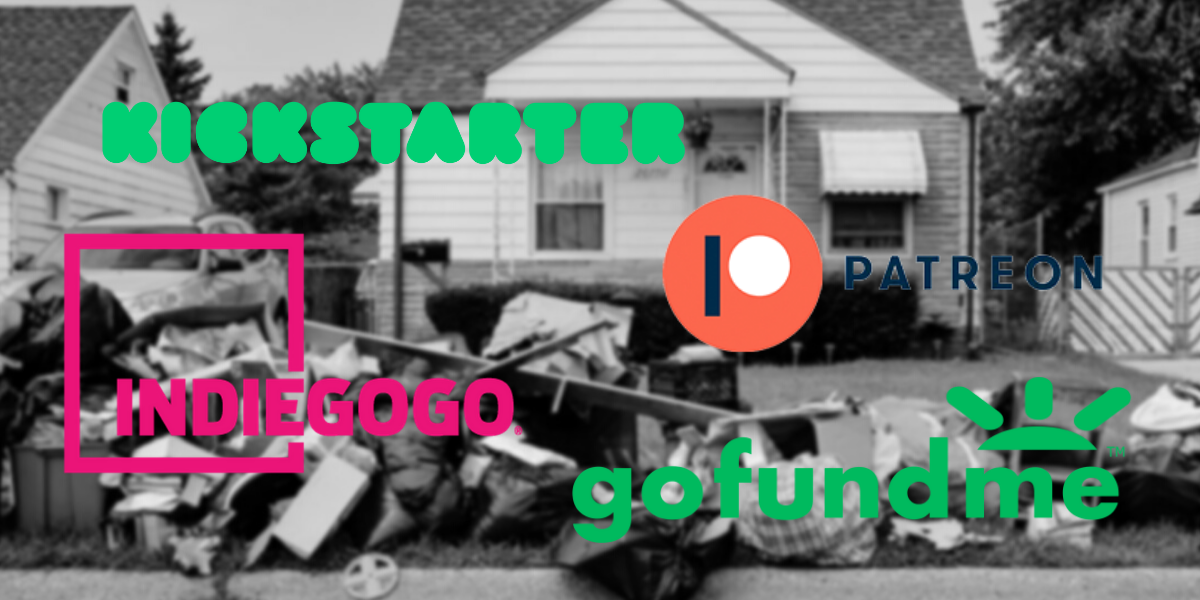 Without government support for basic needs—such as housing, food and transportation—many have turned to crowdfunding for solutions, especially in the context of COVID and the economic crisis. Since the onset of the pandemic, I have been a part of a digital mutual aid collective, where we amplify crowdfunding requests through Instagram. Crowdfunding has become a vital lifeline for survival and source of mutual aid in this time of crisis. It also reflects the failures of capitalism and points to the giant gaps in our social safety net, which individual donations can’t fix but which collective movements can overcome.

Crowdfunding is not a new phenomenon, but the creation of a number of online platforms—such as Gofundme, Kickstarter, Indiegogo, and Patreon—has made it easier to solicit fundraising through small online donations. The industry grew rapidly. Gofundme, for instance, started in 2010 and by 2019 it had 120 million donations that had raised over $9 billion. Since its founding in 2012, Kickstarter has raised $4.6 billion from 17.2 million donors.

While most crowdfunding platforms were initially billed as avenues for financing creative endeavours and innovation, they were quickly inundated by fundraising efforts to cover medical bills, rent and all sorts of other financial emergencies. These fundraising campaigns highlighted a basic fact for most working class people in our society: it is expensive to be poor. The economic crisis in the wake of the pandemic has only accelerated the use of crowdfunding platforms to make ends meet.

We are not the only Instagram account dedicated to mutual aid and crowdfunding. There is a whole network or pages dedicated either to online crowdfunding or mutual aid efforts in specific locations—such as newwxrldnetwork, funds4caregivers, openyrpurse, redistributeurwealth, and more.

My experiences with digital mutual aid have given me an understanding of how these fundraisers tend to play out. Most fundraisers do not meet their goal, many only receiving the occasional $20 contribution, and rarely receive the ongoing support they need. Contributions spike when there is a tragedy in the media – the guilt felt by non-Black and non-Indigenous people spurs them to action. As media coverage settles, their guilt dies down, taking with it their monetary support of Black, Indigenous and other people of colour.

On top of that, Instagram’s algorithm continually represses all of our posts, and we have to continue to find new ways around it. For example, we request that people who comment write more than five words, never saying the words ‘boost’, ‘algorithm’, or ‘bump’, as these words are flagged by Instagram and further repress our posts. Digital crowdfunding is accessible to many, but there are so many barriers that make this particular iteration of digital mutual aid unsustainable.

It is worth noting that Gofundme continues to profit from all fundraisers on their platform, regardless of their public statements decrying the way their platform has become the go-to for those struggling to pay for essential needs.

Crowdfunding is symptom of a failed system

Crowdfunding is a symptom of capitalism, placing full responsibility on individual people—primarily marginalized and oppressed populations—to survive state-sanctioned neglect. Many people use crowdfunding as a means to pay for basic necessities like housing, groceries, and medical bills. This speaks to the failure of the state to provide full, robust support to people, instead individualizing issues which arise from systemic racism, settler-colonialism and exploitation.

Studies show that people of colour, notably Black women, are underrepresented in online crowdfunding spaces, despite the fact that they are less likely to have insurance and are more likely to have chronic illness and other forms of injury. These statistics highlight how the internet is shaped by external structures: white people are overrepresented in medical crowdfunding campaigns because of how racism has shaped the creation of the internet. Overall, this pattern speaks to the way the state intentionally neglects Black and Indigenous people, continuing a legacy of intergenerational trauma while simultaneously severing any possibility of building intergenerational wealth, and thus, stability. Crowdfunding has become a necessary survival tactic for many who have been abandoned by the state.

Turning to crowdfunding is for many a last ditch effort to raise funds in an emergency. When divorced from the support of a community or a network, crowdfunding can often be a degrading and dehumanizing experience. People are forced to publicize some of the most difficult and traumatic experiences of their life in order to elicit enough sympathy to garner funds. Most of the time these efforts fail, in part because of the overwhelming number of people who have turned to crowdfunding for basic needs. There is nothing reciprocal, compassionate, or truly supportive in being at the mercy of strangers on the internet. Rather than build collective solidarity, crowdfunding can often reinforce feelings of isolation, hopelessness and alienation.

Crowdfunding does not exist in a vacuum. All crowdfunding campaigns are subject to the very same structural elements that necessitate their existence. As mentioned before, marginalized people—Black women being the most impacted demographic—are underrepresented on crowdfunding platforms. The most successful campaigns are those with social capital, especially with respect to digital literacy and comfort, marketing experience, and lacking in perceived moral ambiguity. This creates the conditions wherein campaigners, particularly those who have been marginalized, feel as though they must share private, personal details of their lives to the internet in order to gain the trust and sympathy from potential supporters. The demand for proof of circumstance is very telling of an inherent distrust of working class, racialized, queer, trans, and disabled folks as a result of respectability politics.

My experience with online crowdfunding can affirm this: those requesting support often feel the need to go above and beyond, providing pictures of eviction notices, wounds or medical conditions, or divulging deeply painful trauma in order to receive support they are entitled to. This doesn’t guarantee their campaign’s success, however. Demanding such intense forms of emotional labour from already vulnerable groups without any guarantee of payoff is nothing short or absolute cruelty.

From survival to solidarity

What campaigners really need is ongoing, tangible support and care, and an assurance that their needs are not ignored. Capitalism isolates and disempowers people, and crowdfunding within capitalism will always be an individual struggle. This isn’t to say crowdfunding shouldn’t be used, but if it is to be more than a mechanism for survival it needs to be connected with wider community support and help build political capacity. Crowdfunding efforts that uplift and boost the confidence of the campaigner, and help educate and mobilize the public, can be a powerful tool in our arsenal for social change.

There are cases where crowdfunding campaigns find success. Many local organizations, like the Encampment Support Network (ESN) in Toronto, are open to donations that are used to provide essentials to our unhoused neighbours living in encampments. Community members regularly support ESN not only through monetary contributions, but by physically showing up to resist forced evictions, contributing to phone and clothing drives, and participating in phone and email zaps that pressure our government to support those living in encampments. Collectives like ESN allow for communities to fight for the most marginalized residents in a number of ways while building collective consciousness and power.

A very popular meme quips that those engaging in mutual aid practices are generally working-class folks supporting one another, no matter the personal cost. It makes sense that mutual aid has been embraced by the working class: it is a way to create a system of care beyond the capitalistic values of hyper-productivity and climbing the proverbial ladder. Mutual aid recognizes community care as a political practice which requires the ‘sacrifice’ of individual glory for the sustenance and health of those in your community.

The pandemic has increased inequality and the racial wealth gap. Those who have been hardest hit by COVID and its economic fallout have been the lowest waged workers who are disportionately racialized and women (often both). The explosion of crowdfunding as means of survival speaks volumes about how the state has failed to meet the needs of people. More and more, people are turning to one another for care, safety, and support, and the positive experiences of mutual and support should be celebrated.

But this is no substitute for putting demands on the state and employers, and can sometimes distract from these demands. During the peak of the pandemic when there was mass pressure on the Ford government to legislate employer-paid sick days, crowdfunding pages emerged for paid sick days. While well-intentioned, crowdfunding is incapable of providing the guaranteed and job protected leave that forms the basis of legislated paid sick days. As a tactic they suggested that workers should pay for their own sick days, which alleviates pressure on the government and employers. This initiative also shared features common to other crowd-sourcing campaigns: the demand for proof of circumstance, and the inability to meet the demand. The page was rapidly overwhelmed, and directed people to the federal government’s income support program—which was exactly what the demand for employer-paid sick days was trying to overcome. Low income, women and racialized workers are disproportionately denied paid sick days, and the solution is not temporary individual donations but equal workplace rights for all.

The racism and inequality in our society is not an accident, it is a feature of capitalism. The rich and powerful have a vested interest in fighting any and all collective attempts to foster working class solidarity and movements fighting to make the rich pay. As Toni Morrison once said, “the function, the very serious function of racism, is distraction. It keeps you from doing your work. It keeps you explaining, over and over again, your reason for being.” In the same way, capitalism forces people to explain why they must turn to strangers on the internet for money to survive, diverting energy into this constant, vicious cycle—energy that could very well be used to organize and claim what is rightfully ours.

In the context of mutual aid, crowdfunding can be a beautiful practice of care, reciprocity, and support. If this is part of movements to achieve collective security and supports, we can win important gains such as stronger rental protections, expanded public services, investments in our communities, strong income supports and strengthened workplace rights.