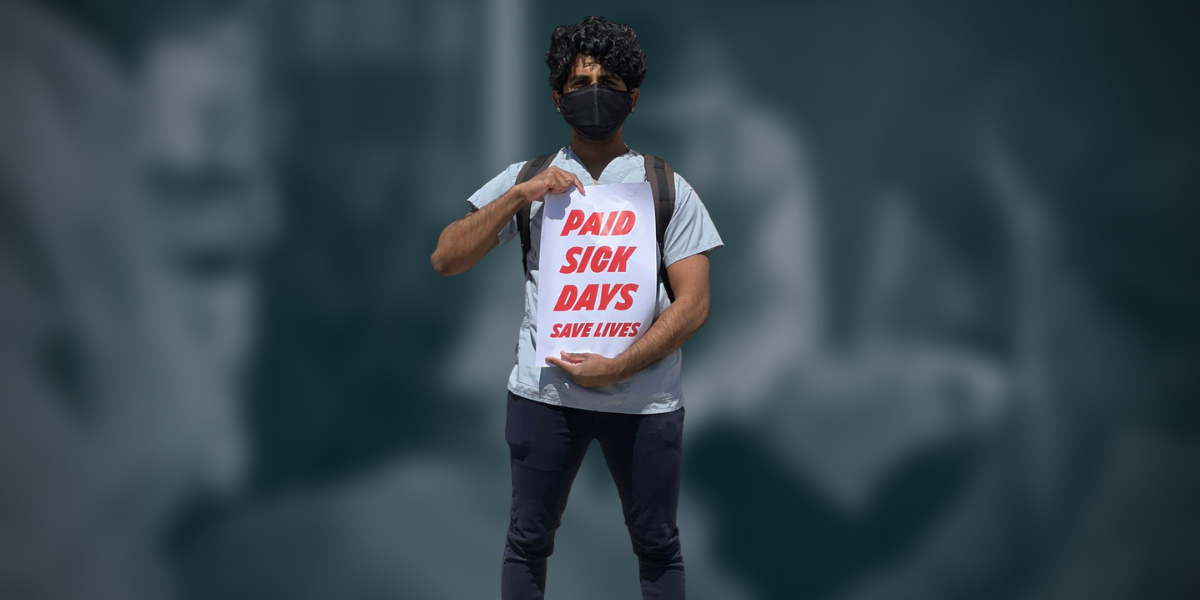 In response to the movement for paid sick days across Canada, the governments of BC, Manitoba, Ontario and Nova Scotia have delivered a few temporary and government subsidized paid sick days. Spring Magazine spoke with emergency physician Gaibrie Stephen about why all workers need permanent and employer-paid sick days.

How does the denial of paid sick days affect the pandemic, based on your experience as an emergency physician in one of the region’s hotspots?

In the region where I practice emergency medicine from September to December 2020, 66% of cases of COVID-19 were linked to a workplace outbreak. According to Peel Public Health, 1 in 4 people went to work with COVID-19 symptoms. The emergency department often acts as a microcosm of the wider society and accordingly I have seen several cases of COVID-19 linked to workplaces. We hear often about factory outbreaks like the one in Amazon– those impacted by these factories are often also my patients.

When I talk to my patients they tell me that a lack of adequate paid sick days has been a reason why they continue to go to work with early symptoms of COVID-19. I get asked frequently for example to write notes “demanding the employer pay for my time off” as people are struggling to isolate themselves safely.

Beyond the pandemic, paid sick leave is a key tool used to improve the use of primary health care. In jurisdictions where paid sick days are accessible people are more likely to access cancer screening, routine diabetes care and primary care initiates in general. Practically speaking, this makes sense as most clinics are only available during daytime hours as are labs and medical testing centers.

From the emergency medicine standpoint I frequently see patients sign out of the emergency department in order to go to work. I have for example had patients who I have diagnosed with life threatening conditions like heart failure who sign out of the emergency department because they cannot miss work. As an emergency physician I have been trained to identify medical emergencies but when patients that I am treating for emergencies are signing out of the department in order to go to work, it is clear: many workers in this province are not working to thrive but rather barely survive. Paid sick days are one way to level the playing field for all workers, particularly those who are most disproportionately impacted by a lack of healthcare access. We know for example, up to 70% of low wage workers have no access to paid sick leave. This is how we mitigate the already horrible impacts of poverty on people’s health.

Paid sick days have long been a demand from the workers movement, but during the pandemic it has galvanized the medical community. Why is it important for health providers to amplify workers demands?

It is important in these circumstances to take on the role of allyship and solidarity as we move to amplify workers demands. The reality is we all share the common thread, we are workers. I believe that labour movements are far more powerful when we form allyship with other labour movements– I also believe we must form allyship with consumers. Our struggles are not equivalent, but we all benefit by showing solidarity. We must demonstrate the value of all labour including those excluded from mainstream conversation.

Frankly, I understand that people want to be helpful. It is difficult to see the movement for paid sick days and feel powerless to the fact that the government is dragging their feet. I do empathize with this. We must however take time to listen to organizations and organizers who have been doing this work for decades. This struggle we are seeing now for paid sick days is a grain of sand in the storied history of labour movements, we must listen– to both organizers and workers.

Paid sick days must be legislated into law, this is the only way that we can ensure that all workers are protected. The problem with crowdsourcing is that it does two things: firstly it undermines the effort of what organizations are demanding by suggesting that paid sick days is a charity, it also diverts funding. Secondly, crowdsourcing to create a retroactive payment to workers simply reinvents CRSB. We cannot fix the fundamental lack of paid sick days by simply creating a locally grown version of CRSB.

Governments from the BC NDP to the Ontario Conservatives have said that employers shouldn’t have to pay for paid sick days because it will hurt small business. What’s the evidence for the impact of paid sick days on the economy, and why is it important for employers to pay?

Great question and frankly this has been incredibly frustrating to break down. Just because something sounds expensive does not mean this is borne out in fact. The reality is that absenteeism (the cost of paying someone to stay home) is less expensive than presenteeism (the cost of someone coming to work sick). This is because when a worker comes to work when sick they are not only less productive but also with communicable diseases create outbreaks at work, resulting in overall loss of productivity. Research from the US suggests the cost of presenteeism is up to 10x more than the cost of absenteeism.

Don’t take it for me, jurisdictions in the US have demonstrated this. In San Francisco up to 9 days of paid sick days has been legislated since 2007 which is both employer paid and delivered. Two out of three employers not only supported the law, but six of seven did not report any change in profitability. We also see similar data from New York.

It is important for employers to pay for paid sick days because this is a fundamental labour right. Many jurisdictions already offer this, but Canada is one of few countries without any acute paid sick days policy. Paid sick days paid for by the taxpayer is nothing but a massive corporate subsidy for what should be the cost of running an ethical business. Here in Ontario we have a great organization called the Better Way Alliance that is a group of over 60 small businesses that have come forward in support of paid sick days.

To get into the details, WIPB provides workers with up to three days of sick leave to cover their wages up to $200. This is because employers are tasked with applying through WISB for reimbursement for providing sick days, and WISB will then provide the employer up to $200 per day. In order words, a person who makes minimum wage does not get paid $200 per day but instead up to their usual wage, which is approximately $114 per day for an 8 hour day. An individual who makes over $200 a day would get paid instead a fraction of their wage. Paid sick days must be fully paid. When we look at Germany for example, when the rate of paid sick day income replacement was lowered to 80% from 100%, the reduction in pay led to an increase in contagious presenteeism in the workplace.

The other issue with WIPB is that it is not permanent and set to expire in September. Returning to my earlier point, paid sick days is not a pandemic specific issue but rather a longstanding issue with a storied history.

Finally, WIPB is inadequate: three days of sick days does not cover the quarantine period for COVID-19. Beyond the pandemic, a 2019 study found that physicians recommend patients stay home for influenza for a median of 4 days. We have heard the conservative government argue that WIPB is a bridge to CRSB in order to overcome the fact that CRSB requires missing 50% of the work week in order to apply. A paid sick leave policy that is a bridge to another policy requiring an application and retroactive payment does not fix the inherent problems associated with an application program. Applying to CRSB is not easy, especially for someone who may not have ready access to the internet or if english is not their first language. Paid sick leave policies must be seamless and without applications for workers to use it effectively.

Those communities hit hardest by COVID-19 have had the least access to the vaccine. What are the structural conditions driving this disparity, and how can we promote vaccine equity?

We have seen a vaccine rollout that very early on did not prioritize equity. The data early into the vaccine rollout was clear: we were simply not prioritizing communities that were hardest hit by COVID-19. We knew, for example, that despite early data suggesting variants of concern increased at 2.7 times faster in essential worker neighborhoods there were vaccine access issues in these same communities. Access issues including a lack of pharmacies but even access to larger testing centers and work based vaccine rollouts. Thanks to the hard work of advocates we have now seen pop up clinics in hard hit neighbourhoods and workplaces, but this did not come without the hard work of advocates.

Going back to the issue of paid sick days, the SEIU survey of frontline healthcare workers found that 64% were worried about losing pay to take the COVID-19 vaccine. Studies would suggest that paid sick days is an excellent intervention to improve vaccination rates. One 2014 study from the US predicted that universal paid sick days would increase vaccinations by 1.6 million annually for example.

On May 1 the decent work relaunched as Justice for Workers, and you amplified the call the higher minimum wage, justice for temp workers and paid sick days for all. Based on the organizing of the past year during the pandemic, what are the prospects for movements to win real and lasting change beyond the pandemic?

What I’ve realized in being a part of the paid sick days movement is that labour is something most people understand. The reality is that there are far more workers in this country than there are employers. When I speak about paid sick days for example, I have noticed people from all across the political spectrum resonate with the idea. The pandemic has likely helped because it has illustrated how issues of labour are something which directly impacts public health. I believe this is an excellent opportunity to engage with people about the nature of their work and the value of their labour.

We have seen in recent years a rise in populism, especially far right populism. Frankly, I worry that populism that has been rooted in racism or xenophobia sometimes attracts people who are most financially vulnerable because it creates common enemies for people who have been systematically excluded from decent economic rights. I believe that speaking about labour and improving the material conditions of people’s lives offers many individuals a way out of radical right wing populism. Labour movements are one of the most powerful ways we have to protect people by ensuring that all work is valued. I believe that people living in Canada resonate with this.