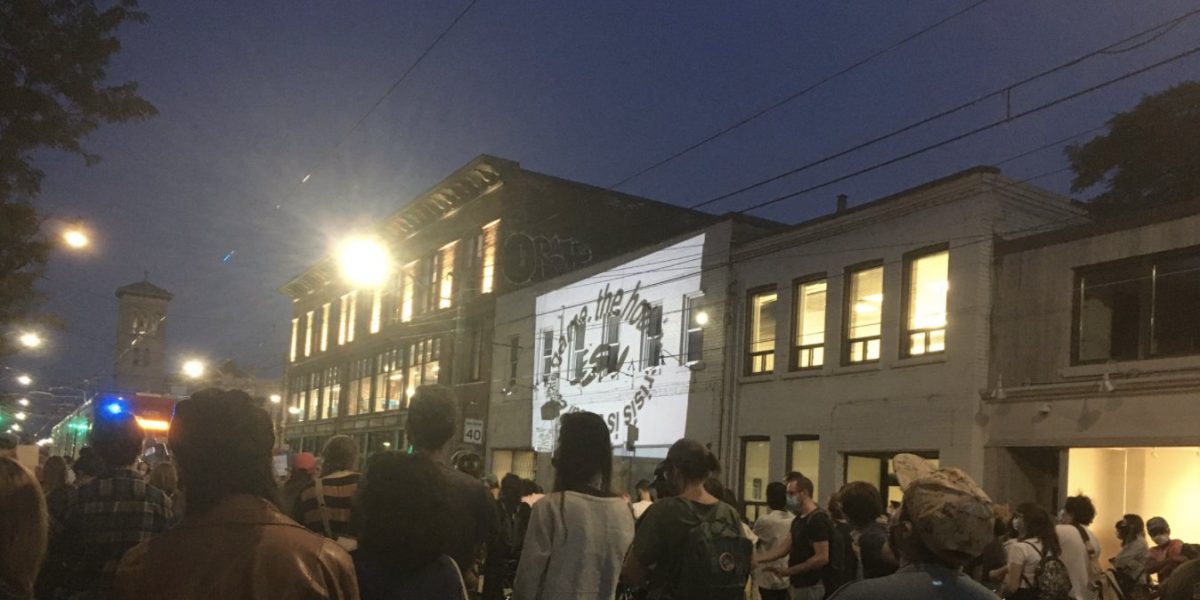 On Wednesday, September 23, several hundred community members attended a “Meal and March for Housing” in Toronto, organized by the Encampment Support Network (ESN) to demand a dignified, long-term housing plan for unhoused people. Currently it’s estimated that there are over 9 000 unhoused people in the city, and The Toronto Foundation estimates that 10% of renters – at least 130 000 people – are at risk of eviction.

The event began at 5pm with a community meal in Moss Park. Speeches began with a Land Acknowledgement, followed by a ceremony led by Les Harper, featuring singer Isaiah Cada, and dancers Nichole M. Leveck, Mike Healy, Cheryl Trudeau, Indiana and Nazarene. The attendees then heard a rousing speech from Toronto harm reduction activist Zoë Dodd, who denounced the city’s failure to provide necessary supplies and services to residents of encampments, as well as the city’s lack of a plan regarding how to safely house Toronto’s growing population of unhoused individuals going into the Winter. Following this, encampment residents shared their personal experiences living in the city’s shelters, respites and encampments:

Moss Park resident Sasha explained, “This isn’t a COVID issue, this is a poverty issue. This is… no housing. This is not because of COVID. This is because the government doesn’t give a fuck about us… and it’s a shame.”

Another resident, Little Matt, pointed out the fact that city officials haven’t visited their encampment once during the pandemic:

“Mayor Tory – he didn’t come through here. He didn’t check us. He didn’t come see. This guy… we’re some of his biggest constituents, and we vote. Don’t get it twisted. We vote, and I voted for that asshole, and he hasn’t come here once. Not once. My boy over there had the cops come and rip his shit down. He ain’t doing nothing. He wants his rights. We’re all entitled to some housing, some cleanliness, some showers, some food. That’s not a privilege, ‘eh? That’s a fucking right.”

After the speeches in Moss Park, attendees marched down Sherbourne Street chanting, “What do we want?” “Housing!” “When do we want it?” “Now!”, and, “No more stigma, no more hate, no more empty real estate!” The march concluded at the corner of Queen and Parliament where the Kielburger’s WE Foundation (who made headlines this Summer over the fact that they were paying students well below the minimum wage to work at the organization) owns several vacant buildings.

ESN speakers explained that these vacant buildings could be expropriated by the city and turned into affordable housing, and floor plans were projected on the wall of one of the buildings to show what that might look like, followed with pre-recorded consultations with encampment residents that were supposed to be carried out by the city.

An unknown group of individuals also decorated the sidewalk around the WE-owned buildings with decals and stencils that read, “WE need housing. The WE organization is hoarding empty properties in the Queen and Parliament area that could be used as housing. People need permanent affordable housing in their communities. The housing crisis is a real estate game.” Members of the ESN then spoke, followed by Toronto author and activist Desmond Cole, who denounced TPS presence at the rally saying, “We’re doing just fine without you.”

What is the Encampment Support Network?

The Encampment Support Network is a network of over a hundred individuals – not an agency or organization – who have volunteered their time and resources to providing essential supplies (such as fire extinguishers, food and water, and clothing) to residents in six of Toronto’s encampments, and advocating on their behalf, filling-in where Mayor Tory and city officials have failed to do so. So far, ESN volunteers have distributed $83,000 in humanitarian aid from anonymous donors. Since the pandemic began, more unhoused people in Toronto have opted to live in these encampments (although they have always existed).

Residents cite a lack of available shelter “beds” (often they sleep on mats or cots), and respites and shelters as vectors for the spread of COVID-19, as two major reasons among a myriad of others. While to-date the city has reported 70 COVID-19 outbreaks in the city’s shelters and congregate settings, there have been no cases reported within encampments. Despite Premier Doug Ford’s announcement earlier in the year that no encampments would be cleared during the pandemic, Toronto Police Services have been dispatched to clear encampments on numerous occasions.

What are the ESN’s demands?

You can visit ESN’s LinkTree page to sign-up for the newsletter, listen to the podcast and donate. You can also follow ESN on Twitter and Instagram, or reach out directly to volunteer or donate at report.on.toronto@gmail.com.