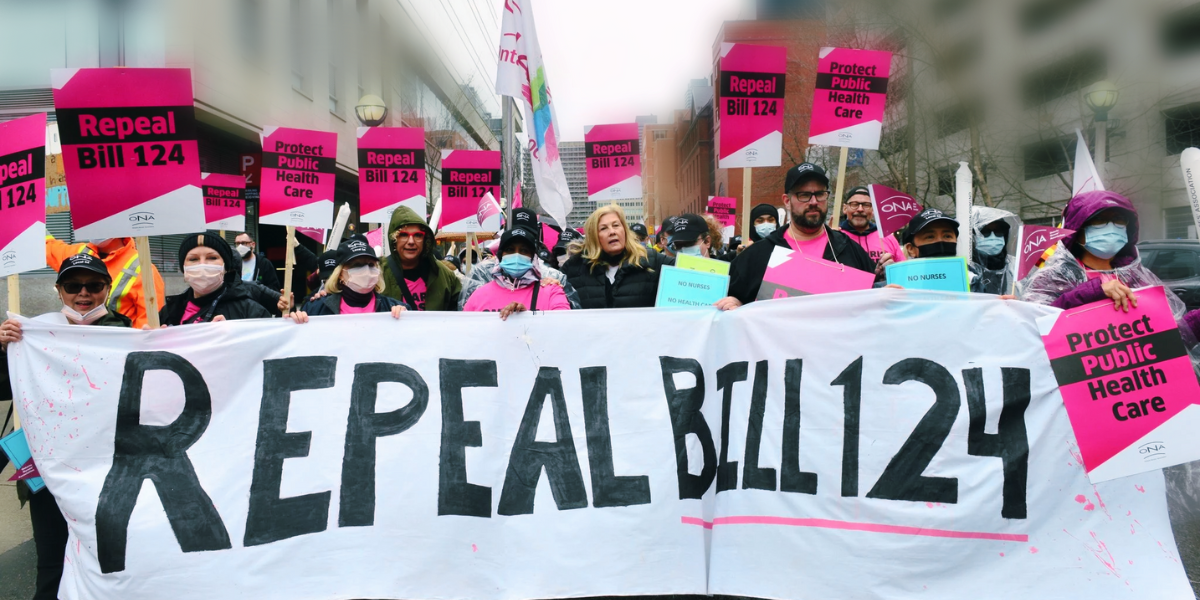 The Ontario Conservatives’ Bill 124, which caps public sector workers’ wages at 1% (with some notable exceptions), was passed in 2019 as part of a rightwing assault on workers’ rights. At the time, Ford’s Conservatives justified Bill 124 as necessary to deal with the deficit. As the subsequent years have shown, the deficit crisis of 2018/2019 was manufactured as a way for the Conservatives to attack public services and roll back workers’ rights.

From wage suppression to privatization

Bill 124 was never popular in the public sector, but has become increasingly despised by public sector workers over the course of the pandemic. Workers in the healthcare sector and education workers who were held up as heroes during the heights of the pandemic have had their wages capped at 1 percent a year, which is effectively a wage cut. Given the gendered nature of these jobs, Bill 124 is an attack on women workers.

Rising inflation, which is now running at over 8 percent a year over year, the highest in decades, is for many the last straw. Hospital workers and educators who have worked amidst years of cutbacks and a pandemic are seeing their real earnings being dramatically clawed back by the government.

In response to the pressures of the pandemic and the wage restraint, nurses and other healthcare workers have been quitting in droves. This has led to staff shortages and a healthcare crisis in the province – with some hospitals cutting back on services–including ERs and ICUs. The government has refused to repeal Bill 124, claiming it is not the source of the problem. Instead it has brought in a one-time bonus for nurses of $5,000, committed to hiring more nurses and is using the current crisis to push privatization of healthcare services.

Contrary to Ford’s rightwing ideology that claims to reduce costs, his privatization agenda is increasing costs, as hospitals are now spending millions on temp agencies to make up for the staffing shortage created by wage suppression. As ICU nurse and decent work advocate Birgit Umaigba recently tweeted, “Instead of conserving hard-earned taxpayer dollars, the conservative government is spending millions on private agencies while keeping Bill 124 (a wage suppression legislation) in place to drive nurses/PSWs out of our publicly-funded health system.”

Inflation and the fight for higher wages

Rising inflation has spurred workers into action across Canada, with the number of strikes and workers involved in strikes set to be amongst the highest in the last two decades. The vast majority of these strikes are taking place in the private sector. But workers in the public sector are equally feeling the pinch.

This summer education workers with the CUPE Ontario School Boards Council of Unions (OSBCU) entered their bargaining demanding an annual 11.7 percent pay increase, $3.25 a year raise each year over four years. This bargaining position runs counter to the dictates of Bill 124. The government countered by offering a paltry 2 percent a year increase for education workers making less than $40,000 a year (and 1.25 percent for those making above $40,000 a year).  The government’s counter is insulting and amounts to an effective wage cut of 9 to 11 percent over four years. Over the last decade education workers wages in Ontario were cut in real terms by more than 11 percent via legislated wage freezes and restrictions on wage increases.

But what is significant about the government’s counter is that it itself moves beyond the framework of Bill 124, offering wages beyond 1 percent. The sustained high inflation has made it politically untenable for the Conservatives to defend Bill 124’s capping of wages for public sector workers at 1 percent while inflation is at 8 percent. And you can already see the government’s position wilting at the edges.

With Bill 124 set to expire for some workers in March 2023 (the bill has a three year moderation period for represented employees that takes effect the day after a collective agreement in force on June 5, 2019 expire) there is a temptation for some labour leaders to let the legislation slip quietly into the night. The strategy is about not provoking government attacks. This strategy will not work and can profoundly demoralize workers by lowering expectations. It also misses how the cost of living crisis is creating openings to push for higher wages. All workers, both private sector and public sector and union and non-union, understand the need to keep up with the rising cost of living. When it comes to Bill 124 the Tories can evade, stall and create exceptions, but they can’t defend it.

There is an opportunity to create a crisis for the Tories right at the start of their second term. It would be wise to not let it slip. If unions put forward aggressive demands for wages in the public sector it will force the government into a position it does not want to be in. It will shift the needle, as the OBSCU position already has.

There is a cost of living crisis happening in the province right now. The direction this crisis takes will depend on how unions and the broader working class help shape an alternative. With the economy set to slow down (and inflation likely curbing), the banks, big business and the government will blame workers for the crisis and look again to put the brakes on public sector spending. In 2023 we could be in a recession and inflation could recede a little, meaning it would be harder to fight for higher wages.

Unions have an opportunity to put the Tories on their back foot and break the back of Bill 124. This can unite workers across sectors, and push back on the broader privatization agenda. The time is now to build the confidence of workers to take on the Tories and fight for higher wages.