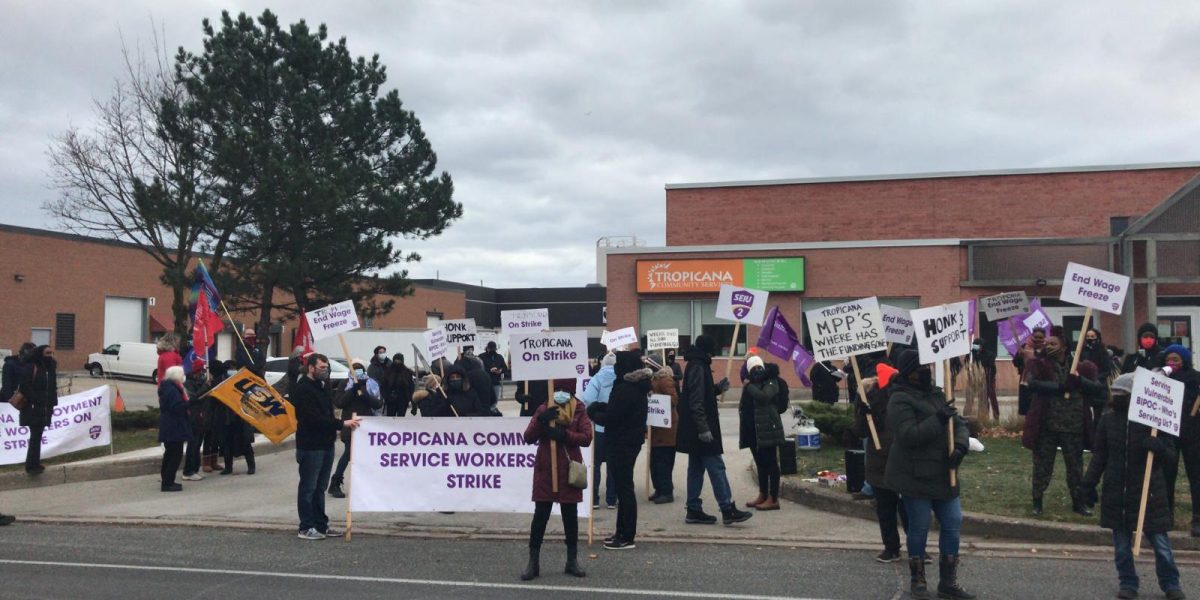 Striking workers at Tropicana Community Services, represented by SEIU Local 2, are drawing on their vast community support as the employer refuses to bargain with them. This past Saturday, November 21, members of the Scarborough communities—including the Coalition of Black Trade Unionists and SEIU Local 1 Healthcare workers—showed their appreciation for Tropicana workers with a rally highlighting the longstanding dedication to their work with over 30 years of collective experience.

Many took to the mic to tell the crowd about just how much Tropicana Community Services and their workers have meant to the community and particularly its youth. Current and past Tropicana employees addressed the rally, outlining their own journeys from service recipients at Tropicana to service providers both at this center and others. Yet, this past year saw over a third of employees—the majority of whom are black women—leaving the organization due to chronic low wages and an increasingly hostile work environment ushered in by a new board of directors.

Tropicana Community Services is a non-profit community organization in Scarborough and a United Way agent, which started as a local initiative in 1980. The programming ranges from counselling, settlement services, childcare, education, personal development, and employment services, and more. Its focus on the Caribbean, Black and African communities of Toronto reflects the surrounding Scarborough residents. The women and men on the front lines of this organization belong to the same communities they service. Tropicana’s workers fill in gaps produced by a long history of political, social, and economic neglect of these communities in Canada.

Scarborough’s residents make up the GTA’s frontline workers facing COVID-19. But due to years of privatization in education and healthcare, cutbacks in social services, as well as a long-standing housing crisis, they are one of Toronto’s hardest hit communities by the pandemic. Despite the added hardship of COVID-19 and after one last failed attempt to negotiate a fair contract, Tropicana workers began their strike on November 9. While Tropicana’s messaging is all about serving disadvantaged youth and their families, particularly those from Caribbean, Black and African heritage, these values have not been upheld in the treatment of Tropicana’s employees.

We spoke to Dominique, who started working at Tropicana in 2008 as contract staff while pursuing her undergraduate degree and continued to work at Tropicana for 10 years, leaving only in 2018. Dominique commented on her decision ultimately to leave: “I knew that I could make more money, but I was dedicated. However, I have a family, a daughter and a mother that I have to take care of, I am the breadwinner. When the Tropicana board changed in 2018, shifting from workers to corporate people, it became a toxic environment. No money, and now no family feeling, so I left”.

As a social justice, non-profit community organization, Tropicana Community Services receives funding from both the provincial and municipal governments. The non-profit sector in Ontario, and in particular the community sector, has long been plagued with low wages, little to no benefits, temporary employment and general precarity for workers in comparison with public sector work. As a 2014 study found, “because there are very limited detailed surveys of the nonprofit sector it is difficult to get precise information of the wage/salary levels and other working conditions in the NPSS [Non-Profit Social Services]”, revealing that “the compensation levels stand considerably below public sector employers and in many cases the most temporary workers receive wages only modestly above minimum wage. Stagnate [sic] wages/salaries in the NPSS due to years of flat lined funding is causing significant financial hardship for non-profit employees.”

Striking Tropicana workers highlight this gap within public sector employment in Ontario, revealing the gulf between them and others in the sector. In particular, when non-profit community service providers appear in racialized/marginalized regions of the GTA, they are systemically underfunded. Echoing others at the rally, Dominique noted how agencies and community service organizations with similar funding across the GTA offer their workers upwards of $5000-7000 more per year. At Tropicana, workers are expected to provide the same level of service with fewer staff and significantly less pay, while the new corporate board gave themselves bonuses.

Tropicana’s board of directors consists largely of former corporate executives like President Carol Comissiong, a former CFO at IBM Canada who worked in financial planning and business operations, as well as Vice-President Anthony Grey, a former business manager with experience in American Express and Royal Bank of Canada, among others. With changes made to the leadership of the organization, including an all new board in 2018, it seems a shift to corporate over community interests is becoming clear. Many long-term employees felt that Tropicana’s public message did not align with their treatment at work.

In a twitter post on November 9, Tropicana management tried to drive a wedge between the workers and the community, stating “We’re disappointed the unionized employees of Tropicana Community Services have elected to strike. Tropicana intends to continue operating all our programs & services safely & securely during this labour disruption. The community’s needs are too important to simply shut down.” By “continue operating” they mean using strike breakers for childcare services during the strike, which undermines the needs of workers and the community.

As Stacey and Karen, employees at Tropicana’s childcare services, told us: “When we are working with the kids in the community, we treat them as our own. And it shows in the kids, they love us. Bringing in new people every few days into the daycare will affect the children negatively.” Building special bonds with children in childcare centers takes time, effort, and individual approach. Stacey and Karen explained that the care work they provide at Tropicana blurs the superficial boundaries between work and family. Even before the pandemic, Tropicana workers—also mothers and grandmothers who are dedicated to the kids and families in their community—worked overtime due to understaffing in the childcare center. During COVID-19, as other frontline workers in Ontario know, the amount of care work they perform has increased due to the added cleaning, sanitation, and social distancing measures. With no extra staff, these women bear the brunt of lack of adequate resources and supports, as well as subsidizing their employers’ bonus cheques.

Conveniently, the employer has attempted to invoke Bill 124—legislation that calls for further austerity by the Ontario government—which caps public sector wage increases to 1% for public employees, including those in the community service sector. Long before Bill 124 was passed, Tropicana’s employees experienced a 15 year wage freeze. In the context of rising standards of living across the GTA—including lack of affordable housing and food—a wage freeze represents a steep wage cut, a process increasing the immiseration of working people in Canada, along racialized and gendered lines.

Toronto’s marginalized and racialized communities rely heavily on services like those at Tropicana. These striking workers are doing the hard work of ensuring their community is properly resourced, well-staffed and fairly compensated for the work they do. As Jill Andrew, MPP and member of the NDP Black Caucus, said at the November 19 rally outside Queen’s Park, “As a child, Tropicana was my second home—I am honoured to stand alongside you all in your fight for workers’ rights, for improved wages, and for a healthy and safe work environment where you can walk in and out with your dignity intact.”

If Tropicana Community Services wants to be true to its message, it must look inward and realize that the heart of this organization as well as its face is out on the picket lines, asking for dignity and respect through fair compensation and a good contract. Emphasizing that this dispute is not only about present demands, but also the future of the community, Stacey and Karen left us with a powerful statement: “we are on strike for the next generation. You can’t have someone ruling over you just because they are up there, wearing a suit”.