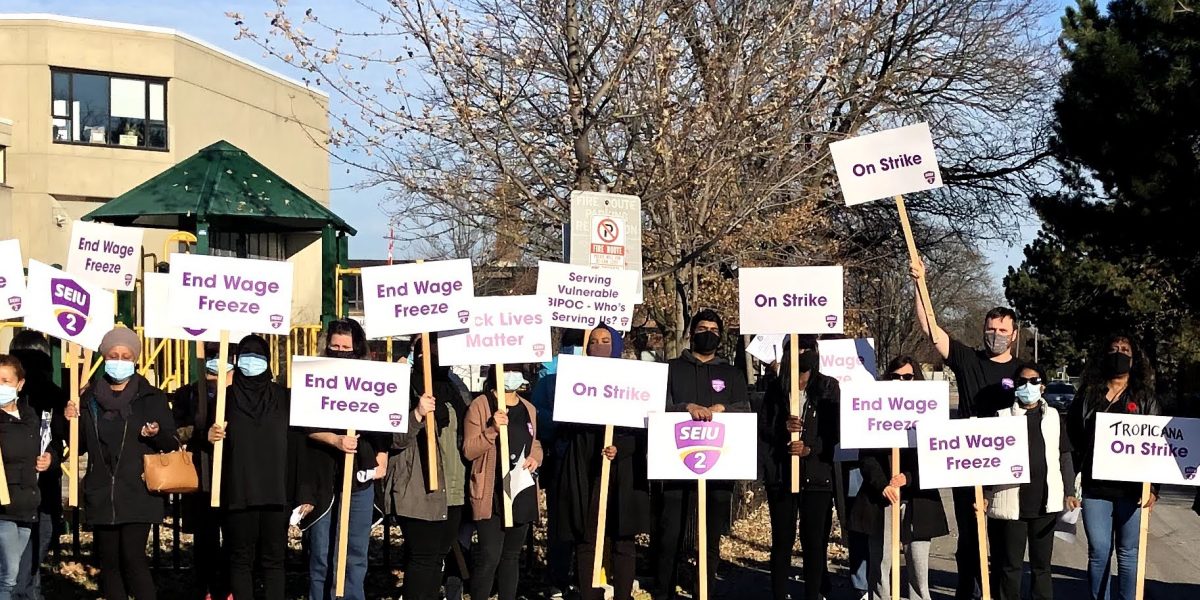 Tropicana Community Services in Scarborough has been serving Caribbean, Black, and African communities in Scarborough for 40 years. Workers there have been on strike for fair wages and fair treatment since November 9.

Sylvia Waldron has worked at Tropicana for 30 years, and says that frontline workers “have been committed and dedicated to this organization from the ground up… We know where Tropicana came from and how it reached this point.”

After enduring a 15-year wage freeze in a city where the cost of living has skyrocketed, workers unionized in July 2019 to negotiate a fair contract. Bargaining started a month later. According to SEIU Local 2, which represents the workers, as soon as the employer came to the table, their focus was on concessions. They wanted to take away float days and paid holidays that had been part of company policy for years.

Laxy Saunthararajan, an organizer from SEIU Local 2 who has been working closely with Tropicana workers, added that the organization “lost about 32 people over the last year alone because people couldn’t take the chronic abuse financially and emotionally from management.”

Looming over this strike is Bill 124, which caps provincial public employee wages at 1%, including those working for organizations that receive over $1 million in funding from the Ontario government. This bill is part of the Ford government’s systematic attack on public services, the brutal consequences of which were already being felt before the COVID-19 pandemic, and have since become disastrous.

Government funding for Tropicana has steadily decreased over the past five years under both Liberal and Conservative governments. As Brian Champ notes, “the Ontario government’s Trillium foundation total grant money was cut by $15 million in 2019, a cut of 9.4% to this lifeline of support for community programs and services.”

However, Tropicana management is refusing a 1% wage increase for its workers, even as it has gained funding from other sources, given a bonus to its management team, and is helmed by an ED making a six-figure salary. Saunthararajan points out, “Tropicana has a great image because it’s been the workers’ blood sweat and tears that brought that great image forward… they’re gaining funds based on that but not giving back to these same workers who got them that money in the first place.”

These workers aren’t only fighting back against bad bosses, they’re taking a stand against the deepening devaluation of care work and the systemic inequities facing racialized workers when it comes to safe and decent work. In a climate where strike actions necessitate added amounts of courage and sacrifice from those undertaking them, solidarity is more important than ever.

Here is how you can support the striking Tropicana workers: