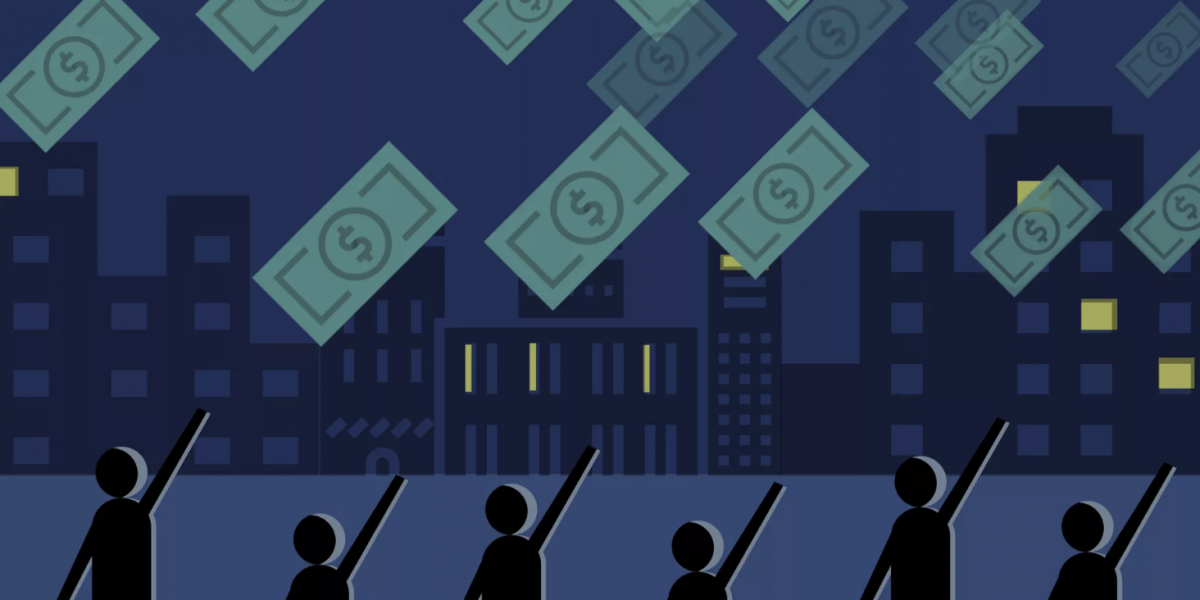 As the economic crisis deepens in the wake of the COVID-19 pandemic many are looking for solutions. The immediate and serious challenges faced by workers has caused some to see Universal Basic Income (UBI) as a potential policy to address the crisis. The idea of providing people with adequate income supports is a completely understandable response when millions are facing unprecedented financial hardship. Governments are dolling out billions in bid to solve the crisis, so why not institute a UBI? But before we jump lockstep behind the idea of advocating for UBI, it is worth taking a harder look at this policy that claims it is neither right nor left, but above the ideological fray. Pushing UBI as a solution to the capitalist crisis would have serious negative consequences for the working class. UBI seeks to sustain the capitalist system while opening the door to the right to rollback public services and attack workers’ rights. Over the coming months Spring Magazine will be publishing more analysis about UBI. In the meantime we offer up this critical reading list as a resource to learn more about the potential pitfalls of UBI.

The Pandemic and Basic Income

Basic income is on the table in Canada. Is it the fight we want? by Dan Darrah

The Politics of Basic Income

Universal Basic Income: reasons to be cheerful or no go central? by Ellen Clifford and Mark Dunk

The Basic Income Illusion by Alex Gourevitch and Lucas Stanczyk

Bread and Roses: Beyond a Basic Income by Mary-Dan Johnston

Basic Income and the Left: Political and economic problems by David Bush

Basic Income as a Neoliberal Weapon by John Clarke

Basic Income: Libertarian wedge or a plank towards a socialist future by Christo Aivalis

Who wants a universal basic income? by Leigh Phillips

How progressive is a basic income? left and labour perspectives by Toby Sanger

The Conversation About Basic Income is a Mess. Here’s How to Make Sense of It by Yves Smith

The False Promise of Universal Basic Income by Alyssa Battistoni

Basic Income: A Sellout of the American Dream by David H. Freedman

Universal Basic Income: A Capitalist Fix to the Evils of Capitalism? by Esteban Mercatante

With friends like theses, who needs the UBI? by Eric Pelkey

The Economics of Basic Income

A policy maker’s guide to Basic Income by David MacDonald

Basic income – too basic, not radical enough by Michael Roberts

Universal Basic Income May Sound Attractive But, If It Occurred, Would Likelier Increase Poverty Than Reduce It by Robert Greenstein

The UBI Bait and Switch by Matt Bruenig, Antti Jauhiainen, and Joona-Hermanni Mäkinen

Even in Finland, universal basic income is too good to be true by Declan Gaffney

Why Basic Income Failed in Finland by Jimmy O’Donnell

History and Labour of Basic Income

The Failure of a Past Basic Income Guarantee, the Speenhamland System by Yves Smith

Guaranteed Annual Income: Is This Really What We Want? by Jean Swanson

Automation and the Basic Income: Beyond the hype by David Bush

If robots took our jobs, could they do them? by Joseph Choonara

The Great Tech Panic: Robots Won’t Take All Our Jobs by James Surowiecki

High Tech, Low Growth: Robots and the Future of Work by Kim Moody

Automation and the future of work by Aaron Benanav

Robots and AI: utopia or dystopia? by Michael Roberts

Into the digital void? by Martin Upchurch

Automation: will robots take our jobs? by David Bush