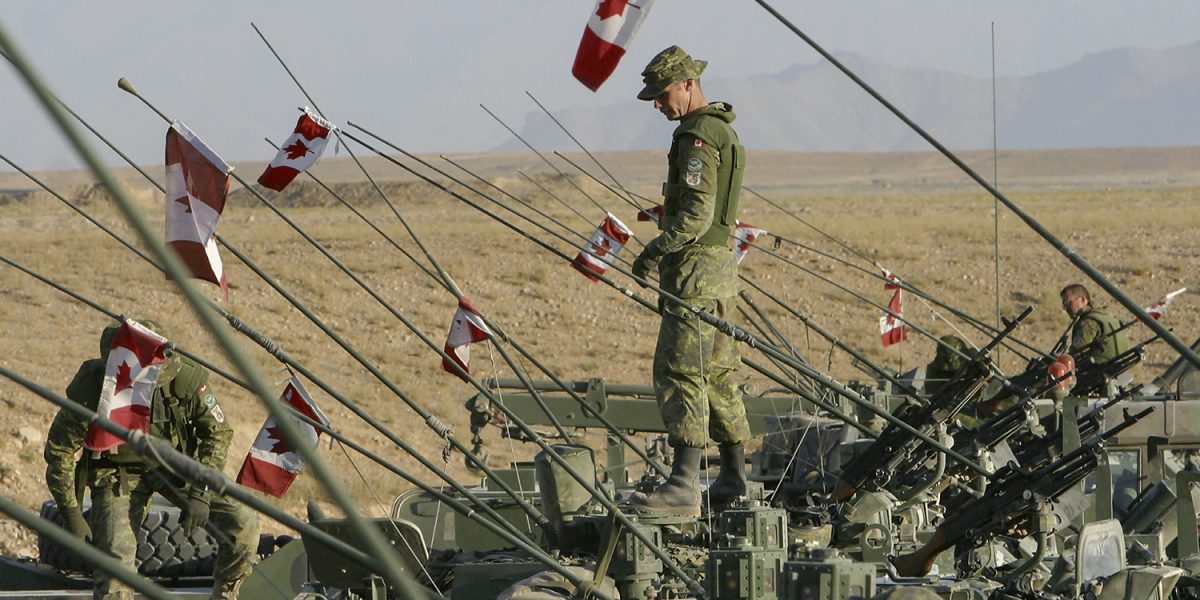 The quick collapse of the Western-backed government in Afghanistan has revealed how little ordinary people should trust Canada’s military, arms industry and associated ideological supporters. The reasons presented for Canada’s war in Afghanistan were to fight fundamentalists, build democracy and support women’s rights. But these justifications for war, their claims of progress and then victory have proven to be no more than propaganda and lies.

As Afghan women’s rights and pro-democracy activist Malalai Joya summarized, “The Americans replaced the barbaric regime of the Taliban with the brutal warlords, and then began to negotiate with the Taliban, even though the nature of the Taliban has never changed. The Americans have thrown bombs, polluted the environment, made the system even more corrupt. They have never been interested in the Afghan people.” The same could be said of Canada’s record in Afghanistan.

In Canada’s biggest military deployment since World War II, more than 40,000 Canadian troops fought in Afghanistan between 2001 and 2014, at cost of $20 billion. The result: over 200,000 Afghan civilians and combatants were killed in two decades of fighting.

As I detailed recently, Canada engaged in significant violence and war crimes in the central Asian country. This included bombing raids with chemical weapons, patrols that killed civilians, and night-time assassination raids where a JTF2 member said he felt his commanders “encouraged” them to commit war crimes. As Chief of the Defence Staff Rick Hillier infamously proclaimed: “we’re not the public service of Canada, we’re not just another department. We are the Canadian Forces, and our job is to be able to kill people.” Canada also transferred Afghan detainees over to the repressive Afghan regime for torture—including beatings, whippings, rape, and the use of electricity, knives and flames. As Maclean’s reported in 2006, General Rick Hillier had “enormous respect for the warlords.”

This was not a well-intentioned war whose mission went astray or whose execution was mishandled. Canada’s record in Afghanistan mirrored its other military operations, from Haiti to Libya.

Just before Canada ramped up its fighting in Kandahar in 2006 Canadian troops invaded Haiti to overthrow the elected government. Five hundred Canadian soldiers backed violent rebels — Haiti’s Taliban, if you like — who employed rape as a means of political control. A study in the prestigious Lancet medical journal revealed there were 35,000 rapes in the Port-au-Prince area in the 22 months after the overthrow of the elected government. So much for advancing women’s rights.

The other supposed motivation for the invasion and occupation of Afghanistan was to weaken Al Qaeda. As Canadian troops wound down their occupation of Afghanistan a half dozen Canadian fighter jets bombed Libya. During the bombing, noted Ottawa Citizen military reporter David Pugliese, Canadian air force members privately joked they were part of “al-Qaida’s air force”. Lo and behold, these were the major beneficiaries of the war, taking control of significant portions of the country.

If fighting extremists, building democracy and defending women’s rights were not Canada’s main objectives in Afghanistan, what was?

Corporations made a killing

Military service contractors such as SNC Lavalin and ATCO expanded their involvement with the Canadian Forces. During the war in Afghanistan Canadian Commercial Corporation president Marc Whittingham wrote in the Hill Times, “there is no better trade show for defence equipment than a military mission.” The crown corporation has expanded its role in the international weapons trade.

On Monday The Intercept reported that the stock price of the top five US arms firms rose 10-fold after US President George W. Bush signed the Authorization for Use of Military Force on September 18, 2001. Boeing, Raytheon, Lockheed Martin, Northrop Grumman and General Dynamics all have Canadian subsidiaries. The US-based firms are not simply branch plants. They do research in Canada, have offices near Parliament Hill and hire former top Canadian military officials. A number of them do international business through their Canadian divisions. General Dynamics Canada, for instance, has the largest ever Canadian export contract selling Light Armoured Vehicles to Saudi Arabia. Tracing its Canadian history to 1948, General Dynamics has ties to Canadian educational institutions, politicians and the military.

Private security firms also did well in Afghanistan. Conflict in that country helped propel Montréal’s Garda to become the biggest privately held security firm in the world with some 80,000 employees.

The military saw the conflict in Afghanistan as a way to increase its profile. There was a surge of martial patriotism in Canada with initiatives such as Highway of Heroes and Project Hero. While the Canadian military abandoned veterans with PTSD, by the mid-2000s every province adopted a special licence plate to signify the driver is a veteran. This was then used to demand more war. As all but Canadian special forces had been withdrawn from Afghanistan in 2012, the Chief of the Defence Staff publicly demanded a new war. “We have some men and women who have had two, three and four tours and what they’re telling me is ‘Sir, we’ve got that bumper sticker. Can we go somewhere else now?’” General Walter Natynczyk told Canadian Press in 2012. “You also have the young sailors, soldiers, airmen and women who have just finished basic training and they want to go somewhere and in their minds it was going to be Afghanistan. So, if not Afghanistan, where’s it going to be?”

Various think tanks and militarist organization such as the Conference of Defense Associations as well as academics writing on military issues benefited from millions of dollars in public funds. The war justified an increase in the size of the military and a major spike in military spending. This also produced a surge in Islamophobia and attacks on civil liberties. Former Canadian Prime Minster Stephen Harper declared that the biggest threat to Canada was “Islamicism”—which justified secret trials and deportation to torture, and domestic surveillance, and state-sanctioned Islamophobia continues to fuel attacks on Muslim communities.

But in 2003 people across Canada saw that the biggest threat was war on Iraq, and a mass movement stopped the Canadian government from directly participating. This anti-war success was a major problem for Canadian elites. As The Unexpected War: Canada In Kandahar explains, “The political problem, of course, was how to support Washington in its war on terror without supporting the war in Iraq. The answer to the problem was the so-called ‘Afghan solution’.” Former Foreign Affairs Minister Bill Graham explained “there was no question, every time we talked about the Afghan mission, it gave us cover for not going to Iraq.”

The war in Afghanistan was good for the arms industry. It also bolstered the Canadian military, and helped it recover from its setback in Iraq. But the quick unraveling of 20-years of war and occupation ought to sap some of the power of Canada’s military, arms companies and associated ideological institutions. The quick collapse of the US- and Canadian-backed Afghan military and government proves they should not be trusted. Their primary goal is, and always has been, to benefit the military-industrial complex, not to improve the lives of people in other countries.

Former Liberal leader Michael Ignatieff once claimed that for Afghans, “their best hope of freedom lies in a temporary experience of imperial rule.” But the past 20 years in Afghanistan show that imperial rule is never temporary and never leads to freedom, and that the best hope lies in challenging imperialism and supporting self-determination. As Malalai Joya explained, “No democracy arises from a military occupation.”