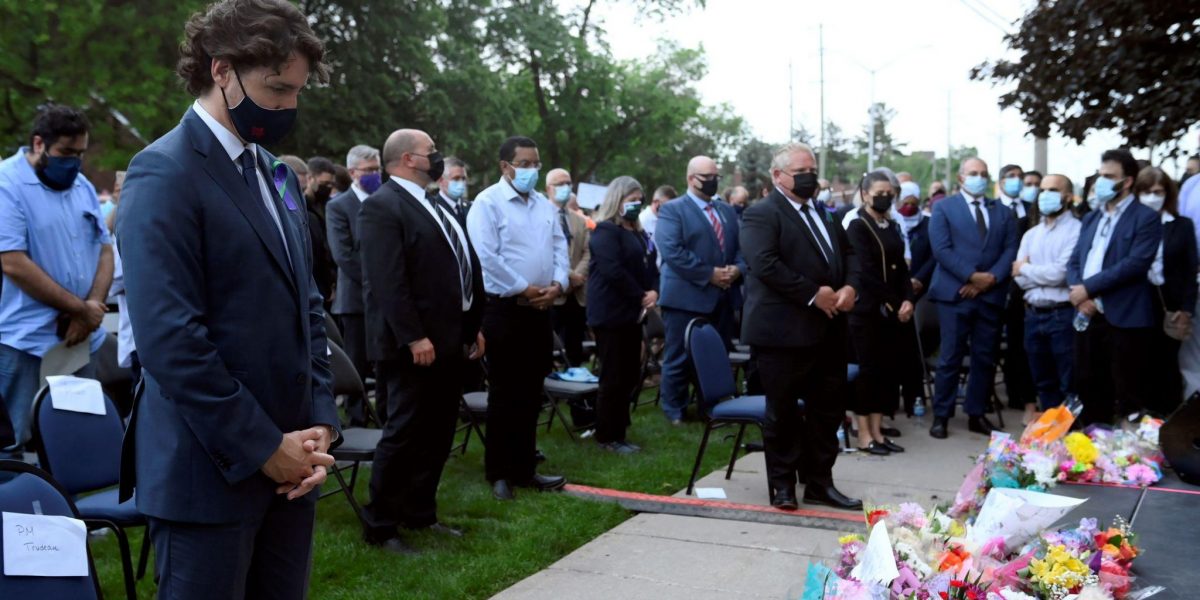 On the night of June 6 in London, ON a small Muslim family was torn apart as a violent white supremacist plotted a fatal attack against them. As a result, a little boy of 9 years old has lost his Mother, Father, Grandmother, and Sister. Beyond that, people of colour are reminded of how little humanity this country affords them. In such a time of intense grief and distress, politicians, at the federal, provincial, and municipal levels have taken it upon themselves to exploit the Muslim community’s effort to engage in collective healing.

These events are our way to pray for the souls of the family and remove the fear and anger out of our hearts. As the MC at the London event put it, “this event is chiefly by, and for our community, for our collective grief and our collective support.”

The members of the London Muslim Mosque pushed their needs aside to ensure we had a place to grieve and bring solace to one another. Rather than centring the family and the local Muslim community, politicians used this forum to declare the same hollow statements over and over again.

Islamophobia and racism are intertwined

The Canadian state aims to ensure capitalist profits in part by engaging in settler-colonialism at home and imperial policies abroad. In this context, we are referring to imperialist interests in the ‘Middle East,’ also expanding to the greater ‘Muslim World.’

States in the Global North, such as Canada, are able to devastate our communities through fear-mongering; brown bodies must be dehumanized in order for these acts to be justifiable. This is historically seen through the creation of Orientalism. It cannot be denied that there is an inherent link between the ‘Middle East,’ brown bodies, and their association with Western interpretations of Islam. This link ensures there is a lack of distinction between these individual identities for them to fit into one racist ideology.

This act of violence against a Muslim Pakistani family cannot be interpreted as solely an Islamophobic attack. The distinct process of racialization that comes with being Pakistani is inseparable from the white supremacists’ Islamophobia. This factor was continuously overlooked as each politician took to the stage to denounce this form of violence. Imperialist violence has intrinsically linked racist ideologies to the religion of Islam.

Canada’s racist foundation, coupled with the ongoing dehumanization and violence against BIPOC and Muslim peoples, is what reinforces white supremacy and creates the conditions for white supremacist violence. Far from disillusioned lone individuals committing heinous acts of violence, these violent individuals are a direct result of the imperialism and settler-colonialism of the Canadian state.

Each political leader who arrived at that event works within the violent systems that harm BIPOC communities on a national and global scale.

Out of all of these politicians, Justin Trudeau’s presence and speech were one of the most unsettling. Since his election in 2015, Trudeau has continuously provided many BIPOC communities with empty words and broken promises. Trudeau continues to be an active participant in the oppression of Muslims, specifically in the Global South. On June 13, Trudeau posted a tweet congratulating the newly formed Israeli government and Prime Minister, Naftali Bennett, who has publicly expressed his support for the killing and displacement of Arab and Palestinian peoples, many of which are Muslim.

This tweet was released a mere five days after Trudeau shared an intimate and vulnerable space in the Muslim community; a place where he was met with genuine love and praise. This is in addition to Trudeau’s ongoing support of selling military arms to regimes that commit human rights violations against brown and Muslim bodies, such as profiting off Saudi Arabia’s continued violence towards Yemeni people.

Prior to the family’s death, Trudeau shamelessly wished Muslims a happy Eid, while also failing to listen to Singh’s calls to cease arms sales to Israel.

There cannot be a separation of care and support for Muslim bodies when the label “Canadian” is attached to their identity. Imperialist violence against Muslims, in this context by the Canadian state, only breeds an Islamophobic and white supremacist cultural fabric.

The role of respectability politics

As a community where many of us are immigrants and want to create a good life for ourselves and our families, we tend to fall into the trap of respectability politics. There were countless moments where Friday, or even Eid, prayer was interrupted because a politician or police chief felt the need to take space and state hollow sentiments. It is disheartening to see our communities fall into this trap where public figures will say pleasant things yet actively commit harm against us.

The Canadian state will not save us from Islamophobia or any form of hate. If we truly want liberation that will allow us to practice our religion and live without worry of violence, we need to protect our spaces and demand proper change through collective action. We cannot allow these craven politicians to diminish the sacredness of our masjids or disrupt our efforts for community healing. We never needed them and never will. Let their empty words be a reminder that respectability politics will never save us from their violence.