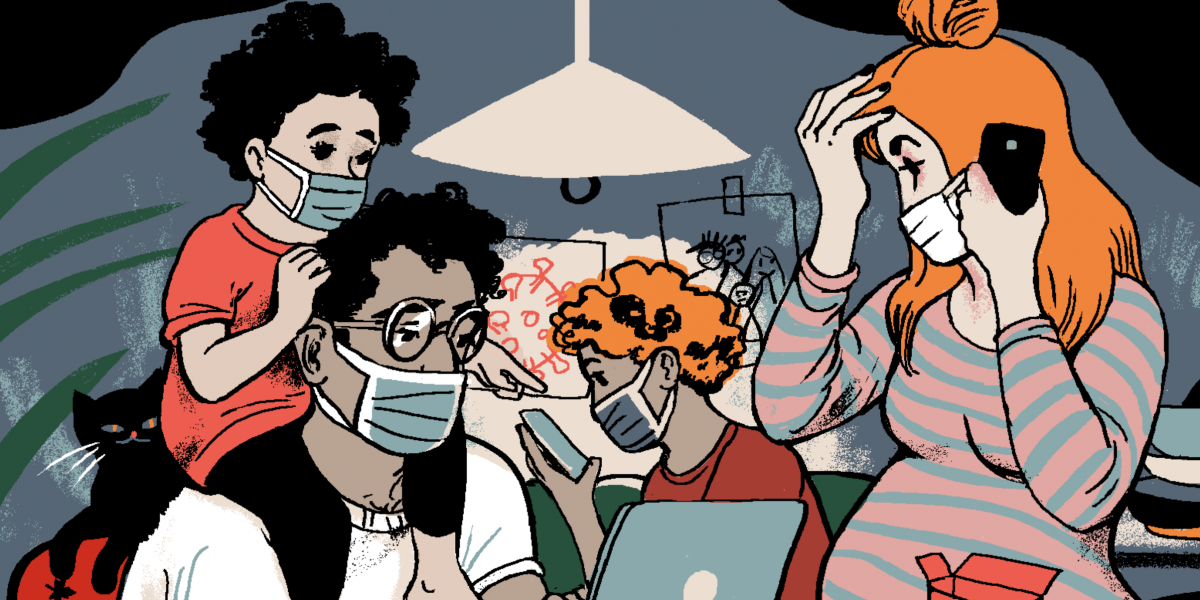 While the economic fallout from COVID-19 continues, my partner and I are privileged enough to continue working from the safety of our home. This involves toggling back and forth throughout the day between Zoom meetings, crayons, whitepapers, tantrums, slide decks, lego, spreadsheets, episodes of Wild Kratts, etc. In this mix is a precocious five year old who finds himself sometimes struggling for the attention of his parents, and feels diminished when it’s not afforded to him. His parents feel diminished too. Remaining productive while sequestered with family takes a lot of work, but so does caring for family while remaining productive. At the end of most days we feel that we’ve failed at one, or both.

We’re not alone. In my conversations with friends and family I repeatedly bumped into daily struggles resulting from the collapse of “work” and “life” into one another. Like us they are middle-income white collar workers, with job descriptions far removed from anything ‘essential.’ I was keen to hear more, especially from those who are working remotely while caring for family. So I began inviting them to talk about this collapse in more detail.

These conversations gave no glimpse of the deathly precariousness of workers in the manufacturing and service sectors who have been striking for safe working conditions. What they revealed, instead, was a creeping realization that the privileges of salaried white collar work are short-lived in the face of this economic fallout; that such work is also expendable, as some 25% of my coworkers found out last week. My friends and family are also realizing the quarantine is not a temporary break with their world, but perhaps a prelude to another world: one where work and life remain collapsed while our obligations still assume that they are separated. This contradiction risks eventually magnifying their daily struggles into downward mobility, exposing us to its milestones along the way (depression, defaults, demotions…). And so I found that while the everyday lives of my friends and family are at a standstill, their thinking about the future of “work” and “life” is in motion.

Such thinking invites possibility. It might conclude in an embrace of right-wing politics, with invocations of ‘family’ and ‘nation’ as values under siege. But it may also conclude in demands for a progressive future. This is a future in which workers are not coerced into weighing their financial stability against the risk of infection, the capacity of our healthcare system is not compromised by the principles of lean management, and our social rights are not gutted by austerity to offset emergency deficit spending today. Securing this future requires contesting the broader conditions of a “return to work,” implicating both salaried and precarious workers in a larger collective: a working class, with shared interests.

A glimpse of the daily anxieties and hardships that I heard in these conversations can shed light on what might motivate salaried workers toward such a larger collective. Perhaps it can even evoke the solidarity necessary for a collective struggle toward that progessive future.

“It reflected badly on me”

Ayla is the only member of her department with an infant at home. Like all of the working couples with whom I spoke, she takes turns with her partner in caring for the child; sometimes planning ahead, sometimes haggling in the morning. Unlike many, however, her employer was skeptical about the need for work-from-home protocols. “They think we’ll slack off,” she says, before going on to explain how managers initially monitored them. “I know they were checking our online availability to see if we were working or not…which, for me, wasn’t always easy to maintain because of Sophia (her daughter). It reflected badly on me.”

The fear of being perceived as unproductive rings loudly in these conversations. There is the immediate risk of being let go as our employers try to stem the costs of lost business. This is intensified with recurring news about layoffs and, for many of us, the prospect of servicing outsized household debt. If this risk is realized, we can also look forward to the vertigo-inducing task of finding another job when the numbers of applicants are expanding and the number of openings dwindling. “I thought about it a lot in the first couple of weeks. I had trouble sleeping, I still do…we just bought a house and our mortgage is way more expensive than our rent was,”Ayla said. Sure enough, her employer slashed the size of its workforce. She was retained.

Ayla’s concerns about management’s paranoia are not misplaced. Since the widespread onset of work-from-home protocols, reports are emerging of an uptick in corporate demand for work surveillance technologies. Auditing our mouse clicks and keyboard strokes, the thinking goes, is a great way to ensure we remain motivated. Labour activists know such practices by a different name: “management-by-stress.” This idea of quantifying a worker’s value by tracking little actions and their tempo is not new. It extends from the principles of “scientific management” introduced by Frederick Taylor in the early 1900s. It’s not a fringe service either. The global market of so-called “user activity monitoring,” as it’s formally known, was estimated at just over US $1 billion in 2018. Ayla gives voice to what may fast become a common anxiety, among white collar workers, about the growing embrace of this digital Taylorism by employers. If the risk of staff turnover had been a deterrent to the adoption of such technology, a new recession and the increasingly bleak job market accompanying it may change that.

For now, Ayla takes pains to keep up her online activity and perform the norms of professionalism while on screen during presentations to client or senior management. Being “professional” at a time of collective separation becomes a matter demonstrating presence, which signals productivity. But its norms assume separation from the clamour of children, the clickity-clank of an old dishwasher, or a half-naked partner walking through the frame.

The upkeep of professionalism in the midst of domestic distractions is more fraught for women. For one thing, the patriarchal logic that imagines women as naturally inclined toward child-rearing affords Ayla little room for manoeuvre when Sophia acts out. “I was trying to move a matter forward with an external partner,” she recalls, “when (Sophia) started slapping the laptop. She wanted to close it. I couldn’t stop her and began yelling at her, I had to…you might’ve thought I was hitting my child.” Being stern with Sophia might imply that she’s uncaring for putting her work before her motherly duty. Being available to Sophia might imply that she’s unprofessional for putting her child before her client presentation.

For another, this patriarchal logic extends to the home. Everyone in my ad hoc sample noted their efforts to equally share daily care work with their partners (cleaning, home-schooling, cooking, playing, consoling…). Like my wife and I, they’ve all divided the day into rotating shifts. Pointing this out, however, underlines that equally sharing care work runs counter to prevailing gender norms. My sample, in other words, doesn’t scale. Women, white collar or not, were already disproportionately burdened with the “second shift” prior to the pandemic. This is the unpaid care work that is performed in addition to paid work, and neglected in official conceptions of “work.” So it shouldn’t surprise us to learn that recent surveys find women report feeling more disrupted by pandemic life.

David recounts the early days of the quarantine with fondness. “It was limbo, so we didn’t really care much. ‘You want to play video games for eight hours?’,” referring to a conversation with his five year old son, one of two children, “‘Sure, why not?’” But things soon changed. His paid workload has increased. A higher volume of meetings compensate for the loss of impromptu collaboration, new projects stall in games of “broken telephone,” and work requiring sustained focus drags on for being constantly interrupted. His unpaid workload has also increased. Home-schooling children requires sustained focus as well, and the unavailability of grandparents and friends mean that he is effectively half of his children’s social life. These competing obligations have left him physically and morally exhausted. “There’s no elegant victory, no matter what you do you can’t win. You either ignore your kids, or ignore your work,” he pauses, “Which in either case, you feel shitty about it.”

David’s everyday life, like my own, was dependent on the care work of others. These include the elementary teachers, for example, who provided the education and social interactions his children need to grow; that he needs so as not to “feel shitty” as a parent. Despite his physical exhaustion and feelings of guilt, David isn’t keen on quickly recovering that everyday life. Like everyone else I spoke with, he’s concerned about safety. Whether it’s a concentration of bodies in a classroom or a streetcar, he wonders about the risk of infection and the ways this risk might travel through his relationships; perhaps finding his immunocompromised father. The shared thinking here is the collapse of “work” and “life” ought to be redressed, but not in ways that expose us and our families to harm.

Solidarity, not fear and guilt

David’s concerns necessarily point to the working conditions of others, like teachers and streetcar operators. Securing their working conditions against the risk of infection also diminishes this risk to himself and his relationships is a matter of health and safety. The revisions to working conditions that it requires, however, open the way to a revision of other things. Among them are the power relations between workers and their employers, the gender norms that neglect care work as “work,” much less “essential work.” The contestations of health and safety, in other words, invites a collective struggle over the general conditions of an eventual “return to work.”

Such a struggle is what feminists have referred to as “boundary struggles,” which contest the broader arrangements that structure our everyday life between the capitalist imperative to secure an income and the social bonds that sustain that life and give it meaning. A “return to work” that restores the norms and inequalities which elevated “work” above “life” is actually a regression. The crisis of COVID-19 has brought with it the scale and stories that point to this boundary. Without contesting it, a ‘”return to work” will be borne of fear and guilt; like Ayla’s fear of failing to keep up with mortgage payments if she loses her job, and David’s guilt about ignoring his children.

The only way to avoid this is by finding each other as members of a working class, in the face of shared risks, with the common goal of collective struggle toward that progressive future.