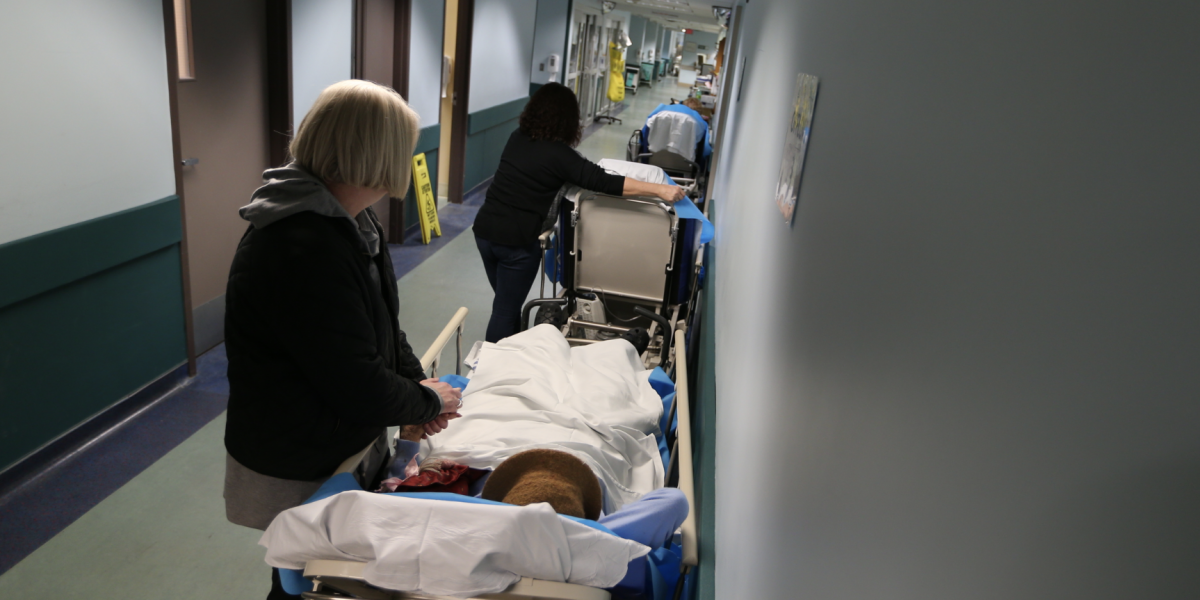 Two emergency orders by Ontario’s Ministry of Health and Long-Term Care have outlined temporary measures that administrators of hospitals and nursing homes may utilize to ensure there are enough workers available to allow for undisrupted operations over the coming two weeks. As COVID-19 threatens to swamp Ontario’s healthcare system, the Ontario government is only now beginning to realize what healthcare workers have been saying for years: that increasing the physical capacity of emergency rooms and building new wards, especially in moments of crisis, require levels of staffing most institutions lack. Unless these deficits are addressed, hospitals and nursing homes will not be able to absorb the inevitable uptick of patients who require treatment. To this end, the urgency of the orders makes complete sense.

However, the scramble to marshal human resources in this moment is also an indictment of the ways current and past governments have restructured capacity and staffing at hospitals and nursing homes throughout the province. It is important to remember that, prior to the COVID-19 pandemic, patients were already being held in hallways, emergency rooms, and other empty spaces for days at a time, to say nothing of other aspects of the health care system.

In other words, healthcare workers have long been warning that Ontario’s healthcare system is at a breaking point, and that any additional stress could push it closer to collapse.

Hospital and nursing home workers have been calling for increases to staffing levels for over two decades, as part of their resistance to a steady stream of neoliberal cuts to services. They regularly mobilize and lobby governments to adopt standards, identified by researchers and practitioners across the vast field of health care, which are clinically proven to raise patients’ quality of life while reducing stress on the healthcare system. For example, it is widely understood among medical professionals that increasing nurse-to-patient ratios and the number of hours nursing home residents are cared for frees up hospital resources such as ventilators.

Because the healthcare sector has a high rate of unionization, protections from a collective agreement allow workers to regularly document the effectiveness and deficiencies of every one of the numerous jobs within the system. Crucially, it also allows them to do so without the fear of reprisal. For example, attendants, chaplains, cleaners, clerks, cooks, dieticians, housekeepers, maintenance trades, nurses’ aides, nurses, and physicians frequently meet with healthcare managers to assess the delivery of services associated with their respective jobs. Every association and union within the healthcare system likely has filing cabinets bursting with paperwork they’ve sent to managers, urgently requesting more staffing. The myriad grievances, work-load complaints, and absences due to injuries filed by workers may fall on a sympathetic ear from time to time; however, increases to staffing are almost never accepted as a solution.

That is, until a crisis like this one hits.

The people making political and economic decisions around public health in the province effectively bind healthcare administrators with ironically titled policies and legislation. It’s worth examining the long list of health care cuts in Ontario since the last provincial election in 2018. And just think, mere weeks before the alarm bells about COVID-19 were being sounded by China and the World Health Organization, Queen’s Park passed Bill 74, the People’s Health Care Act. This legislation is widely seen as a blueprint for the boldest attempt to privatize the province’s healthcare system in more than a quarter-century. Prior to the crisis, many in the province would have likely tolerated a further hollowing out of their healthcare system in exchange for minimal promises that some vestige of a public system be guaranteed. For those who recall the robust healthcare system of decades past, it is easy to envisage what a shell of a shell would look like.

But now that Ontario is in the midst of a pandemic, it is so much easier to see that healthcare workers have been right all along: decades of cuts to the system have really put our collective health—and our lives—at risk.

Sadly, the province’s emergency orders are inspired by the same logic that fuelled these cuts in the first place, and seek further cost-savings, reassignments, and reshuffling of existing resources instead of properly and fully funding the system. Even more worrying, the measures attempt to bypass existing collective agreements. Indeed, the province purposely excluded hospital and nursing home unions from discussions about increasing capacity in order to deny newly enlisted volunteers and non-front-line staff from the provisions, including paid sick days, that many unionized workers enjoy.

The province claims these measures will only last 14 days, but they will no doubt be extended beyond that. This is based on a misunderstanding of the timelines required to train people to adequately handle the severity of the crisis, as well as the incorrect view that collective agreements represent an impediment to this process. The opposite is true: collective agreements are even more urgently needed in times of crisis because they guarantee workers the safe and healthy conditions they need to respond in difficult conditions. They also help protect the wider public.

It is deeply unfair that, after so many years of cuts and chronic under-staffing, there are so few healthcare workers to carry the burden of society at this time. Working people have long known that capacity and staffing are two sides of the same coin. The government is right to hire more emergency and front-line staff, but wrong to deny them paid and emergency sick days and other provisions that would allow them to take care of themselves if they become sick.

As this pandemic has made abundantly clear, governments must relieve all workers—including temporary, casual, and part-time staff—of the economic pressures that lead them to come to work sick, and thereby allow them to follow the recommended health measures to slow and minimize the spread of COVID-19.