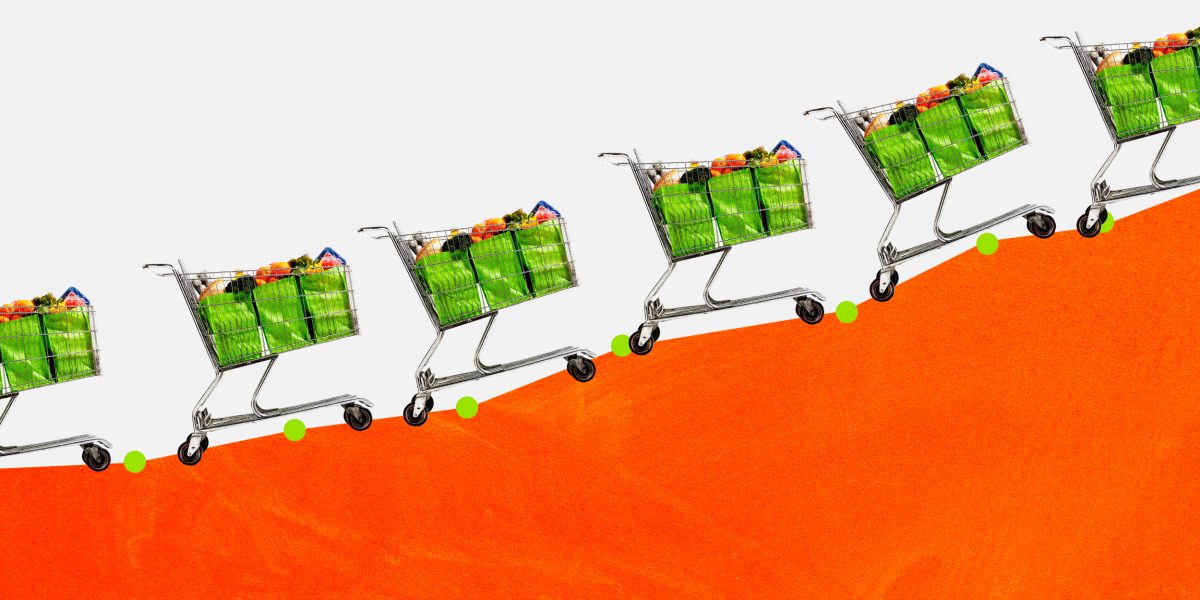 Anyone who has gone to the grocery store this year has noticed the prices of basic food items are going up. For many people in Canada, especially those just making ends meet, this rise in everyday prices is a concern.

By November of 2021 the year-over-year inflation rate in Canada soared to 4.7%. This is the highest rate of inflation we have seen since the early 1990s, aside from a brief moment of inflationary pressure that gripped the Canadian economy in the lead up to the Iraq war in 2003. Growing inflation is not just happening in Canada, most countries around the world are faced with inflationary pressures as they recover from the pandemic.

The Bank of Canada has maintained its inflation target of roughly 2%, so what is driving this rising inflation? And is this increased rate of inflation temporary or something that’s likely to stick around?

Inflation is a measure of the decline of the value of currency relative to the price of goods. For people who don’t own assets or productive goods – the working class – high inflation is bad news because it eats into the purchasing power of people’s wages and savings.

For businesses and owners of assets, moderate inflation can be a good thing. It signals a growing economy and favourable government policies. High inflation, hyper-inflation or deflation, on the other hand, signal economic problems that the ruling class tries to avoid.

Inflation may seem simple enough but its causes are imperfectly understood. Most economists explain inflation as a result of the money supply growing faster than the economy. This monetarist explanation of inflation sees central bank and government policy as the source of, and solution to, inflation.

The problem with the monetarist understanding of inflation, where an increase in the money supply increases inflation, is that it doesn’t align with real world events. When the pandemic first gripped the world economy in 2020, governments and central banks opened their coffers to increase the money supply but inflation didn’t budge. This is in part because the rate at which money is spent and distributed in society also changes.

Governments and central banks may increase the money supply in the banking system but that doesn’t mean it will be invested in the broader economy. Time and again the monetarist explanation fails to explain real world events.

Some Keyensian economists understand inflation as being more of a product of costs of production rising – namely, the cost of labour – but other inputs like energy costs could factor in. Keynesian economists will see a relationship between unemployment, the cost of labour and inflation. Known as the Phillips curve, this theory argues that as unemployment lessens, the price of labour increases and creates an inflationary pressure on prices in the broader economy. This can sometimes trigger what is known as a wage-price cycle.

The last decade is a good example of how the Keynesian explanation of inflation also falls short. The Canadian economy saw record low unemployment rates from 2016 through 2019 yet maintained record low levels of inflation. Conversely, in the 1970s inflation was very high in Canada yet unemployment was growing.

Perhaps a better way to understand inflation is to see the concept of inflation as linked to that of value creation. Money is not simply fiat currency: it has a relation to value creation in the capitalist economy. In other words, when the rate of profit is running high in capitalism – where capitalists are successfully upping the rate of labour exploitation and creating new surplus value – this creates inflationary pressure.

Of course, how this is handled by the ruling class can determine whether that inflationary pressure gets out of control. Likewise, how the underlying health of the capitalist economy (from a capitalist perspective) interacts with exogenous factors – such as a pandemic or climate change or the availability of certain resources – impacts inflation.

What is driving inflation now?

The current rise in inflation is happening across the globe. This is the outcome of a confluence of factors very much driven by how ruling classes have chosen to address the pandemic and its economic impact.

Central banks around the world have kept interest rates at near-zero for much of the pandemic in order to stimulate economic activity. A good chunk of companies are essentially only surviving because of ultra-low interest rates. Many central banks are also engaged in aggressive bond and asset purchasing in order to flood the financial system with liquidity.

Trillions of dollars flowed into the financial system during the course of the pandemic. On top of that, many governments rolled out large fiscal spending programs to prop up businesses and see people through the acute phase of the pandemic.

Initially, as economic activity slowed worldwide, these measures did not result in any substantial rise in inflation. However, by the spring of 2021 prices started to rise. This reflected rising economic activity and the snap back effect of economies across the globe.

Demand for raw materials and inputs for business dipped in 2020 only to rise later that year. This whipsaw created all sorts of supply chain problems in the global economy. Prices for commodities like lumber, copper, and aluminium spiked, along with the demand for oil and gas. The global supply chain has been organized around a just-in-time system in order to maximize profits, but the pandemic has thrown that supply chain model into crisis.

The fiscal and monetary policies pursued by governments around the world stabilized the financial system and averted deep sustained recessions in most countries, but they have also led to a speculative frenzy in the asset market. Stock prices have ballooned and driven inequality to new heights.

The trading value of just the derivatives market on Tesla stock averages $241 billion a day in recent weeks. Tesla stock and its options market are bigger than Amazon and the rest of the S&P combined. Likewise, the housing market in countries like Canada have surged to record highs. This speculative frenzy has also produced what Marx called “a feverish attempt to make money without the mediation of the process of production,” in the form of NFTs, meme stocks and Bitcoin.

There is every indication that inflation will continue to run hot through 2022, with food prices continuing to climb. For workers this is bad news. Inflation always bites harder for the working class which doesn’t see the benefit from rising asset prices and which has little protection against price increases of day-to-day items. The only recourse for workers is to fight for higher wages and, where possible, indexation of wages to inflation.

It is unlikely that red hot inflation will be a permanent fixture of the post-pandemic world. But the current inflationary pressure does put the ruling class in a bit of a bind. Earlier this year most economists and central bankers were predicting some growth in inflation as the global economy got back to growth. This inflationary growth was dubbed “transitory” by U.S. Federal Reserve Chairman Jerome Powell and U.S. Treasury Secretary Janet Yellen. Both Yellen and Powell are now admitting that inflation is not just a short-term phenomenon.

The ultra-easy money policy pursued by many governments and central banks looks to be ending. While this may dampen inflation, it will not solve supply chain issues and could likely stall economic recovery in many countries.

The cheap credit and easy money policies – combined with the massive fiscal stimulus from governments – averted a massive economic crisis, but they also created a situation where increases in interest rates, or the pull back of fiscal support for businesses, could trigger a real slowdown in the economy. The impact of the COVID-19 omicron variant is hard to know.

We can probably expect economic growth to continue in 2022 and inflation is likely to remain high for the first part of the year.

Make the rich, not workers, pay

This current inflation spike presents all sorts of contradictions for the ruling class. If they choose to aggressively tackle inflation by ending cheap credit and easy money policies, they risk stalling economic recovery. But if they choose to let inflation ride they risk drawing the ire of working people whose demand for action will grow louder.

The ruling class will try to blame workers for rising inflation, claiming that CERB/CRB has given workers undo leverage in the labour market.

While the decent work movement forced Ontario Premier Doug Ford to raise the minimum wage to $15 per hour, he will resist the call to raise it to $20 using the familiar myths that raising wages results in price increases – thus blaming workers for capitalist-caused inflation. But we shouldn’t underestimate how easily this argument can be picked up as common sense when faced with rising prices and food insecurity.

We should celebrate where workers win higher wages and frame the fight for higher wages as essential for keeping up with the rising cost of living.

For workers in the public sector, fighting against legislative pay caps, like Bill 124 in Ontario, is also key. It is workers who have sustained society through the pandemic – from nurses whose wages have been frozen by Bill 124, to minimum wage grocery workers, to migrant farm workers (who are excluded from the minimum wage). A recovery from the health crisis also demands economic justice.

While the 1% will try to solve capitalism’s inflationary problems on the backs of workers, workers need to keep fighting for higher wages and make sure that the rich pay.