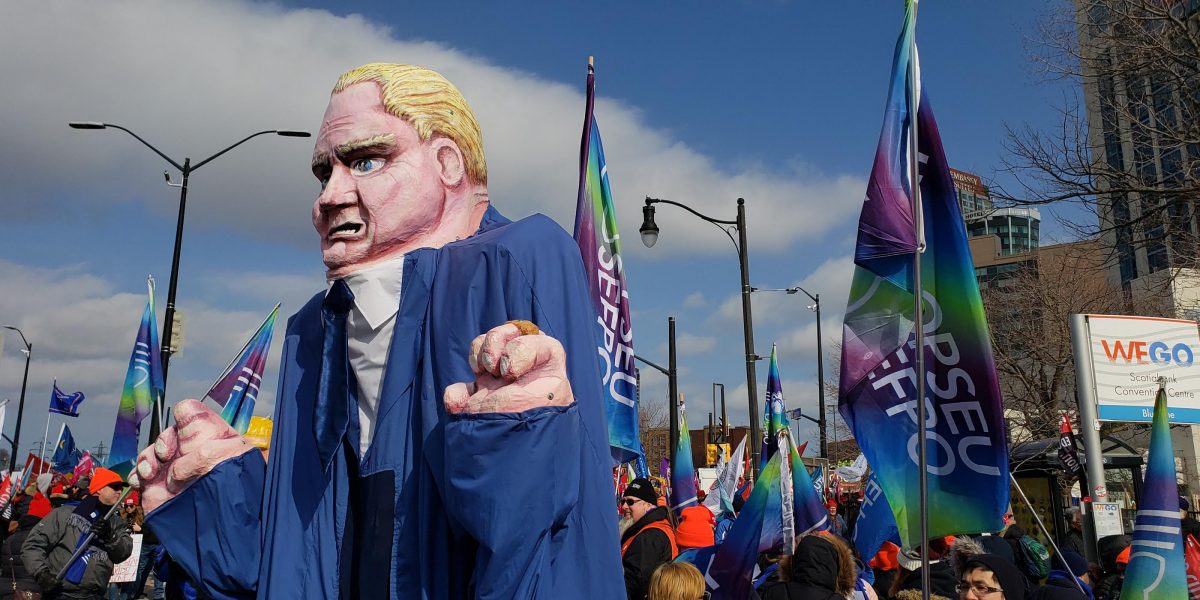 As the Ontario Progressive Conservatives gathered in Niagara Falls for their party policy convention on Saturday, Feb 21 they were greeted by thousands of trade union protesters. Since being elected in 2018 Doug Ford’s government has relentlessly attacked public services and workers’ rights. On Friday, 200,000 teachers and education workers from four unions were on strike to oppose the proposed government cuts. The Ontario Federation of Labour organized this rally in response to Doug Ford’s austerity agenda. Spring Magazine spoke to a number of protesters at the rally about why they attended and what is next in the fight against the Tories’ austerity agenda.

“I’m here to support all the unions. I am now retired. They say ‘united we stand, divided we fall.’ Education is number one because without education we have nothing. We need education for children, grown-ups and ourselves.

United we stand, divided we fall, look what’s happening with the trains (blockades in support of Wet’suwet’en). We can put the whole country on a standstill if we all unite together, as we stand here today and put this government at a standstill. We don’t want Doug Ford.”

“We need to be united. That’s the only way to put pressure on the Ford government and against the cuts.  We need to be united on all fronts. I think education is number one and we also need to look at health care and labour issues.”

“We are down here in solidarity with our union sisters and brothers to voice our objection to the cuts, not only the cuts we’re facing in education, but cuts that are happening in various sectors across the province. We are trying to stop this rampage of privatization, downloading and cuts to services to Ontarians that are essential to everyone in the province.

Every teacher was on strike on Friday. The first time in 22 years, that speaks volumes. It was an historic day for teachers in this province. We have objections to the increase in class sizes, which will cause the quality of learning for our students to go down. What the government fails to see is that class size is not just a number. You have to look at class composition. This means looking at the various needs and the learning abilities of our students. If you pack a class of over 35 students where there is no room for desks, no room for additional supports and are putting one student in front of all this, it is not going to be the quality of education Ontario needs. We are saying no to that.

We are standing up for our students. We feel it is important to preserve the quality of our education system. And we are going to fight.”

“I want to support the teachers. When I went to school I was bullied because I had trouble with tests, so with big classes you’ll hurt more students.  With smaller classes and the teacher’s help, more students will benefit.”

“The current proposals by the Ford government are not acceptable  to our members and our communities.  We have some small schools in rural towns that don’t have any classes as big as 28 students. So when talking about a move to that kind of number you are going to be looking at school closures, which means long long bus rides for students. The other thing we are facing is mandatory e-learning. Internet connectivity is spotty in rural Ontario and there are many rural  communities that don’t have access to the proper technology and are unable to support students with special needs. Mandatory e-learning would be a disaster in our area.

Rallies like this show that the public doesn’t support the cuts. We want to keep the pressure on the government and show that educators and families are concerned about learning conditions. We teach in small towns and the support has been overwhelming.”

“I am here to support the teachers. I feel the government is taking too much. Today is pretty good and rallies are a good way to fight back. This is one of my first rallies.”

There’s been a rising level of resistance to the Ford attacks, the cuts to public services, attacks on workers’ rights and our communities, in particularly the strikes by teachers and educational workers across the province. And so the opportunity to take that fight to the door of the Tory party is hugely important. Also there has been a lot of discussion and debate within the labour movement about how we build the fight back and a strong turnout at Queen’s Park by teachers and education workers, of 25,000 or more, is a real high water mark and what we need to do is continue that struggle.

Critical to building the fightback is not just waiting on the leadership of the labour movement but for us to be organizing in our workplaces, in our locals, and with communities and organizations that we might be involved in, to build the fight on a whole range of fronts. Eventually to defeat the Tory agenda, it is going to take more of this, coming together across the labour movement, with our allies, on the streets. So this today is sort of a testing ground. We are going to learn from today and hopefully we apply it as we go forward.

Too often the labour movement gets routinized in the way we work, with a “business as usual” attitude. The challenge with the Ford government’s austerity government is that that’s no longer good enough.  Organizing among rank and file workers, getting them engaged, making sure that workers feel like they’re setting the agenda, not simply waiting for an order from above, is the way to getting it going.

The more organized we are in our own locals, our own workplaces, pushing back, the more likely our unions are to catch up to the members and keep the fight back going. A lot of it is building the fight against the Tory government and the “cut back” agenda and the attacks on workers’ rights. But also there are important struggles around climate action, the fight for climate justice, to defend indigenous rights going on right now. And we have to make the connections between those as well.”