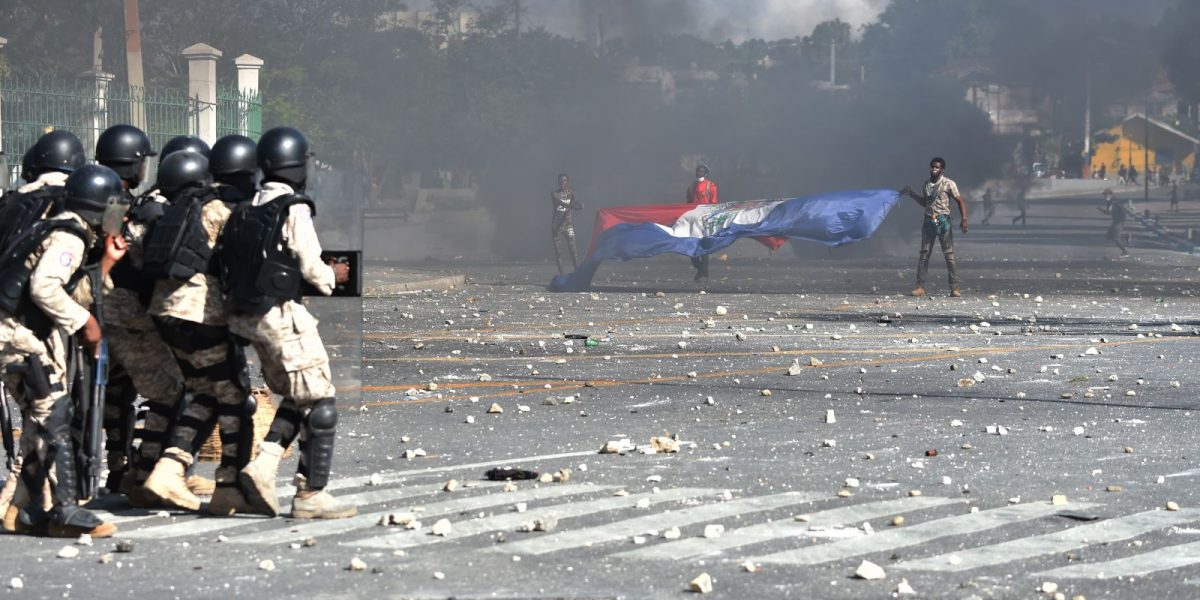 While Canadians emerge frustrated from an election that didn’t produce any change, the Canadian government continues to deny democracy for Haitians in order to stifle change. On Thursday Madame Boukman tweeted, “international law bars foreign embassies from meddling in the internal affairs of nations. But in Haiti, a group of ambassadors from the US, France, Canada, Spain, Germany, EU, UN, OAS formed a bloc called CORE GROUP that literally controls the country and chooses its leaders.”

The Core Group is a coalition of foreign representatives (US, Canada, France, Spain, Germany, Brazil, UN and OAS) that periodically releases collective statements on Haitian affairs. They also meet among themselves and with Haitian officials. Recently, the Core Group propped up a dictator and effectively appointed Haiti’s de-facto prime minister.

One would expect the Conservatives and Liberals to support such a flagrantly racist and colonial alliance. But in response to a Canadian Foreign Policy Institute election questionnaire asking, “Does your party support ‘greater’, ‘same’, ‘less’ or ‘no’ focus on Haiti Core Group?” the NDP answered “same”. It’s a remarkable endorsement of imperialism, racism and Canadian policy in Haiti.

The Core Group was officially established by a UN Security Council resolution on April 30, 2004. That resolution replaced the two-month-old Multinational Interim Force — created after US, Canadian and French troops invaded to overthrow the elected government — with the United Nations Stabilization Mission in Haiti (MINUSTAH), which occupied the country for 15 years. Point 5 of the resolution “supports the establishment of a Core Group chaired by the Special Representative and comprising also his/her Deputies, the Force Commander, representatives of OAS and CARICOM, other regional and subregional organizations, international financial institutions and other major stakeholders, in order to facilitate the implementation of MINUSTAH’s mandate, promote interaction with the Haitian authorities as partners, and to enhance the effectiveness of the international community’s response in Haiti.”

While it is specifically cited in the UN resolution, CARICOM (Caribbean Community) hasn’t played much of a role in the Core Group, John Reginald Dumas recently explained. He is a Trinidadian diplomat who was the UN Secretary-General’s Special Adviser on Haiti at the time of the Core Group’s creation.

Unofficially, the Core Group traces its roots to the 2003 “Ottawa Initiative on Haiti” meeting. In a rare major media look at that private meeting, Radio Canada’s Enquête pointed out that the Core Group was spawned at the “Ottawa initiative on Haiti”. Held at the Meech Lake government resort on January 31 and February 1, 2003, no Haitian officials were invited to a gathering where US, French, OAS and Canadian officials discussed overthrowing Haiti’s elected government, putting the country under UN trusteeship and recreating the Haitian military, which largely transpired a year later.

The 2004 coup and UN occupation that spurred the Core Group has been an unmitigated disaster for most Haitians. An individual who had been living in Florida for 15 years, Gerard Latortue, was installed as prime minister for two years and thousands were killed by the post-coup regime. Besides their role in political repression, UN occupation forces disregard for Haitian life caused a major cholera outbreak, which left more than 10,000 dead and one million ill.

In a sign of the disintegration of Haitian political life under Core Group direction, two months ago the (de facto) president was assassinated in the middle of the night by other elements of the government. While there were thousands of elected officials before the overthrow of the elected government in 2004, today Haiti doesn’t have a single functioning elected body (10 senators mandates have not expired but it’s not enough for a quorum).

By basically any metric, 17 years of Core Group influence in Haiti has been a disaster. But even if that were not the case the NDP should oppose the nakedly imperialistic alliance on principle. Just imagine the Jamaican, Congolese, Guatemalan and Filipino ambassadors releasing a collective statement on who should be prime minister of Canada. How would Canadians feel about that?

Remarking on the racial dimension, Haitians on social media often contrast the skin tone of Core Group ambassadors to most Haitians. Above a video of the German ambassador speaking on behalf of the alliance, last week Madame Boukman noted on Twitter, “The media deceptively covers up Haiti’s reality as a modern colonial project, where a German ambassador can boldly announce the country’s future under the control of a CORE GROUP of white supremacist ambassadors from the US, Canada, France, Brazil, Spain, Germany, EU, UN & OAS.”

As the letter concludes, “it’s time for the Canadian government to stop propping up a repressive and corrupt dictatorship in Haiti.” The NDP should join this call, and use their power in the new minority government to pressure Trudeau to end Canadian imperialism Haiti, rather than supporting the status quo.