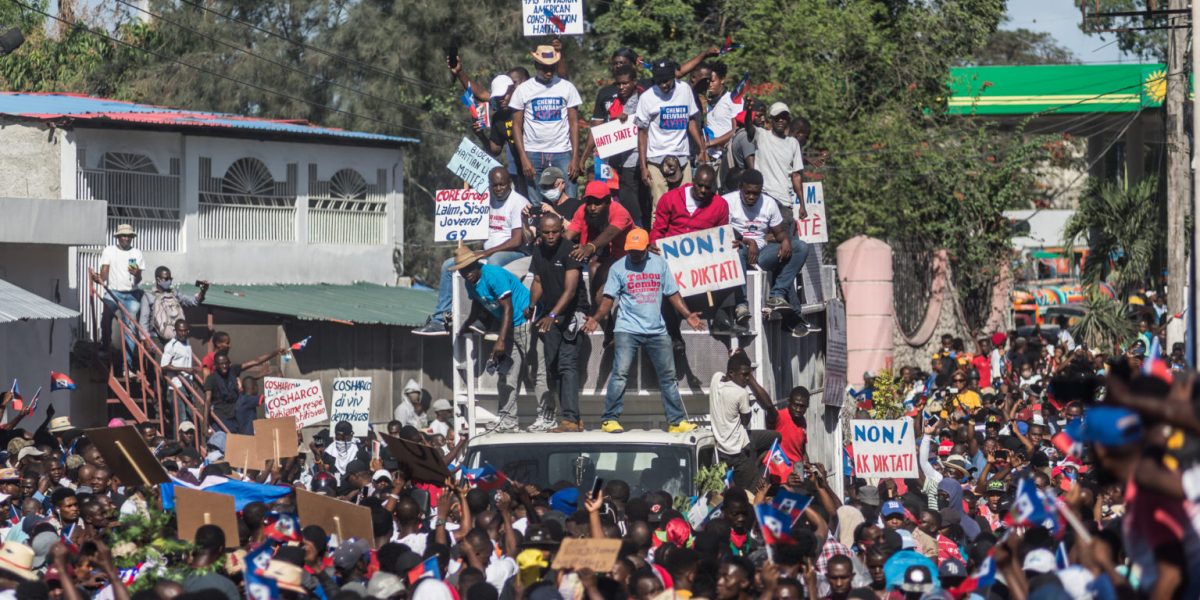 The Trudeau government continues to be committed to dictatorship in Haiti. They continue to provide repressive policing and other assistance to Jovenel Moïse’s regime as its violence becomes ever more difficult to deny.

At the end of last month Harvard Law School’s International Human Rights Clinic co-published a report with L’Observatoire Haïtien des crimes contre l’humanité detailing significant state-sanctioned violence. “Killing with Impunity: State-Sanctioned Massacres in Haiti” documents three “brutal attacks” that left 240 dead, in neighborhoods known for resistance to Moïse. “This state policy”, suggests the report, “can be gleaned from the consistent targeting of opposition neighborhoods and the repeated involvement of government officials, police officers, and police resources in the attacks. Moreover, state actors allowed the attacks to be carried out without police intervention and have since failed to punish those responsible.” The report also points out that the “Haitian National Police (PNH) has repeatedly used excessive force—including shooting live rounds and teargas—to shut down peaceful sit-ins and other demonstrations.”

The Harvard report elicited no comment from Canadian officials or mention in the media. Instead of questioning police violence, Canada’s ambassador Stewart Savage participated in a May 13 graduation ceremony for 94 Haitian police officers. Savage was in attendance alongside de facto Justice Minister Rockefeller Vincent and controversial head of police, Leon Charles, to celebrate the Canadian-funded police training initiative.

Savage and previous Canadian ambassadors have attended innumerable such functions all the while saying little about police repression. Since the 2004 coup Canada has expended more financial, training and diplomatic resources on the PNH than any other foreign police force.

But the political implication of Savage’s participation in the police graduation ceremony went beyond simply continuing Ottawa’s backing for a force protecting Moïse and a highly unequal society. For more than a year Moïse has been ruling by decree and his already limited constitutional legitimacy expired February 7. Now he is trying to rewrite the constitution.

The proposed constitution also allows the president to run for a consecutive term and strengthens the presidency by eliminating the senate and replacing the prime minister with a vice president who answers directly to the president. It also gives all elected officials full immunity during and after their tenures, which is important for Moise and predecessor Michel Martelly who are implicated in a massive corruption scandal.

On Wednesday, Canada joined an Organization of American States mission to Haiti financed by Washington. Supported by Moïse, the delegation will include the US, Costa Rica, Ecuador and St. Vincent. Ostensibly a way to break the political impasse, the delegation is set to minimize criticism of Moise and undercut the opposition’s push to replace him with a transitional government that would organize elections.

The Trudeau government understands full well the illegal power grab it is enabling. In recent months there have been massive protests in Port-au-Prince and other cities against Moïse for extending his mandate and rewriting the constitution. Among a number of similar initiatives, a letter was released three months ago criticizing Canada’s “support for a repressive, corrupt Haitian president devoid of constitutional legitimacy.” Three current MPs and three former MPs, as well as Noam Chomsky, David Suzuki, Roger Waters, Stephen Lewis, Naomi Klein and 500 others, signed the letter organized by the Canadian Foreign Policy Institute. On Thursday, New York based Haitian community group KOMOKODA held a rally in front of Canada’s consulate in that city to oppose Canadian support for Moïse and mining interests in Haiti.

In recent weeks Solidarité Québec-Haïti and Coalition haïtienne au Canada contre la dictature en Haïti have organized rallies in Montréal critical of Moïse and Canadian policy. The Bloc Québécois and provincial party Québec Solidaire also challenged Canada’s role in Haiti, and Green MP Paul Manly recently sponsored a parliamentary petition calling for the release of all documents related to the Ottawa Initiative on Haiti meeting where top Canadian, French, OAS and US officials discussed the removal of the elected president and putting the country under UN trusteeship. The petition links the 2003 meeting to the ‘Core Group’ of foreign ambassadors, which continues to heavily shape Haitian affairs.

Canada’s flagrantly undemocratic policy in Haiti is driven by various factors. An important one is hinted at in the readout from last week’s meeting between Foreign Affairs Minister Marc Garneau and US Secretary of State Antony Blinken. The post meeting statement from the US side noted, “Blinken expressed his appreciation for Canada’s hemispheric leadership in promoting stability and democracy in … Haiti.” This is a recurring theme in Canada’s relations with Haiti. Canada participated in the 2004 coup against Aristide and thousands of other elected officials partly as a way to make good with Washington after (officially) declining to join the Bush administration’s “coalition of the willing” that invaded Iraq in 2003. Former foreign minister Bill Graham explained: “Foreign Affairs view was there is a limit to how much we can constantly say no to the political masters in Washington. All we had was Afghanistan to wave. On every other file we were offside. Eventually we came on side on Haiti, so we got another arrow in our quiver.”

When Stephen Harper took office two years later, according to a Wikileaks cable, the US ambassador in Ottawa asked the prime minister for “increasing [Canadian] support to the new government in Haiti, possibly even taking on more of a leadership role there.” In response the Conservatives entrenched the previous Liberal government’s policy by announcing a five-year $550 million “aid” plan that channeled large sums to the Haitian police.

The Trudeau government’s support for the US empire and its bid to prop up a dictatorship in Haiti must be challenged across the country.