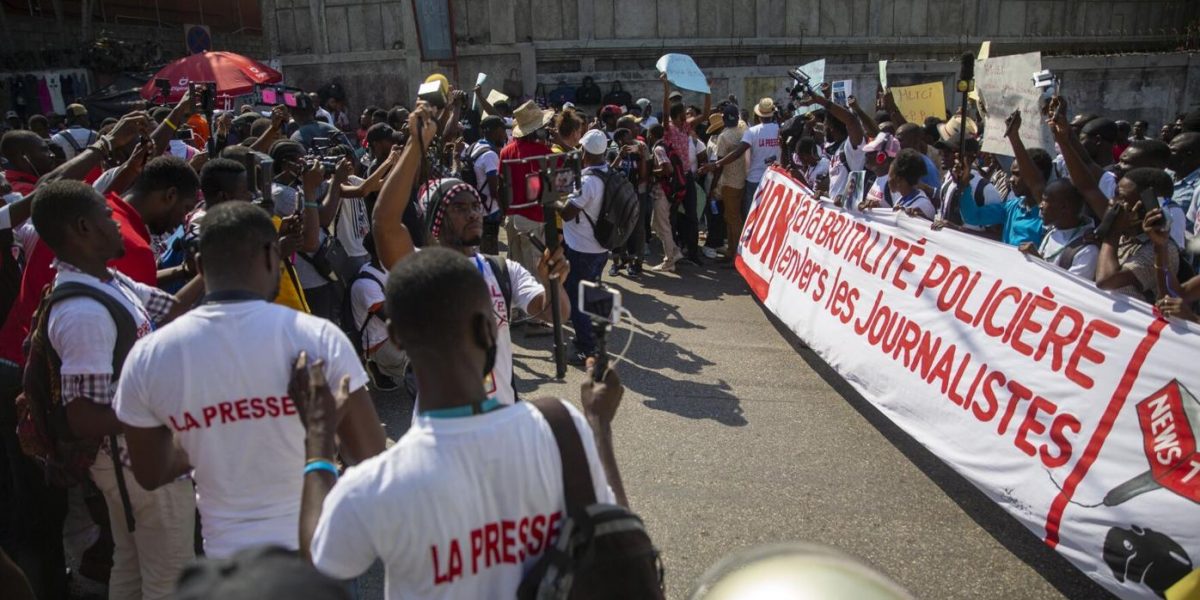 Seventeen years after overthrowing democracy in Haiti, Canada is continuing to support a dictatorship. Our government is not just offering some vague assistance, but rather is paying for the central instrument of that dictatorship’s repression: Ottawa is backing the violent police force that keeps Jovenel Moïse’s regime in power.

The letter notes that Canada “continues to fund and train a police force that has violently repressed anti-Moïse protests. The Canadian ambassador in Haiti has repeatedly attended police functions all the while refusing to criticize their repression of protesters. On January 18 ambassador Stuart Savage met the controversial new head of police Leon Charles to discuss ‘strengthening the capacity of the police.’” But the Canadian government has a long history of using that capacity to repress democracy.

The start of 2004 should have been a time to celebrate the 200th anniversary of Haitian’s successful slave revolution. But instead the Canadian government joined the US and France in sponsoring a coup against elected President Jean-Bertrand Aristide and thousands of other elected officials of his Lavalas party. In 2003 Canada organized the “Ottawa Initiative on Haiti,” a private meeting with officials from the US, France and the Organization of American States, to discuss the overthrow of Haitian democracy.

Leon Charles, trained by the US Naval Academy, oversaw the police in the 17 months after the coup, publicly referring to a “war” the police waged against the pro-democracy sector. A 2004 University of Miami human rights report found that Charles “routinely [gave] orders to stop political demonstrations” while an early 2006 Council on Hemispheric Affairs report noted that “he oversaw the gunning down of unarmed pro-Aristide Lavalas demonstrators by his own men, even … planting weapons on the innocent victims’ corpses.” Thousands were killed in political violence after the overthrow of Aristide.

Even before the 2004 coup, Charles was close to the country’s oligarchs. He reportedly participated in a July 2003 meeting organized by leading sweatshop owner and opposition figure, André Apaid, where he tried to bribe “several Lavalas street leaders in Cité Soleil” to join the opposition. In “Loyal to Washington, New Police Chief Léon Charles Specializes in Counter-Insurgency Intelligence Gathering and Repression” Haiti Liberté editor Kim Ives writes, “under Léon Charles in 2004 and 2005, the Haitian police became a virtual private army of Haiti’s bourgeoisie, which provided officers with weapons and money.” Charles oversaw the reincorporation of hundreds of human rights abusing former soldiers into the police force. At the time US officials privately reported, according to cables released by WikiLeaks, “Charles was unwilling or unable to discipline or arrest officers that everybody knows are corrupt and colluding with the kidnappers.”

Much to the delight of Haiti’s class-conscious elite, Ottawa took the lead in strengthening the repressive arm of the Haitian state after the 2004 coup. Since then Canada has pushed to increase the size of the Haitian National Police (HNP) from 5,000 to over 15,000.

The people of Haiti have identified police as a leading threat to their safety. Haitian prisons are full of poor individuals in pre-trial limbo. In 2017 Le Regroupement des Haïtiens de Montréal contre l’occupation d’Haïti explained that the UN-US-Canada effort to “develop and professionalize the existing National Police… will actually translate into more repression of the Haitian people … The power to maintain order…is really the power to defend the status quo, the power to keep intact the dominant order…One cannot pretend to ‘reinforce’ the rule of law when the state, by its nature and orientation, exists only to defend without compromise the interests of the dominant class and of a certain political class.”

Canadian officials have previously suggested that strengthening the HNP was good for business. After meeting Prime Minister Laurent Lamothe in 2014 Canada’s International Development Minister, Christian Paradis, linked strengthening the HNP to “attracting private investment”. As Paradis said, “we discussed the priority needs of the country as well as the increased size of the Haitian National Police (PNH), in order to create a climate to attract private investment.”

Through its diplomatic and policing support for Jovenel Moïse, notes the public letter, Canada is “propping up a repressive and corrupt dictatorship in Haiti.” More than that, it is supporting a police force that is imposing an extremely inequitable economic order. Haitians led a global movement to abolish slavery, and for this they continue to face prisons and police. But now another abolition movement is rising.

On February 28 the Canadian Foreign Policy Institute is hosting a discussion of Haiti Betrayed, a powerful indictment of Canada’s role in the 2004 coup and subsequent policy in the country. The film is available to watch for free for those who register in advance.