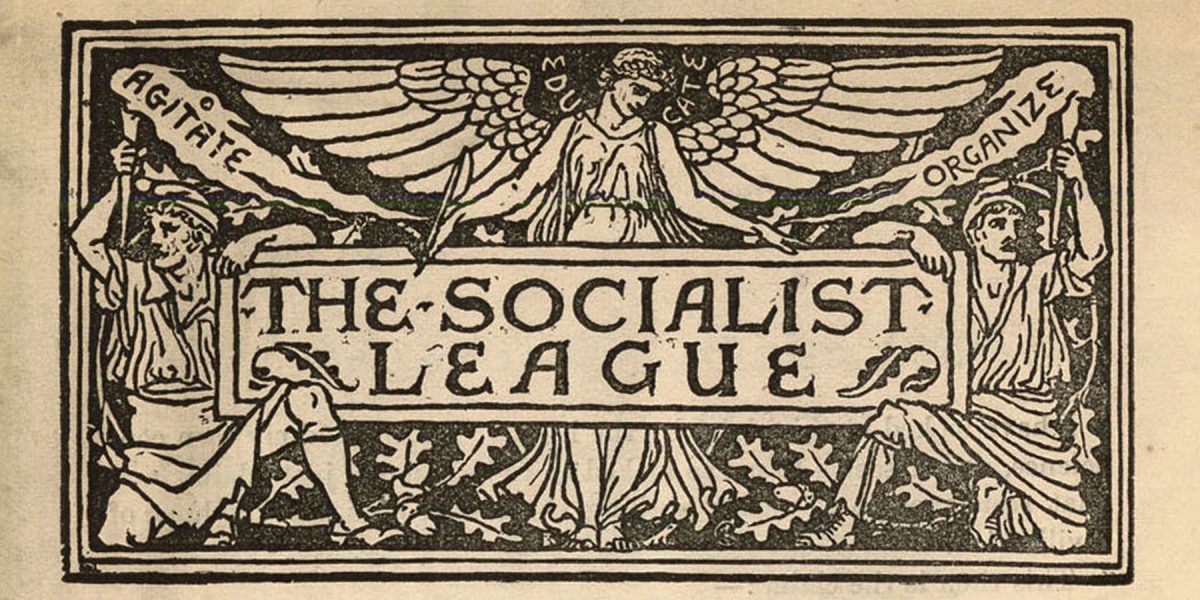 You may have heard this slogan before on the left, but what does it mean? Where does it come from?

This slogan has many origins and popularizers. For instance, Babasaheb Ambedkar, the social reformer and India’s first Justice Minister, used this slogan in his 1942 speech to All-India Depressed Classes Conference to drive home the point to that a mass move movement was needed to upend caste oppression.

The slogans’ first known use was by Social Democratic Federation (SDF), a UK socialist organization whose members included Eleanor Marx and William Morris. The SDF first used the slogan in an 1883 pamphlet entitled, Socialism Made Plain, the Social and Political Manifesto of the Democratic Federation:

“The aims and objects of the Democratic Federation are before you. Success can only be achieved by organised effort:

The first image of the slogan was designed by the artist Walter Crane for the cover of William Morris’ 1885 book Chants for Socialists.

While the earliest known use of the slogan comes from the SDF, it was the German socialist Wilhelm Liebknecht who popularized a similar slogan to a mass audience on the European continent. He used the motto “Studieren, Propagandieren, Organisieren” (Learn [or study], propagandize, organize) at the German Social Democratic Party of Germany Congress in St. Gall in 1887. At the time the party was then outlawed by the Prussian government, but on the verge of growing rapidly.

The slogan was aimed at pointing the party in the direction of winning a mass base for socialist ideas inside the working class. It was a rejection of both conspiratorial organizing and of parliamentarianism. For Liebknecht, engaging in elections were not so much about electing SPD members, as about leveraging the election and parliamentary representation to further the movement.

…only by winning over the masses to our point of view through agitation and propaganda, and through organization make our forces effective. For us parliamentary activity is not an end, but only the means to an end – it must assist us outside the Reichstag, to win such influence with the people that Legislation will not be able to turn away the justified demands of the working class.

Lenin was inspired by this phrase, referencing it in his classic 1899 article “Our Immediate Tasks” which looked at how socialist should build in an organization in Tsarist Russia.

As Lenin wrote, “Studieren, propagandieren, organisieren”— Learn, propagandise, organise— and the pivot of this activity can and must be only the organ of the Party.”

Education, agitation and organizing are three interlinked, not separate, approaches to building the base for socialist ideas. Ambedkar, the SDF and Liebknecht understood that to build a movement an organization had to do all three at once. Lenin very much agreed with this perspective noting that the slogan correctly summarized the necessity for socialists to merge theoretical and practical work into one. This, for Lenin, was the best way to avoid being either ridge in one’s thinking or sectarian in one’s practice.

What is interesting and relevant for socialists today is how Lenin operationalized this slogan. Lenin’s answer to how to “educate, agitate and organize” is an eloquent approach that captures the interplay between the role of an organizational publication and movement organizing that has ultimate goal of building the widest possible socialist movement:

“In speaking of the necessity to concentrate all Party forces—all literary forces, all organisational abilities, all material resources, etc.—on the foundation and correct conduct of the organ of the whole Party, we do not for a moment think of pushing other forms of activity into the background—e.g., local agitation, demonstrations, boycott, the persecution of spies, the bitter campaigns against individual representatives of the bourgeoisie and the government, protest strikes, etc., etc. On the contrary, we are convinced that all these forms of activity constitute the basis of the Party’s activity, but, without their unification through an organ of the whole Party, these forms of revolutionary struggle lose nine-tenths of their significance; they do not lead to the creation of common Party experience, to the creation of Party traditions and continuity. The Party organ, far from competing with such activity, will exercise tremendous influence on its extension, consolidation, and systematisation.”

Lenin understood the aim of socialist organizers was to build up the infrastructure to be able to take on the power of the capitalist class. This meant engaging in the day-to-day struggle with an eye to the future. To do this required organization and the infrastructure to “learn, progandise and organize”. Lenin and other socialists at the time understood without an organization and a publication the slogan “educate, agitate and organize” would be empty sentiment.

The publication was a tool to help engage in socialist politics that simultaneously educated, agitated and organized within the working class. For Lenin, the newspaper was not simply a way to transmit ideas, it was the method by which socialist organized their activity, reached new networks and contacts, learned and elevated the best ideas from struggles, and built a socialist organization committed to social transformation.

The slogan “educate, agitate, organize!” is a call to action with a long and rich tradition on the left. It implores us to act, to learn and to build, and in doing so raises the all important question of how do we do this. With a world in crisis and so much at stake we as socialists must find ways to build organizations and use publications in ways that allows us to educate, agitate and organize for a better world.