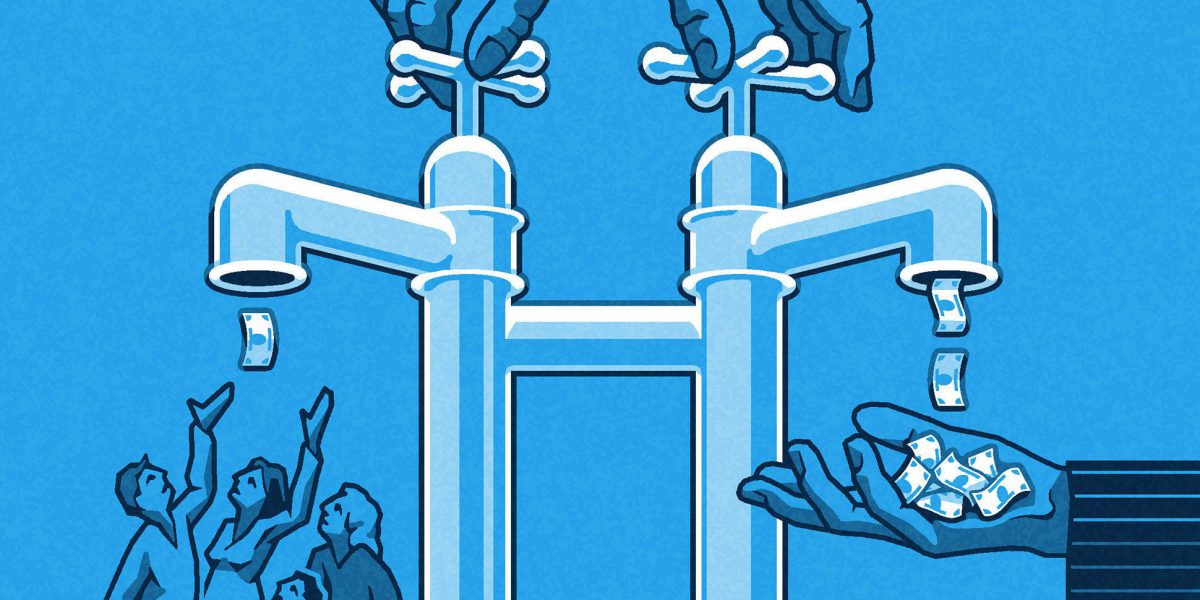 Inequality has grown exponentially during the course of the COVID-19 pandemic— and is showing few signs of slowing down. Amazon, Loblaw, and corporations of all kinds are seeing record profits while their workers struggle to get by. But this phenomenon can’t be solely chalked up to the workings of the “invisible hand” of the free market, or simply due to cheap credit, rising property values, and a red hot stock market.

Rather, the state has played an active role in facilitating the growth of inequality since COVID-19 began to spread throughout Canada. In fact, policies that have explicitly favoured the rich have been the rule, not the exception. From the Canadian Emergency Wage Subsidy (CEWS) program and commercial rent relief to subsidizing paid sick days and the oil sector, the private sector has known—all through the crisis—that the political class would have its back.

The scope of this support is staggering in its own right, but it takes on even more significance as the working class fights uphill battles to win demands like employer-paid sick days and rent relief, as well as protect and improve public institutions and programs. In this crisis, as in past crises, the government marshalled unbelievable resources not only to insulate the rich from danger and to assuage their anxieties, but also to actively improve their bottom line.

Meanwhile, the support workers receive from our government pales in comparison. While many workers were able to qualify for the Canada Emergency Response Benefit (CERB) in the beginning stages of the crisis, the government stopped this program while continuing to support businesses. Workers were never able to access rent relief, nor has the government redressed our under-funded public services and social programs. Laurentian University, a public institution, faces collapse.

As the question of “who pays for the pandemic” grows ever more urgent, analyzing the full extent of support for the rich is central. The private sector’s wild pandemic profiteering— aided and abetted by the state’s ongoing bailouts— makes eminently clear what the answer is.

April 2021 marked the 1-year birthday of the infamous Canadian Emergency Wage Subsidy (CEWS). Supported by an all-party consensus— including both the business lobby and major labour unions— the CEWS was legislated in light of the deepening economic crisis as COVID-19 spread through Canada. The stated goal was to keep workers employed by helping unprofitable employers pay their wages. And indeed, that has happened on some scale.

The bigger story, though, is that the CEWS has become one of the largest and fastest wealth transfers to the rich in Canadian history. The total cost of the program is estimated to come out to $85.6 billion in 2021-21 and $13.9 billion in 2021-22, well in excess of the $81 billion spent on CERB. Much of the cash doled out so far has been handed off to massive private companies earning completely healthy profits. In many cases— Bell sticks out in particular— those companies still issued dividends to investors, participated in stock buybacks, and laid people off.

But because of lax requirements, corporations from Imperial Oil and Corus Entertainment to Leon’s and Canada’s telecom cartel were all eligible for a blank cheque from the federal government. And, unsurprisingly, no fines have been issued despite over 1200 complaints of misuse. This is largely because most of these corporations didn’t actually break the rules: they just had to experience some reduction in profit due to COVID-19, and they would receive cash with which they could do whatever they liked. No restrictions were placed on issuing dividends or buying back stocks. Meanwhile, CERB recipients have been painted as fraudsters, with the government setting up a snitch line to report CERB. fraud.

Set to expire in June, CEWS was recently extended to September (with a slow phase out over the summer months). But CEWS was not the only hand out given to business. $73 billion has been set aside for the Canada Emergency Business Account (CEBA), an interest free loan program for businesses that are a sole proprietorship, partnership or a Canadian-controlled private corporation. So far $46.79 billion has been dispersed in CEBA loans, with disbursements capped at $80,000. Up to one third of each loan can be completely forgiven.

In addition to CEWS and CEBA, business also has access to the Canada Emergency Rent Subsidy (CERS), which has doled out over $3 billion to subsidize rent. This program is available for businesses, not for residential renters. This program was extended into September along with CEWS, and is set to cost another $1.9 billion this year.

Meanwhile, the Bank of Canada has engaged in monetary policies that have directly inflated the value of assets held by the richest Canadians and businesses over the last year. Like other central banks around the world, the Bank of Canada has cut interest rates to near zero and engaged in a massive bond buying spree, purchasing roughly $4 billion in  government bonds each week, and accumulating more than $250 billion of the securities over the past year.

This central bank intervention has had the effect of inflating asset prices and increasing inequality. Trillions of liquidity pumped into the bond and stock markets have created a speculative frenzy with stock prices and asset values reaching record levels, despite high unemployment numbers. Housing prices in Canada have increased over 17% in the last year, continuing its long climb (168% increase in real terms since 2000).

This monetary policy by the Bank of Canada actively widens the gap between rich and poor, as those with assets and access to credit will make out like bandits while those that don’t will fall further behind. The wealth gap in general and the racial wealth gap in particular is expanding, not shrinking. According to the Canadian Centre for Policy Alternatives, 47 billionaires have increased their wealth by $78 billion dollars over the course of the pandemic— an astonishing rate of capital accumulation.

The money is there — we just need to redistribute it

The ease with which billions of dollars have been handed off to the private sector— almost with no strings attached— is undoubtedly frustrating during a period where workers have struggled to win basic protections and improvements to our material conditions. In addition, these state interventions are fuelling the crises that are making our lives worse—propping up the oil and gas sector that is prolonging the climate crisis, rather than investing in green jobs; and subsidizing companies whose denial of paid sick days is fueling COVID-19, rather than making companies like Amazon and Extendicare pay.

But these contradictions expose how capitalism works. In times of crisis, the state can, at the drop of a hat, intervene in extraordinary ways to stabilize the capitalist system, assuage the anxieties of business, and keep profits healthy. No doubt this is aided by low interest rates, allowing governments— not just in Canada but across the global economy— to deficit spend toward recovery. But money has not been doled out fairly. While Canada’s federal government continues to hand out unrestricted billions to keep the private sector happy, it has also wound down income supports and meagre lifelines for the poor.

If angering, these events provide a perfect opening for socialist intervention. It is crucial to expose the contradictions between handing public money to perfectly profitable businesses in the “free” market but crying poor when it comes to saving public institutions, expanding public programs, or giving workers support. Many were afraid that if we didn’t bailout businesses workers would suffer. But the government bailed out businesses and workers suffered.

There are alternatives to business bailouts: investments in services like education, healthcare, dentalcare, pharmacare and free transit. Rather than protecting landlords and bosses, we need legislated paid sick days and a moratorium on evictions. Over the coming years, every time the business class cries foul over demands to increase funding for public services, strengthen employment standards and improve income supports, we should remember that it was them, not workers, who were bailed out by the state.

We know the money is there, and that it can be used collectively when pressured in times of crisis. Our task is to organize and mount a counteroffensive to the business lobby to stop that money from lining corporate coffers—and use it to better our world instead.  And given that the rich have gotten exorbitantly richer over the course of the pandemic, socialists must also work to reclaim that wealth— which workers generated— and ensure it is the bosses and landlords, not the poor, that pay for the crisis.