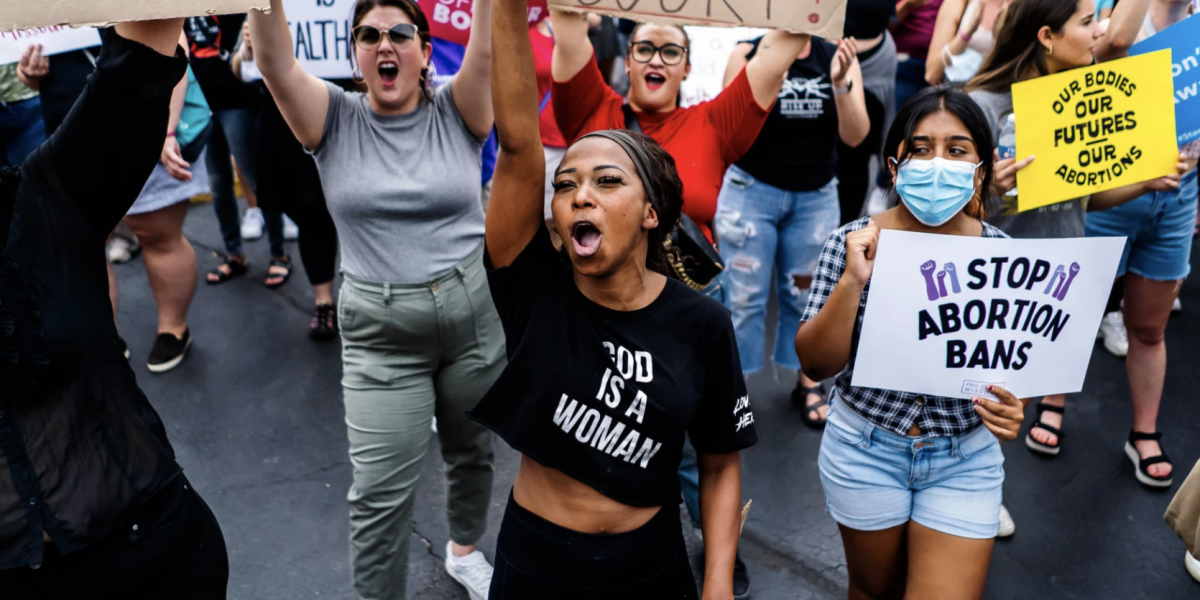 Abortion to Abolition: Reproductive Health and Justice in Canada by Martha Paynter (Fernwood, 2022).

With the overturning of Roe v. Wade, reproductive rights are coming under increasing attack. However, the mainstream political discourse about reproductive rights and access to abortion too often narrows this discussion in a way that replicates systemic oppression and white supremacy.

Martha Paynter’s new book, Abortion to Abolition, aims to recentere the discussion around a framework of reproductive justice, which Paynter highlights as being developed by women of colour. Paynter takes an intersectional approach to the abortion rights, presenting case studies that highlight systemic issues of colonialism, homophobia and transphobia, racism, and classism that infringe upon reproductive rights in Canada.

As the title would suggest, Paynter applies an abolitionist framework to her writing, asserting that prison abolition and reproductive justice are inherently intertwined. As the current political climate has reached a dire watershed moment for the existence and preservation of reproductive rights, reproductive justice discussions are crucial, making Abortion to Abolition a timely and pertinent read.

Kavanaugh, a trans woman, experienced criminalization by Canada’s carceral state from a young age, spending time in a juvenile detention center as a teenager. Paynter begins to describe Kavanaugh’s story by highlighting the direct correlation between criminalization, poverty, and homelessness, and how LGBTQ+ people disproportionately experience these conditions. When Kavanaugh was incarcerated for the murder of another trans woman, her time in prison could be characterized by consistent infringement upon her right to bodily autonomy. This included denial of her hormone treatment, sexual harassment, denial of gender-affirming surgery, and forcible incarceration in a prison designed for men. At the end of Kavanaugh’s case, Paynter makes the claim that bodily autonomy cannot be granted within the revolving doors of the prison industrial complex. Paynter’s emphasis on the intersection between reproductive health and prison abolition solidifies her claim to approach reproductive justice from beyond a white, neoliberal feminist standpoint.

Paynter discusses important cases surrounding access to abortion, including examples of how the government has restricted or limited access through legislation. The case of Chantal Diagle is a prime example. Diagle fought all the way to the Supreme Court of Canada to have an abortion after separating from her abusive partner, Jean-Guy Trembley. The Trembley v. Diagle case is essential for contextualizing the legalities of abortion access. Furthermore, equitable access to abortion has to include locational access. Paynter takes into account the case of Clinic 554, which for decades has been the only free-standing abortion clinic in the Maritimes. While seeking an abortion from a specialized clinic instead of a hospital can decrease the chance of stigmatization and pro-life rhetoric, if the clinic does not subsidize the procedure, the cost can range from $750 to $800, furthering limiting access to abortion.

Reproductive justice is all-encompassing; the framework does not terminate at the right to not have children and access to abortion. The right to have children has historically and presently been jeopardized for those systemically oppressed by the colonial state, specifically Black and Indigenous peoples. Paynter employs the term reprocide to define how state-sanctioned genocide can occur through reproductive oppression. The Canadian government facilitates reprocide through the forced sterilization of Indigenous peoples. Although sterilization laws were repealed in the 1970s, settler colonialism is so deeply ingrained in Canada’s healthcare system that this does not stop forced sterilization from occurring.

Paynter connects reprocide to the terribly essentialist and ableist practice of eugenics through the case of Leilani Muir, a woman sterilized at a Canadian hospital at age fourteen after failing an IQ test and being deemed mentally defective. Paynter’s writing effectively lays out the intersection of systemic racism, ableism, and colonialism, and how these systems of oppression function through the Canadian state.

Prison abolition and reproductive justice are brought to the forefront in the last chapter of Abortion to Abolition. The right to have children and the right to raise children in a safe and healthy environment is something a prison cannot provide. Paynter focuses on case studies of Indigenous women incarcerated in Canadian prisons. The lives of Renee Acoby, Lisa Whitford, Amanda Inglis and Julie Bilotta are horrific examples of what happens to those facing intersecting oppression systems. Indigenous women face criminalization from the Canadian state and experience high rates of incarceration, rendering them more susceptible to parenthood while imprisoned. Intersecting systems of oppression that have detrimental impacts on the lives of Indigenous women outside of prison are only exacerbated within the prison industrial complex. In the case of Julie Bilotta, this led to the death of her child after giving birth in a prison cell.

It is worth noting that the framework of reproductive justice stems from Loretta Ross, a Black activist and feminist who has long advocated for reproductive rights. Paynter draws on this theory as well as the broader abolitionist movement and Black abolitionist thinkers and activists such as Fredrick Douglass, Sojourner Truth and Angela Davis.