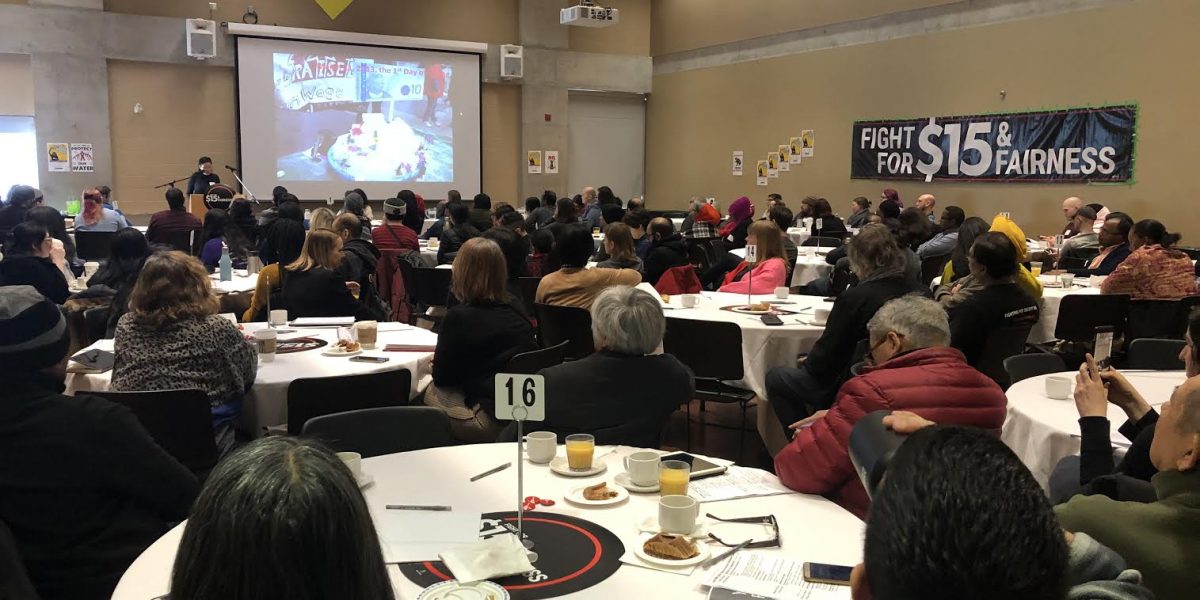 On February 28 and 29, the Fight for $15 and Fairness held its annual provincial strategy meeting. Seven years after the launch of the Campaign to Raise the Minimum Wage, the two days are a chance for organizers from around the province to talk strengths, weaknesses and map a way forward for the movement for decent work.

The campaign, which launched as the Fight for $15 and Fairness in 2015, should look back on its last five years with a lot of pride. It has mobilized workers, students, faith communities, neighbourhoods, health care providers, low wage and workers in precarious jobs of all kinds; collected thousands and thousands of signatures; brought the fight directly to workplaces; named and shamed bad bosses; brought together union and non-union workers, helped revitalize the labour movement in Ontario, while collaborating with international movements for decent work; fought against sexism, racism and xenophobia; and, in 2017, pressured the Liberal government to raise the minimum wage by 21%, introduce paid sick days and emergency leave for all, equal pay for equal work, fairer scheduling, and easier access to unionization.

The election of the Doug Ford led Progressive Conservatives in 2018 saw the rollback of many of those legal victories. The minimum wage did rise to $14 an hour and we made gains on vacation time, but the government has been fighting hard to make conditions good for bosses and bad for workers. Considering these setbacks and the potential victory of a $15 minimum wage for all federally regulated workers promised by the Trudeau government, there was a lot to discuss for $15 and Fairness and its future.

Centred throughout the meeting was the connection between building workers’ power through a determined fight against racism, sexism and other forms of oppression. As provincial coordinator for the $15 and Fairness campaign, Pam Frache emphasized, “there is a corporate class bleeding us dry and using racism and xenophobia to do it.”

This understanding informed the weekend, as many workshops focused on countering anti-immigrant myths, centering anti-Black racism and organizing for migrant rights. The struggles for Indigenous self-determination featured prominently throughout workshops and plenaries as well, and the conference collected more than $2,500 for Wet’suwet’en solidarity. The campaign’s long-term commitment to centering the struggles of racialized workers was clear from the incredibly diverse group of organizers that were participating, hosting and leading the workshops throughout the event.

Erendira Bravo, an organizer from the Workers’ Action Centre, emphasized the importance of fighting for decent work for all, countering the Canadian nationalism that has sometimes been a detriment to the organized labour movement. “We come from countries with a lot of corruption. I came here to escape homophobia and bad working conditions. But, my first year here I found I escaped nothing. I found homophobia and working conditions worse than in Mexico.”

To better those conditions means organizing all workers, not just ones with official status. “Working is not a crime, so even if we don’t have a work permit, it’s not a crime. We can’t call it illegal, so we need to change the narrative,” Bravo challenged our organizing to ask big questions and demand answers. “Are the unions ready to challenge the government and laws that discriminate against undocumented workers? Are the unions ready to be challenged about their organizing practices that aren’t working? Are we ready to stand with Indigenous people against a system that is so bad for all of us?”

Making these connections has been a priority for the campaign. Over the last five years, fighting for decent work meant connecting the bread and butter issues of wages and hours to the way that systemic discrimination operates in Canada’s labour market. This extends to two other areas of work that are key for the $15 and Fairness movement: health care and the environment.

Healing ourselves and the climate

As Carolina Jimenez, registered nurse and coordinator of the Decent Work and Health Network, noted, “bad jobs mean bad health.” The awareness of this has fuelled the campaign to involve health care providers in organizing their coworkers to advocate for their patients and the community by making the case that working standards affect health care.

The Fight for $15 and Fairness has worked hard to reframe things like taking away paid sick days and the burden of mandatory doctor’s notes as real attacks on the health of the province by the Ford government. The growth in this section of the movement for decent work was on display and will be a source of strength as we continue to make the links between bad jobs and bad public health. The Coronavirus makes this organizing more urgent, as it has fuelled anti-Chinese racism and served as a stark reminder of the dangers of revoking paid sick days. The campaign is committed to supporting workers from the Chinese community and winning back paid sick days for all.

This focus complemented what Justin Kong, from the Chinese Canadian National Council, said about organizing grocery workers, “the better we are able to build up worker power in all the diverse communities in GTA, the better we can push back against the various attacks against the working class at large.”

Similarly, the integration of climate justice discussion throughout the conference is an example of how far the movement has come and a glimpse of its future. The campaign has been making the case that many of the low wage workers fighting for decent work are already working low carbon “climate jobs”, and that demands for better conditions and pay are climate demands. Making the case that the fight for decent work is also a fight for climate justice has empowered workers and strengthened the climate justice movement.

Making these connections and starting from workers’ experience has been central to the campaign’s success over the last five years. Particularly noteworthy is the way in which the Fight for $15 and Fairness has helped to organize the unorganized. While it may not have resulted in hard percentage increases in union density in the province, the fight for decent work has been a place for the working class to feel the power of organization and contribute to an explicitly class-based fight back outside of the official union movement. This has in turn influenced and inspired those inside organized labour to raise expectations and include the community in their bargaining.

An example was the recent victory by Foodora workers, with support from the Canadian Union for Postal Workers, to unionize—which could inspire others in the gig economy. As Sarom Rho, an organizer with the Migrant Worker Alliance for Change explained, “legal proceedings should not be divorced from building workers power! We are not waiting to hear from the labour board to organize and make gains!”

This approach remained clear throughout the two days of meetings. The fight against temp-agencies featured prominently in discussions. Deena Ladd, highlighting the fight against Fiera Foods, told a packed auditorium that “our overall strategy is to put temp agencies where they belong. We don’t need them. So we need to make it as expensive as possible for a company to use an agency. Make the client company fundamentally responsible for everything that happens to a temp worker.”

In daring to take on this multi-billion dollar industry, the importance of the community organizations that the $15 and Fairness have built becomes clear. As Ladd explained, “We can’t find temp agency workers at their workplace, we need our community chapters to find them at libraries, bus stops, mosques, and grocery stores. We have to be creative in our organizing because we won’t win by ordinary means. We’ll need more occupations, more direct occupations against employers and we will have to wage this fight in the streets.”

The need for organizing the unorganized and thinking creatively about how to build our power came through in sessions on how to use direct action in union and non-union workplaces, alliance building, and notably in the “Links in the Food Chain: Opportunities from farms to factories and grocery stores to restaurants.” The conference heard from organizers working with Chinese grocery store workers, migrant farm workers and Sonia Singh of the Food Chain Workers Alliance.

Singh pointed out the legacy of slavery that has left farm workers and domestic workers, jobs historically done by African Americans, without union protection: “anti-Black racism is baked into the labour market.” But she also gave examples of multi-racial working class power when she talked about the strike of 30,000 Stop and Shop workers, where Teamsters showed food chain solidarity and refused to cross picket lines to make deliveries.

Giving a glimpse at the power and potential our work can have Singh noted, “how can we take inspiration from Indigenous land defenders and harness our power of disruption? Like Teamsters who caused $11 million in lost profits just by refusing to make deliveries for a day.”

As we look ahead to the campaign’s future, many in attendance were taking stock of how far we have come: the quantity and quality of organizers in the room from so many communities, the high level of politics that the movement has taught itself, the lessons learned from fighting so hard, winning so much, and having so much taken away, and the determination to go back to the roots of the campaign with our new networks and connections.

“The campaign was built by having lots and lots of conversations with people about what two or three things would make their work day better. About what they would be willing to fight for,” Deena Ladd emphasized. “What are their priorities? That built ownership and allowed this campaign to last for five years because it came from our communities and families, it was able to withstand the backlash.”

The next phase of the campaign will involve listening to as many low-wage and precarious workers as we can, using decent work surveys as organizing tools to build our base, and having specific discussions about working conditions. By building on the work we have done, we can strengthen and expand our networks in our workplaces, faith communities, campuses, and neighbourhoods, and continue to build a workers movement centred on fighting for decent work, justice and equal rights for all.