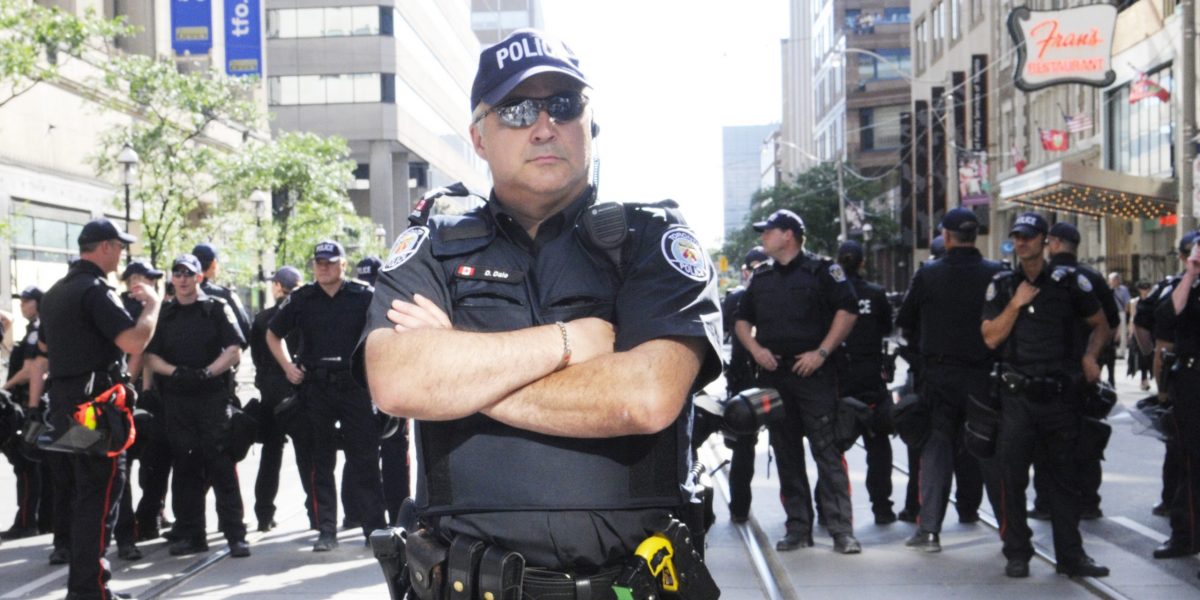 On June 11, 2022, Toronto Mayor John Tory and Toronto Police Service (TPS) Chief James Ramer held a public session at North York’s 31 Division to share details on the expansion of the city’s Neighbourhood Community Officer Program (NCOP) for the first time. The mayor and police are pushing the expanded NCOP as a model of police reform and renewed community commitment. What it really represents is an expansion of layered policing—the intensification and extension of police powers throughout communities through embedded relationships (in business and community organizations) that allow for greater surveillance and social control.

As I have discussed previously, expanding layered policing has proven a popular go-to for police forces looking to expand funding in the wake of growing movements for abolition and police defunding following the police execution of George Floyd in 2020. It provides police a cover of reform and public relations, while actually expanding surveillance, harassment, and criminalization—making policing even more invasive. It provides a base for police to spread their tentacles throughout the community in relations with non-police groups (which now become adjuncts of police). At the same time, even as a response to calls for defunding, it gives police access to new avenues of funding: money that should be earmarked for health care, shelter, housing, community centers, youth sports or education is instead going to layered policing projects in each of these activities.

That this is a targeted policing program is made clear by the TPS announcement that it determined which neighborhoods to expand into through analyses “of crime and demographics.” The TPS have not disclosed what those demographic factors are or what “crime” measures motivated their decision-making.

The TPS also outlined some of the activities they will undertake to “foster relationships with individuals and groups in the community.” These include silly copaganda events like “coffee with a cop” spectacles where they get coffee shops to give out free coffee and snacks while cops mingle with customers. It will also include police school visits, police presence at local events like open houses, and, of course regular meetings with business owners.

Constable Niran Jeyanesan, an NCO in Downsview-Roding-CFB gives examples of some of the quarters with whom police will take their lead—social service agencies and apartment management teams. In his words: “We’re now helping empower our community partners to do their work.” The work of policing.

Fear of fear itself

Remember that much of what police push in their campaigns for funding for such programs is fear of crime rather than crime itself. Police, businesses, and right-wing politicians effectively wield fear politics and crime panics to heighten peoples’ feelings of being afraid or insecure. This has been most infamously displayed through so-called broken windows policing in which people are scared into believing that broken windows and graffiti will escalate into murder. One of the examples of community concerns given by police in Toronto is “a business owner whose had his business repeatedly vandalized.”

But the real effects of broken windows-based policing have not been reduced crime or improved public safety. They have always been racial and class profiling, criminalization, and the expansion of carceral systems. The result has been a clearing ground for gentrification, capital intensification, and property development in poor communities—dispossessing and displacing longtime residents.

Despite this these fear politics are wielded successfully by police and their sponsors even as actual crime rates are dropping. In Vancouver this year, ahead of upcoming municipal elections, police and right-wing politicians have created a climate of crime panic in the face of declining crime in the city.

Research shows that community policing calls are made up largely of “social disorder” issues. Much of what public crime panics focus on is not crime but the survival strategies of oppressed and exploited people. Often it is simply a stand in for things that business and property owners, tourists, and developers do not want to have to see—discarded needles, pee and poo, graffiti. Rather than fund waste disposal and pick up or public bathrooms, let alone housing—the propertied entrepreneurs push policing. Community policing might assuage their fears, but it will only make things worse for people already experiencing the greatest social deprivations.

Indeed, the TPS, in their statements on the NCOP program are explicit about this, asserting: “They are embedded in one neighbourhood for at least four years to actively co-develop solutions and mobilize Toronto Police resources in order to reduce crime, fear of crime and anti-social behavior” (emphasis mine).

More intrusive targeting of less harmful or even harmless “anti-social” or disorderly activities has the effect of criminalizing people without addressing the larger social harms that might underly such behavior—whether poverty, lack of housing, health crises, or simply the pain of trying to survive under capitalism. Of course, notions of anti-social behavior can be constructed in myriad ways and often reflect merely behaviors that some economic or political powerholders, with privileged access to police simply do not like (from loitering, to subcultural dress or music, to use of specific consumables).

The organizations that community policing engages with tend to be made up of more privileged people, some of whom, like business and property owners and landlords, might not even be residents of the neighborhood. These are the classic moral entrepreneurs of critical criminology. They often view unhoused people, sex workers, drug users, renters, and youth as threats, often on a racialized basis.

There is a cynically circular logic to layered policing which benefits police in terms of public relations, funding, and their capacities to pacify poor, racialized, working-class communities. Layered policing expands access to communities and their residents and increases street checks, putting more people into police databases, street sweeps, criminalization, fines, and arrests. These policing “successes” come in handy at budget time when police can show their “results” to secure more funding and resources, claiming how much they have been able to accomplish in “catching the criminals” and contributing to “public safety.” This allows for more of the same.

As scholar-activists Alyssa Aguilera and Alex Vital note, “Community policing tends to turn all neighborhood problems into police problems. Invariably, however, the range of community problems extends far beyond serious crime. Why should the police necessarily be the sole or even lead agency in developing strategies to address community concerns about disorder and public safety?”

Why indeed? The answer is that they should not. Yet community policing programs and their deceptive and asocial “outcomes-based” analytics measures give them a privileged position within local government budgeting debates.

What this will really mean is reduced safety for the most oppressed and exploited community members. All of these policing practices disproportionately target Black and Indigenous people, unhoused people, sex workers, and people who use drugs. Increased contacts with police also mean opportunities to wield their infamous “discretion”, which reinforces harms to poor and racialized people. The social factors of inequality and injustice behind police targeting will be erased of course in police reports to council which will simply read “crime reduction.”

Against the repression and violence of community policing we need real community organizing for care and wellness. First and foremost, it means community mobilization to defend residents and workers who are targeted by layered policing: community defense of unhoused neighbors, sex workers, people using drugs, and youth. It means continued, and expanded, organizing of harm reduction and community care spaces. It can mean community counter-policing and observing and documenting police interactions. It also means continued calls for the defunding of police, and the cancelling of community policing projects and resources. It means working toward abolition.

Some lower-level actions, for those for whom it s safe to do so, can involve disrupting copaganda community policing events and mobilizing against the businesses that host them. In Surrey, our abolitionist group Anti-Police Power Surrey disrupted a coffee with the cops event and the RCMP have not held one here since.