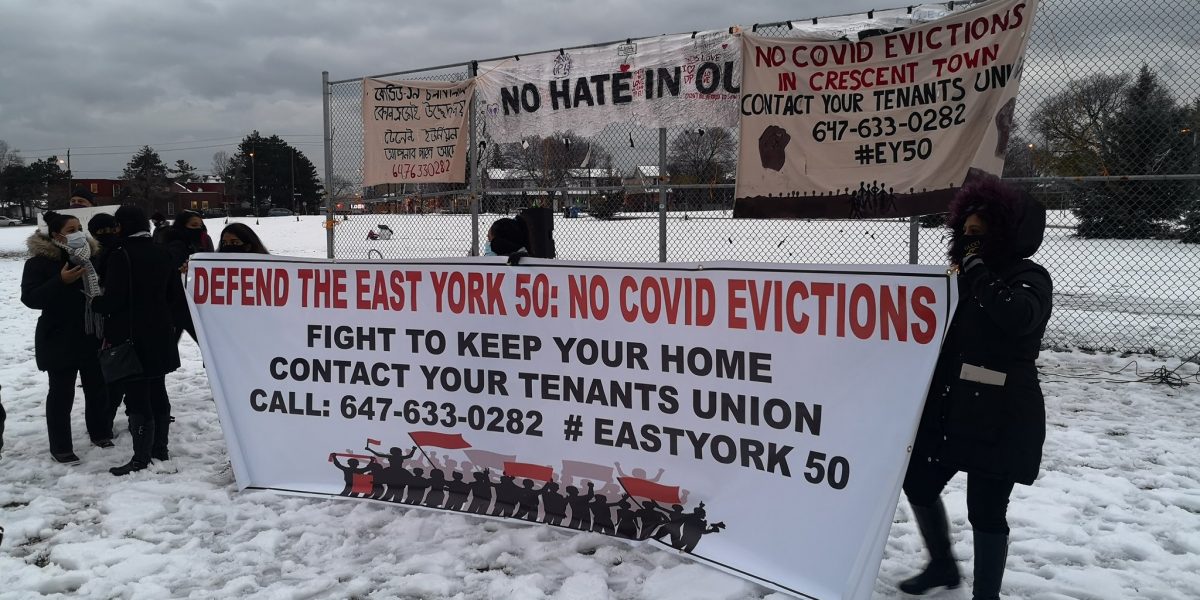 On Tuesday, February 16, tenants facing eviction in Crescent Town went back to the Landlord and Tenant Board (LTB) for an unprecedented process hearing. Over 100 community members involved with housing justice struggles throughout the city watched the proceedings online. On Thursday, February 18, their neighbours in Goodwood Park will also engage in a process hearing.

Taking the fight to the LTB

The process hearings, a rarely used mechanism under the LTB, were compelled by the pressure exerted by both tenant unions for the collective representation of tenants facing evictions.

On Tuesday, the landlord’s representative argued that the tenant unions were illegitimate since rental agreements are signed by individual tenants.

Nevertheless, section 83.3(d) of the Residential Tenancies Act of Ontario recognizes collective organizing and prohibits evictions where “…the tenant is a member of a tenants’ association or is attempting to organize such an association.” Tenant representatives for Pinedale community members argued that tenants involved in the union have endured threats while dealing with a corporate landlord that refuses to negotiate.

At these hearings, representatives for the tenant unions argued that hearings should be held collectively especially because the landlords have retaliated against individual tenants for their participation in the union.

If their request is granted, it will be the first time at the LTB that tenants can challenge their landlords collectively in an eviction hearing.

During the second lockdown, Ontario’s Landlord and Tenant Board initiated, as one adjudicator described, an “eviction blitz.” While LTB hearings are normally conducted in person, all hearings during the pandemic have happened online through Microsoft Teams. Tenants are slotted into a two-hour time frame even though an eviction hearing in person could last a whole day or sometimes longer.

For months, the Crescent Town and Goodwood Tenant Unions have been demanding their multimillion-dollar landlords collectively negotiate with them to come to a solution on rent relief and no covid evictions. In response, Pinedale Properties and Ranee Management filed dozens of eviction applications against tenant union members, in the mass eviction blitz that has been taking place throughout the province.

Both corporate landlords have failed to negotiate in good faith, as per their legal responsibilities, and are coerced into repayment plans that they are unable to afford, leading to eviction hearings before the board.

As the recent Toronto Foundation report, The Toronto Fallout Report: Half a Year in the Life of COVID-19, notes, “The pandemic has laid bare a polarized housing system, with growing real estate wealth on one hand and the spectre of mass evictions on the other….This past spring and summer saw both record-high real estate prices and record numbers of people unable to pay rent.”

The report recognizes that with the eviction moratorium lifted by the province in August, more people than ever in Toronto are reaching out for eviction prevention and rental assistance support. Shelters are operating at full capacity and an estimated 2000 people are living in encampments scattered across the city.

In order to collectively negotiate with their respective landlords, tenants of Pinedale Properties and Ranee Management organized tenant unions – the Crescent Town Tenants Union and the Goodwood Tenant Union.

The unions have sent multiple letters to their landlords – and with no response, organized rallies, occupations of management offices, takeover of intersections, and a 5 week long blockade to ensure their neighburs will not be evicted during the global pandemic.

In response, Pinedale and Ranee have conducted a campaign of threats, harassment, and intimidation of tenants. Pindale and Ranee had filed eviction applications, as early as April 2020 at the height of the pandemic, and have now been identified as two of the most prolific evictors in the city of Toronto.

Over 50 families in East York currently await court dates at the LTB. On Thursday, representatives of the Goodwood tenants union will make their arguments at the process hearing about collective representation before the tribunal. The adjudicator is expected to release their decision by early next week.