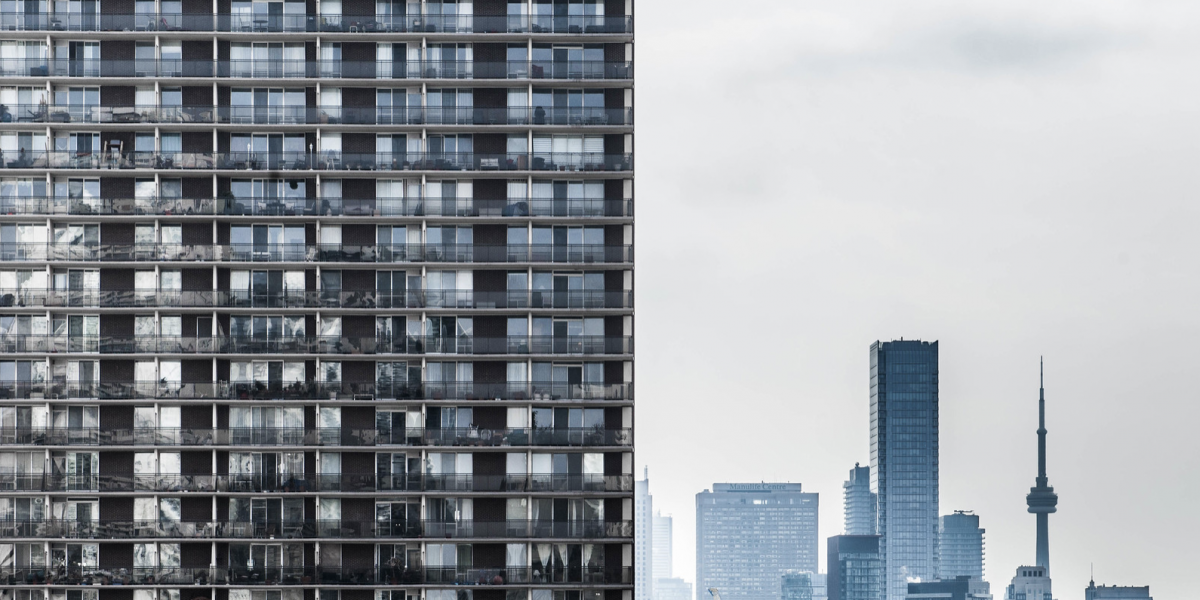 The severity of Toronto’s decades-long housing crisis has been exacerbated by COVID-19, resulting in a tidal wave of evictions. The provincial government has enabled corporate landlords to profit off the pandemic at the expense of vulnerable tenants through mass evictions, predatory repayment plans, and inaccessible hearings. With Doug Ford sitting on $8.7 billion in pandemic aid – none of which has been used to support unhoused people or those in precarious tenancies – the consequences for his inaction are more severe than ever.

The myth of affordable housing

Toronto’s housing market makes it near impossible for working class people to access stability. Since 2016, 47% of all tenants in Toronto live in housing deemed unaffordable, spending more than 30% of their total income on rent. With the onslaught of the pandemic, the unemployment rate has skyrocketed, more than doubling from 5.3% in December of 2019 to 10.8% in December of 2020. Seemingly unconcerned with the carnage of COVID-19, corporate landlords have been actively profiting from the pandemic.

As of September of 2020, the average profit margins of the larger corporate landlords are upwards of 60%. According to Tony Irwin, President and CEO of Federation of Rental-housing Providers of Ontario (FRPO), the organization representing such landlords, they have been attempting to create a rental assistance program. FRPO says the proposal program would see landlords cover between 25% to 33% of unpaid rent, with the government  subsidizing the rest of the cost. As of now, there is no tangible plan in place from landlords to provide any rent relief.

The government also introduced Bill 184, with the intention of supposedly ‘protecting tenants’ rights’, although it largely fails tenants in many ways. For example, tenants are no longer able to raise issues of unsafe living conditions at eviction hearings, and the LTB was able to prevent eviction in cases where the landlord was neglectful of their property. Bill 184 requires tenants to provide a notice of these complaints prior to their hearing.

Landlord and Tenant Board rushing through evictions

The provincial government instituted a moratorium on evictions on March 17, it was lifted at the end of August. The moratorium did not bar landlords from filing eviction notices, so by the end of August, the Landlord and Tenant Board (LTB) had 8,323 pending eviction applications. The LTB had about 2,500 online eviction-related hearings in November alone.

Dania Majid, a staff lawyer from the Advocacy Centre for Tenants Ontario (ACTO), explained that the backlog was intentional, stating that, “The government created a backlog because they didn’t appoint adjudicators – planned this backlog to make sure they could ‘modernize’ the process – move it online – to make it so that tenants would have less access.”

The hearings are inaccessible in a number of ways. Majid explained that the hearing notices are often delivered late, so tenants sometimes have only one or two days in advance before their hearing. If they fail to attend the hearing, the eviction goes through, although when landlords do not attend, the case is considered abandoned. Furthermore, tenants are not provided any support or alternatives for technological issues, such as a poor wifi connection, or a phone plan that does not have enough minutes left to call in properly.

The hearings themselves have been subject to scrutiny and criticism. The government’s plan has been to have landlords and tenants ‘work out’ a plan amongst themselves without a mediator. There is nobody present to support tenants or let them know their rights, which allows landlords to coerce tenants into predatory repayment plans. These plans may consist of a payment to compensate for unpaid rent in addition to paying rent. If the tenants do not pay the first installment on time or in full, landlords are able to make an ex parte eviction, which means they are able to directly evict tenants without going through a hearing process at the  LTB.

It is not just the process that is unfair, the adjudicators themselves have also come under scrutiny. Adjudicators often lack proper training and many have ties to the real estate industry or to the Ford administration. For example, one of the appointees, Dawn King, is a former police officer and the owner of a property management company. Majid referred to the hearing system as a sort of “Russian roulette”, in that the tenants’ fate is fairly dependent on the adjudicator in their hearing, as these calls are based on judgement.

Tenants are faced with obstacles upon obstacles designed to allow landlords to evict tenants in order to hike up the price of their rental units. Many of these units are in poor condition with pest infestations, mould, and desperately in need of repairs. These generally unsafe living conditions result in health problems for many tenants. The health and safety of thousands of working class people are in the hands of the wealthy few, whose interests lie in profiting from this housing crisis.

On January 12, Ford declared another ‘state of emergency’ and a stay-at-home order, which will last at least 28 days. Instead of banning evictions with the second lockdown, Ford has opted to ban residential eviction enforcement. The LTB will continue to hold hearings and landlords can continue to file eviction notices – the only difference is that the sheriffs are unable to enforce evictions. Despite the dramatic increase in COVID cases, Ford is choosing inaction and forcing more and more residents into homelessness.

“Our government has made it clear once again that we cannot leave this work to them,” says Paterson, a tenant and organizer in Parkdale with Keep Your Rent. “We need more working-class people in even more neighbourhoods to begin taking on the work of keeping our neighbours safe and housed.”

In the face of this crisis, we have seen a surge  of community action. Many tenants unions have successfully organized rent strikes and gotten restitution from exploitative landlords. On January 9 residents in Little Portugal were able to organize to stop an eviction from taking place. This is one of many cases in which the organizing efforts of tenants has paid off.

Grassroots collectives and organizations such as Keep Your Rent, Parkdale Organize, People’s Defence Toronto, Acorn Toronto and RenovictionsTO have been organizing actions such as protests and phone zaps to prevent evictions and demand accountability from the government and individual landlords. Legal aid clinics, like the ACTO, have been providing extensive support to tenants, all while advocating for policy change in favour of tenants’ rights.

It doesn’t matter whether or not you are a tenant facing precarious housing – there are always opportunities to support tenants’ rights and push for equitable housing for all. Majid suggested a number of possibilities: monitoring the actions of the municipal and provincial government, getting involved with tenants’ associations, and signing petitions. The most important thing, she says, is to know your rights so you can defend them.

“Any solution to the mass eviction crisis will require working-class people in this city to strengthen the organizing we have been doing in our buildings and neighbourhoods,” says Paterson. “Anyone interested in fighting for their home, and their neighbours’ homes, should visit the Keep Your Rent website. We can help you find your neighbours, and teach you how to defend against evictions.”

We cannot simply sit back and observe as this city falls deeper and deeper into crisis. With the number of unhoused people growing rapidly every day with little to no governmental support, there is no option but to turn to each other for support. We need to demand action from the government for rent relief, investment in public housing and stronger rights for tenants. We need to build powerful movements and support tenant organizing wherever it is occurring.

The past year has highlighted the ruling class’ willful neglect for human life in favour of capital and power. Taking care of one another by ensuring everyone has access to housing, safety, and care is a radical act more important than ever.