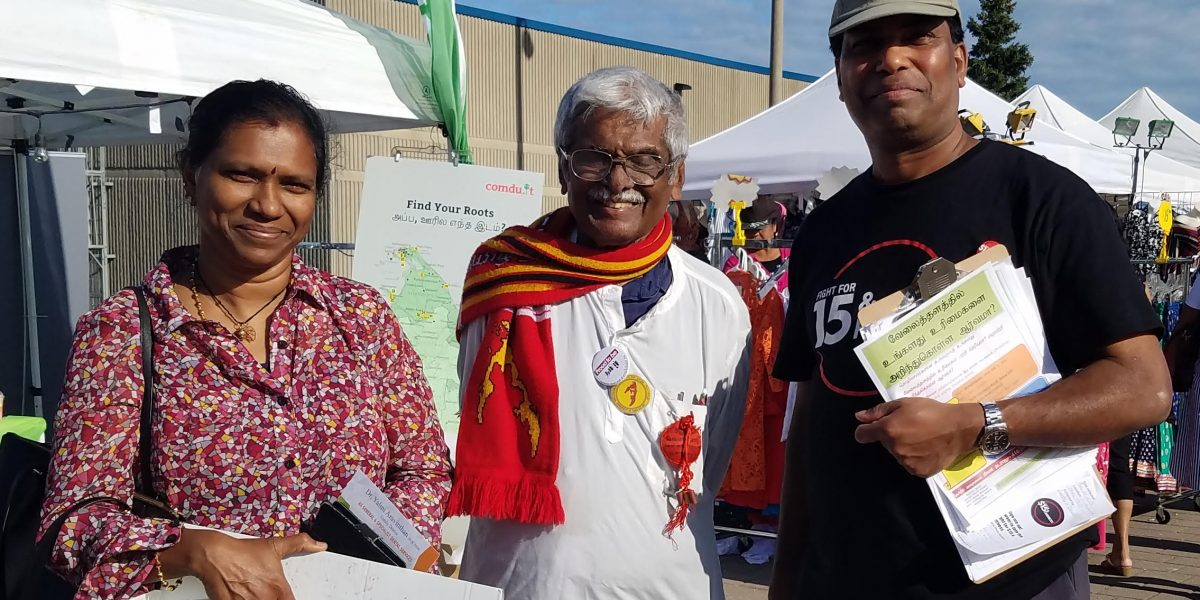 Following on interviews with Fight for $15 and Fairness organizers from Etobicoke-Lakeshore, the campus caucus, and the decent work and health caucus, Springmag.ca interviewed David Harris about organizing with the Tamil community.

How did you get involved and what’s been your experience so far?

Then I got involved in Fight for $15 and Fairness (FF15&F) through attending Toronto-wide organizing meeting, so I learned there was a provincial campaign. So I got involved in FF15&F, including rallies, leafleting and talking to people about workers issues.

Also I came to know that Canadian labour laws are outdated and we were trying to improve working conditions. I learned more people are living on poverty wages, more than one million across Ontario, and juggling multiple jobs. So I joined FF15&F and raised my voice along with them, showing my solidarity.

How are you applying the decent work lens to your area of work?

After two years with WAC and FF15&F I took my leadership training at WAC. Then I had the opportunity to work with WAC as a volunteer. They said I could do workshops with the Tamil community (my community), which I willingly accepted. After the civil war in Sri Lanka, thousands of people left Sri Lanka. We saw our community grow in Toronto. So I saw this is a good opportunity to talk to them about workers’ rights. At the time we were fighting to increase the minimum wage.

The Tamil media was concentrating on issues back home, and less interested in what’s happening in Ontario or about Tamil workers and their struggles and issues. So I took the message about the importance of increasing the minimum wage and more workers rights, and along with another campaigner, organized a workshop and took part in radio and TV discussions on this.

Also, we have two Tamil MPPs so we keep the issues in the media so the Tamil community will talk to these MPPs and their own MPPs. This is how we’ve contributed, by giving out this contact info for MPPs and we regularly send them updates on workers’ rights. Initially the Tamil media was hesitant but when we explained the importance of these issues, the paper now accepts our articles willingly.

What have been the highlights so far, and what are the challenges?

The biggest highlight is the visibility. The Tamil media knows me well. MPPs also know me, WAC and FF15&F well. So when we do workshops and leafleting and petitions, we have the support of the Tamil community.

The challenges are that most Tamil people are in precarious jobs and juggling multiple jobs. The culture means you sacrifice your life for your children. So if they face any job problems they don’t open their mouth, for fear of the employer. They go through hardships to raise the children. But we say, “Don’t worry; come to WAC and we will fight for you.”

Getting them to outreach and other activities like rallies downtown is difficult because they are busy working in 2-3 places. But we do have some other leaders in the community and they join us to meet MPPs and do outreach.

My next step is get supporters to play a leadership role so they will take responsibility for organizing. We give them updates and encourage them to take leadership roles.

What are the next steps and how can others get involved?

Encourage Tamil people to contact me; here’s my info: david@workersactioncengtre.org, or phone David or Milan, caseworker at 416 531 0778 ext. 224