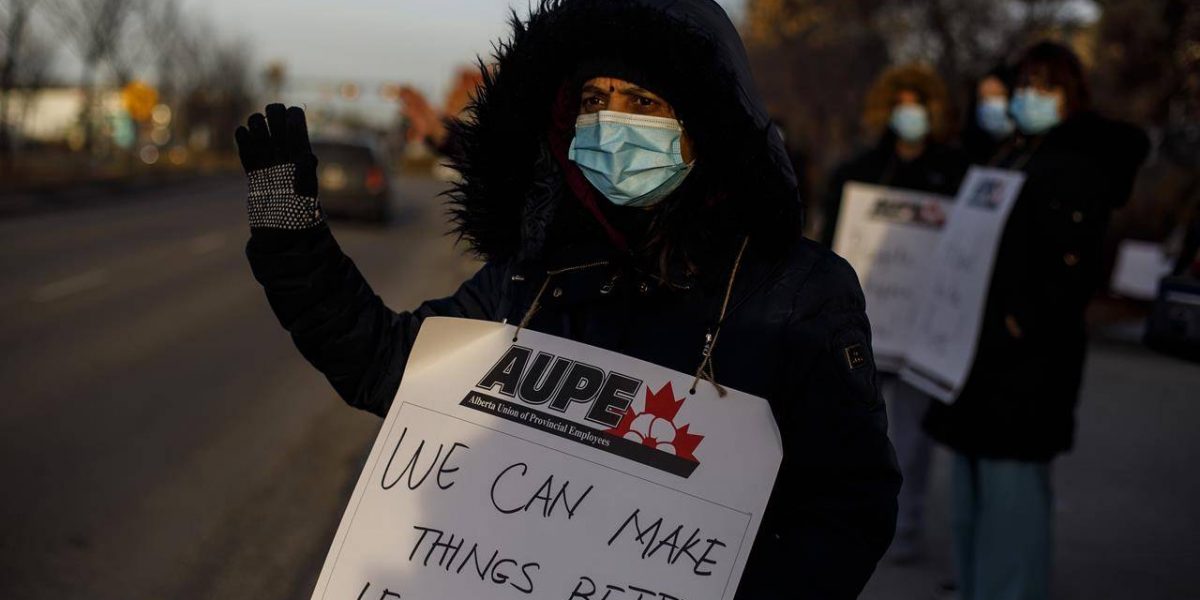 The past ten months of the pandemic have been a nightmare. Over 771,000 cases have been confirmed, and nearly 20,00 people have died in Canada (1,606 in Alberta) as of this publication. Globally, Canada currently has the third highest case fatality rate among medium-large, high-income countries.

Nationally, COVID-19 has been a mismanaged crisis from the start and nowhere is that more apparent than in Alberta. Since the fall, there has been a significant rise in COVID-19 rates across Alberta. New cases reached their highest point during the second wave in October, with 3,138, the highest per capita cases in the country. This has stretched the province’s health care system beyond its limits. Essential frontline workers, disproportionately women and racialized workers, are paying the price.

Before the pandemic, Premier Jason Kenney and the UCP were set to cut healthcare funding (reducing spending by 9%) and privatize the system. At the end of November last year, the Kenney government planned on firing 740 nurses, 3,000 full time equivalencies (FTEs) in general support services, 400 auxiliary nursing care FTEs, and over 1000 professional healthcare workers with plans to privatize large parts of the healthcare system. Now, 10 months later, the government plans to contract out in-hospital food, laundry and cleaning services, removing nurses’ collective agreement provisions, introducing home care co-pays, and more, all while using public funding and healthcare resources to private companies.

From cutting funding to Alberta’s Supervised Consumption Services (SCS), and not renewing opioid treatment pilot programs to ending the master agreement with Alberta’s doctors and freezing physician compensation via Bill 21, healthcare privatizers and profiteers have been given open season on Alberta’s public healthcare system. Privatization of Albertans seniors care has also been ongoing for the past several decades, with Conservative governments subsidizing grants to build privately owned supportive living facilities. The provincial healthcare coalition, Friends of Medicare, has called for enacting patient-staff ratios to address unsustainable workloads which lead to burnout, worse quality of care and attention that seniors receive.

In late March, the Alberta government launched the Telus Babylon telehealth app, which raised many concerns about privacy, wrong diagnoses and pay discrepancies between doctors seeing patients virtually on the app (who were paid more) than doctors seeing their patients by phone or online. This hasn’t been the only technological fix bungled by the government. Another app, ABTraceTogether, which contract traces COVID-19 exposures was minimally used for the first three months and tracked only 20 exposures. The provincial government had opted out of the federal government app, which led to functionality issues for iPhone users.

Last April, healthcare aides who work in private continuing care facilities were also promised a  $2 wage top up per hour extra pay, but a third of these workers have still yet to see that increase. What is important to note is that long-term care workers were restricted to working at only one site to prevent the spread of the virus, with many working multiple part-time or casual contracts in order to earn a living wage.

Kenney not only has pushed his privatization agenda since the beginning of his term, but decided that the pandemic was a good time to lay off 11,000 health care workers in the name of “outsourcing”. This proposed cut led to the first wildcat strike in the province since 2013. In November, the government passed Bill 46, The Health Statutes Amendment Act, which will keep Alberta health-care union leaders out of being elected or appointed to governing boards.

In July, the government also passed Bill 30, The Health Statutes Amendments Act. The bill makes changes to oversight, regulation and approvals of health care associations, and allows for a new type of contract between the government and private corporations through subcontracting. Bill 30 enables the direct bypass of the Alberta Medical Association as the legal representative body for the province’s physicians, and raises questions about the effect privatization will have on quality care.

It is clear that the second wave of COVID has no sign of slowing down, and that this government is putting profits over people. Intensive care units across Alberta continue to be overwhelmed, with COVID-19 patients spilling into other units as the number of beds decline and the virus becomes the 11th-most common cause of death in Alberta. While cases are trending downward, the government recently announced that restrictions will be eased on February 8.

One of the major things that the virus has revealed has been the necessity for legislated paid sick leave. Giving workers the ability to stay home and stop the spread of COVID-19. 58% of workers across Canada don’t have a single paid sick day. Back in March, Jason Kenney made a promise to provide 14 paid sick days for Alberta workers, but quickly backtracked making these days non-paid. Workers and public health experts across the country have been calling for universal, employer-paid, permanent sick days.

Since the pandemic began, meatpacking workers have been some of the most vulnerable to COVID-19 exposure, with a majority of early cases being found in meatpacking plants and continuing care facilities. Government mismanagement has resulted in thousands of deaths.

Cargill High River meatpacking plant is a prime example of the ways health and safety legislation is lacking. At least 950 staff at the Cargill plant — nearly half its workforce — tested positive for COVID-19 in early May; the largest workplace outbreak in Canada. Despite a live video inspection conducted by Alberta Occupational Health and Safety, the OHS allowed the worksite to remain open despite the dozens of cases of infected workers and demands to close the plant early on.

UFCW 401 filed unfair labour practice complaints against Cargill and the Province of Alberta for reopening the plant after 3 workers had died, and the RCMP is currently investigating Cargill for criminal negligence. In addition, there are currently ongoing proceedings at the Alberta Labour Relations Board to seek compensation for Cargill workers who were impacted financially by the outbreak. Minister of Education Adriana LaGrange, who laid off 26,000 education workers in March and has removed the cap on the number of charter schools allowed in the province (with a Calgary charter school approved last week bringing the total number to 14), is also the aunt of Cargill’s general manager.

Like many provinces, Alberta has failed in safely reopening schools. In September, Ministerial Order 33-2020 stated that masks and two-meter social distancing would not be mandatory in classrooms. Given the deterioration of public schools and packed class sizes, it was clear to education workers and parents that distancing in classes of 35 or more students packed into one room was next to impossible.

One week after re-opening, over 23 schools identified COVID-19 outbreaks. According to public education advocacy group Support our Students Alberta, there have been 1164 schools with outbreaks since August 30, with 181 schools reporting cases in the past two weeks.

A head spinning number of Bills have been passed in the legislature over the course of the pandemic. In the summer, the government brought in unconstitutional Bill 1, the “Critical infrastructure Defence Act”, which seeks to give crushing fines to land defenders and protestors and allows police to arrest anyone in violation of the law without a warrant. The bill preceded Bill 32 “Restoring Balance in Alberta’s Workplaces Act” which puts restrictions on guaranteed mandatory first contract arbitration, certification and remedial certifications.

With the passing of Bill 32, it makes the process for union certification longer, extending it to resolution within six months. Similarly, it makes remedial certification harder to access for workers who experience unfair labour practices (such as firings and interference in organizing drives) at the hands of bosses.

One of the most concerning aspects of the bill is that workers are now forced to opt-in to pay the portion of union dues that go towards funding political action. Bill 23 has made Alberta the only province in Canada to restrict the ability of unions to raise public awareness and campaign on issues that affect the lives of all workers, from health care and child care campaigns to the fight for a higher minimum wage.

This hasn’t been the last of anti-worker legislation over the past year. Despite the push from workers to invest in the public sector over the past several decades, Kenney’s austerity government is continuing to push the narrative that the province is facing down a huge deficit, attempting to justify the cuts to the public sector all the while having given $4 million dollars to the NHL for the playoffs, backroom deals with union busting law firms and tax breaks to the richest corporations in the province.

Bill 47, the “Ensuring Safety and Cutting Red Tape Act”, was passed in early December, making several changes to the Occupational Health and Safety Act and the Workers’ Compensation Act. One change limits presumptive coverage for psychological injuries only to first responders. The Bill also ensures that employers appoint who sits on Joint Health and Safety Committees, and removes worker representatives from being present during the investigation of allegedly unsafe work.

Finally, Bill 22 the “Reform of Agencies, Boards and Commissions and Government Enterprises Act” which goes after the Alberta Teachers Retirement Fund, the Special Forces Pension Plan, and the Public Service Pension Plan (PSPP) and Local Authorities Pension Plan (LAPP). The Bill allows for AIMCo (a government owned and controlled agency) to manage all investments, and ignores joint-governance bodies and takes away the autonomy of the pension boards managing our plans.

Amidst Kenney’s “knock it off” messaging to Albertans and calls for personal responsibility, workers are continuing to organize despite the pandemic shock doctrine that has come from the austerity peddling majority government.

The cut first strategy pursued by Kenney to address the crisis puts Alberta at odds with how most other provinces and the federal government are choosing to handle the economic and public healthcare crisis. There is little doubt that Kenney’s austerity policies will only succeed in deepening the existing divides in the province. As the pandemic drags on and the pain, suffering and attacks mount, resistance can seem futile. Some may choose to weather out the storm, hoping that Kenney’s unpopularity grows and the NDP can win the election.

This would be an error. Kenney’s low poll numbers show there is a large sentiment of people who are opposed to the government’s austerity laden strategy of addressing COVID-19. That sentiment has to be organized and transformed into action, otherwise it will dissipate long before the next election.

Movements on the ground such as the wildcat by healthcare workers shows that workers can and will stand up to Kenney’s attack on public services and workplace rights, even in the middle of a pandemic. Mutual aid networks have popped up across the province and have reimagined what community can look like.

In Edmonton, groups like Beaver Hills Warriors, Treaty 6 Outreach and Black Lives Matter Edmonton have organized to support people living rough who face police violence and poverty by providing food, medical services, clothes and other supplies. Local migrant justice group Migrante has campaigned on the necessity of getting health care for all workers, including those that are undocumented. In Calgary, projects from community fridges which combat food and financial insecurity to street outreach teams have seen mass support.

Kenney has already shown his weak spot; in September, when he threatened to cut the Assured Income for the Severely Handicapped (AISH) program, there was a huge public outcry that resulted in a massive victory and drew attention to the inadequate funding that AISH recipients receive. Combined with their downward spiral in polling, there is a real potential to seize on the widespread disapproval of the government in order to defeat their austerity agenda.The road to recovery and necessity of organizing to prevent another global pandemic has never been more clear. COVID has deepened the existing inequality and inequities everywhere.

When the pandemic is eventually beaten back through vaccinations, it will leave behind a changed political and economic landscape for workers. Labour in Alberta has an historic opportunity to reforge working class solidarity and militancy on this new terrain to take on Kenney’s big business agenda.