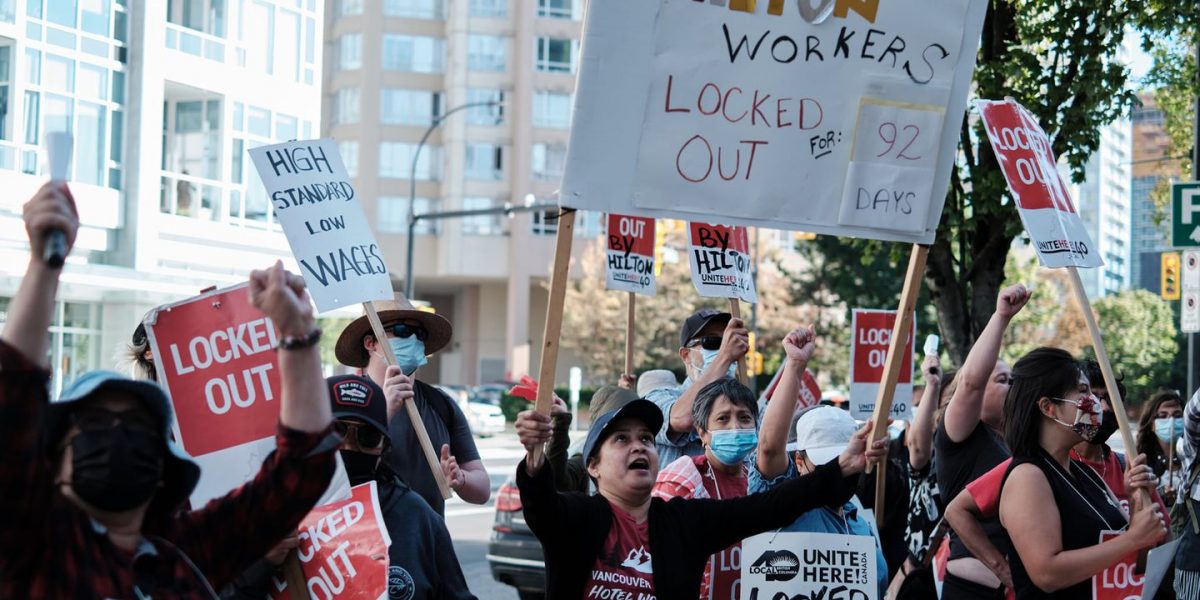 Since mid-April, Hilton Metrotown staff in Burnaby have been locked out following the termination of 97 workers a year into the pandemic. The fight at the Hilton is part of a broader attack by employers on hotel workers across BC. Hotels are asking workers to agree to 6-year wage freezes, elimination of union pension and healthcare, and no recall rights.

These hospitality workers, the majority of whom are women of colour, say they aren’t going to accept this contract stripping. They and their union, Unite HERE! Local 40, argue that this is pandemic profiteering. They are actively building solidarity with other workers to fight back against this mistreatment. On August 5, the union’s BC’s Unequal Women campaign is organizing a rally in Metrotown to send a message to the employer and to government that the workers won’t back down, and that they have broad community support. Spring Magazine spoke to Baljinder Kahlon, a laid-off hospitality worker at the Metrotown Hilton.

You’ve been working at the Hilton for a really long time. What happened?

I was working at the Hilton since 1999, before the opening of the doors of this business. I was there for a long time. We’ve been through a lot of experiences–with FIFA, with the Olympics, with renovations, with big groups coming in and out–and we were kind of the backbone of this company. The hotel grew so much while we were working here, but now the company is using the pandemic as a reason [to get rid of us]. All we’ve asked for is for Hilton to extend our recall rights. It was not going to cost anything to the company, it would just be respect for us.

We long term employees were let go with disrespect. That is very hurtful for 97 of us, we were the most senior people. I’ve been supervising for 30 plus years now, that’s a long time. I was number one in seniority, and I was taken off from my job. My job did not go anywhere, it still exists. The hotel is still running, the housekeeping department is still running.

It sounds like you had a good job. What’s the impact of these job cuts?

It was. I was looking forward to retiring from that job. Looking forward to retiring from the place that you loved working and loved your job. Loved the people that you worked with. We were a very good team. We spent a good eight hours a day of our life there. Morning to afternoon. And I never showed them my back at all. Everything, any situation that comes, we made ends meet by the end of the day. Left every single room nice and clean for the revenues to come in.

At age 60 I was let go. It is very hurtful, I felt very disrespected. We were like a Hilton family; our family is broken down now.It is very sad what has happened to all of us. And now we have been out there [on the picket line] over 100 days already. And the majority of us are women of all colours that were let go. We have kids attending universities, colleges. [We need] to put the food on the table. The majority of us are single moms. We all have mortgages, bills to pay.

Why is the company doing this?

I have the feeling that they want to get rid of the people with the most benefits, the wages that they’re earning, so they can get somebody for cheaper wages. This is what I personally feel and this is what all my coworkers are feeling. Often we discuss among each other, and the majority of us are very high in seniority, and were let go first. I was at full vacation, full wages, they gave me incentives too–so you can see what kind of employee I was. We tried our best. We supported this hotel so much. We were the backbone of this hotel. And this hotel company grew because of us.

I just wish the Hilton should do the right thing to bring all the family back together. Think about everybody with children. Everybody has families to support, everybody has bills to pay. It’s been long enough. There’s always a solution to every problem. I offered every way I could. That’s what hurts me the most. So where’s my loyalty for 21 years? This is what I get?

What are federal and provincial governments doing?

We appreciate the federal government sees all this. I don’t think they should be giving all this money to the tourism industry until they bring all the workers back. Our clients or customers are so used to our wonderful service, they come back because of us–our front desk staff, our room attendants, our banquet staff, restaurant staff. Everybody was working very, very hard, willing to work hard again.

We were on a hunger strike action in front of the Legislature in Victoria. We haven’t heard too much from there yet. I just wish they’d stand up and see what’s going on here.

You’re still fighting, including biweekly rallies and a big action on August 5. Why is this upcoming action important?

Yes. We will be all there. It’s very important, because all the other unions, all the other [workers from] big companies that feel our pain [will be there] and they’re supporting us, and we appreciate them very, very much. We want to let the hotel know that we haven’t lost. We are still standing strong. We will stand strong until the solution comes.

Why is solidarity important to you and other Local 40 workers?

It is very important for all of us to get our jobs back. If they [other groups] don’t support us, we are just by ourselves, so we appreciate them supporting us. They strongly feel our pain.

That’s why the local unions are standing by us, even the city of Burnaby is standing by us. Jagmeet Singh showed up and he’s supporting us. We had a meeting with him on zoom, and one day he dropped by and came to see us. Everybody is saying that they [Hilton] should bring all the workers back. But so far, negotiations are not reaching anywhere.

But we’re standing strong, we will be in front of the hotel again. We’re all together. We are fighting back as long as it takes, doesn’t matter, we are all there together.

UNITE HERE! Local 40 is holding a family friendly rally and sit-in. On the anniversary of the ongoing labour dispute, hotel workers are calling on allies and the community to join women leaders taking part in a sit-in on Kingsway and Willingdon. Those who want to support workers are invited to stand in solidarity. When: 5:00 PM, Thursday August 5. Where: Hilton Metrotown (6083 McKay Ave, Burnaby, BC V5H 2W7). Event: https://www.facebook.com/events/498439964549646 Local 40 workers are asking supporters to share this call to action widely, and to bring their pots, pans, whistles, and noisemakers to the action on August 5th.