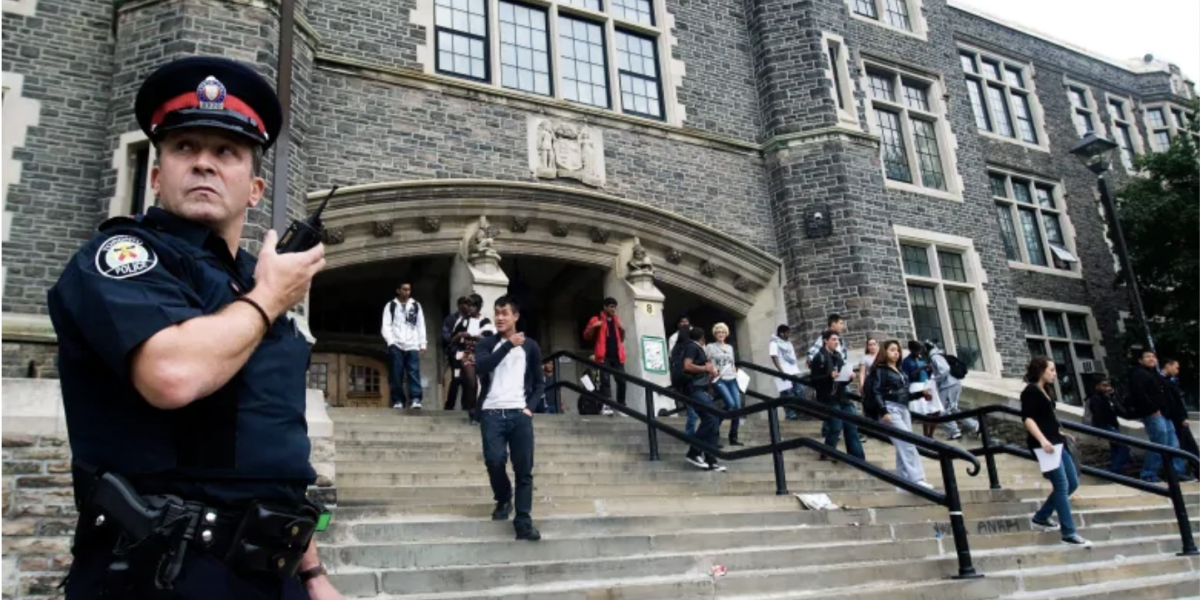 With the Movement for Black Lives showing that it is possible to defund and even disband police departments, activists across Turtle Island are now turning their attention to getting police officers out of schools. The fact that the armed, uniformed police officers in schools are part of the same forces that harass, brutalize and kill Black, Indigenous and other marginalized people is not lost on parents and students from those communities and their allies. Now that the uprisings in the U.S. have created this opening, activists in Vancouver are demanding real change from their school board, and not just more public statements about their commitment to ‘diversity’.

In Burnaby, BC, one of the first signs that the climate might be favorable to eliminating cops in schools was the response to an RCMP School Liaison’s video welcoming Burnaby students back after COVID-19 closures. After community outcry, the video showing police officers wearing bulletproof vests and sidearms was pulled from twitter by the RCMP.  While mainstream media were quick to amplify arguments that cops made students safer, Haleluya Hailu, a 17 year-old Black student in Burnaby, addressed the pro-cop arguments head-on: “If you want to get rid of gangs and drugs, having a 30-year-old dude in a bulletproof vest isn’t going to stop that,” she said. “I’d rather see students making connections with counsellors, teachers and educators who are there first-hand dealing with these students more actively and every day.”

From school resources to officers

The defund the police campaigns have highlighted how police funding has risen while social services funding has been slashed, and school police programs are no different. Cops in schools are called “School Resources Officers” (SRO; or School Liaison Office, SLO) as though cops complement school resources, but they represent the replacement of school resources with police officers. While counsellors, youth workers and educational assistants’ jobs have all been cut, police budgets have increased; in Vancouver, the police budget has almost doubled since 2008, while school budgets have increased a measly 5% over the same period.

Vancouver teacher and union and social justice activist Preet Lidder explains how cuts to education funding have enabled police presence in schools: “[police have begun] to provide services that the school kind of desperately needs because it’s been in B.C. 16, 17 years of [funding] cuts and it’s a bit of a parasitic relationship…because I don’t think the school board actually foots the bill. The police are like, ‘Oh, well, we’ll help you with these services’…the police officer is not just the cop, they’re the counselor, they’re the social worker, they’re your buddy, they’re on your field trips, they’re a coach.”

Edmonton trustee Bridget Stirling agrees that cops don’t seem a good fit for schools: “When people talk about what the SRO in their school does, they talk about how they build relationships with students, and how they help out with students who are struggling with mental health and things like that,” she said. “But you don’t need someone with a badge and a gun to support a student who’s struggling with mental health concerns.”

The Vancouver Elementary School Teachers Association, (VESTA) showed leadership on this issue by passing a motion calling for schools to start the process of eliminating police presence, and published useful background information for school union reps to use in discussions around this. In their letter from teaching staff at ¿uuqinak’uuh (Grandview) Elementary, teachers explained why they supported the VESTA motion:

“Like many schools, we used to have an annual community event that was attended by uniformed police officers. Parents asked for them not to be invited because their presence was triggering trauma for some children and families. There is a very real history and present threat of violence towards Indigenous people by police and RCMP. The parents gave examples of how they and their children experience this trauma, including: being victims of police brutality or having loved ones who have been murdered by police; their children – our students – have witnessed police violence towards their parents in the community; and police have been involved when children were taken from their families. In light of these accounts, it was clear that we had a responsibility to honour the trauma that was being shared with us. In order to make our students and families feel safe at school, we needed to not have a police presence at our events.

As we reflected on these events, we realized that Indigenous parents had the power to speak out because they are in the majority group at our school. And, still, it took several years and much emotional labour for changes to occur. Parents should not be put in the position of explaining their trauma to educators, and parents across the district should not have to be asking for these same changes at the individual school level. If we are serious about reconciliation, we, as a district, should learn from the brave parents who were able to speak out at our school.

We are concerned that police presence can be traumatizing for many Black and Indigenous people. At schools where they are the minority they may not feel safe to share their experiences. We believe this is an issue for all schools, not just those with high populations of Black or Indigenous students.”

While VESTA can’t make policy for schools, they did call on the Vancouver School Board (VSB) to follow their lead, and end the placement of police officers in schools. COPE school trustee Barb Parrott brought a motion to the VSB to eliminate the SLO program, but the board unfortunately only voted to review the program without suspending it.  However, there is still time for community members to add to the pressure to act on this: a petition to support police-free Vancouver schools has gained more than 2750 signatures.

The petition’s authors explained the racist roots of the RCMP as part of the genocide of Indigenous peoples on the Prairies, and pointed out that “In 2017, Indigenous people accounted for over 16% of street checks, despite making up 2% of Vancouver’s population, and Black people accounted for 5% of street checks, despite accounting for only 1% of the population.”

Preet Lidder found that whether there is a frequent police presence in a certain school “depends on the ethnicity and socioeconomic background of the students.” So in schools that are in less wealthy, more racialized neighbourhoods, there tends to be a constant police presence. As she explained, “there’s so much research, the research has just showed that…you have more presence of police, you have more non-violent crimes that are being reported and being brought to police; that’s the nature of having that sort of proximity to law enforcement all the time.” Lidder mentioned that one issue with this, is that a school-to-prison pipeline develops for kids from these communities.

Lidder and others have pointed out that other school boards, including the Toronto School Board in 2017, have already eliminated police presence in schools due to pressure from the community, showing it is possible. Indeed, grassroots mobilization in Hamilton kicked cops out of schools just last month.

To the critics of the movement for police-free schools who argue that teachers should “remain neutral” on this issue, Preet stated: “We have to keep the safety and well-being of our children at the forefront… that is our role… we’ve always been there to advocate for their safety and this idea that you’re supposed to stay neutral? Well actually, no. Schools are not neutral spaces.”

One challenge that Lidder identified in following the lead of the successful US movement for police-free schools was the myth of Canada as a place where systemic racism doesn’t exist. But that doesn’t mean that she and other activists are giving up. As she explained,

“The data is starting to come out, and people have such a resistance to looking at it, because it disrupts their notion of this country being safer and better. And I think as teachers we have to keep pushing back. Like how many does it have to take? How many Black and Indigenous or racialized students? How many will it have to take to say, ‘we’re unsafe‘, for us to say ‘enough’? … it should be enough.”

Sign the petition for police-free schools in Vancouver here. For those interested in supporting the movement for police-free schools, we would also encourage you to join the related movement to defund, dismantle and disarm the police in Toronto, Vancouver or the city where you live. In Vancouver, you can contact COPE to find out how you can support councilor Jean Swanson’s motion to defund VPD that will be coming to City Hall July 21.